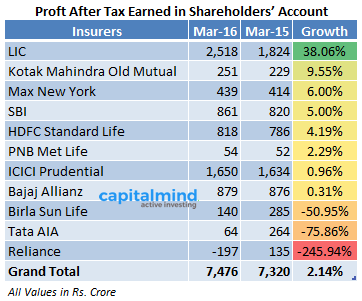 Today is the second edition of the numbers crunched Capitalmind’s Data Monster. You can catch the first installment of this in the here:

You Won’t Believe How Much Insurers Have Lost Since The Misselling Epidemic in 2011: The Insurer Chronicle

Now we look at insurer profits. They take the insurance risk, but are they really profitable? It’s not useful really to see this in the early days of insurance – their customers are young, and not enough people are dying, so their payouts are not that significant; which means they should have some decent profits going forward. But the older players will have some level of stability.

With HDFC and Max working through their merger and ICICI Prudential on its way to listing via IPO, this sector will become big on the markets as well. HDFC and Max show about a 5% growth in profit, which is around 1110 cr. together. This is still lesser than ICICI’s 1,650 cr. profit which, though, has been flat from the previous year.

2 private players in the potential ability to list in the markets would be Kotak Mahindra and SBI who both rank #3 and #4 respectively (post Max and HDFC merger). Kotak grew nearly 10% on profits, while SBI was at +5%.

Investors should use caution in approaching the laggards such as Birla Sun Life, Tata AIA and Reliance which have witnessed de-growth of profits both in double and triple digits.

The top players in the Insurance industry don’t seem to have good profit growth, though at this point it may be a little unfair to compare pure profitability since the business hasn’t stabilized. The profit growth of LIC is definitely very attractive, and given how private insurers are looking to list in the stock exchanges, that pie is going to be attacked over time. But at some point, growth needs to be much higher than the numbers we’re seeing now.