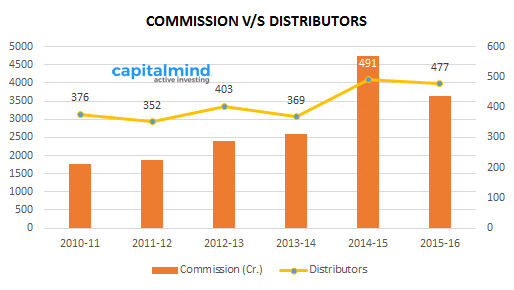 What you didn’t know about Banks and other Large Mutual Fund Distributors: They’re losing commissions in a big way!

Today we take a look at the commissions paid to these Distributors and their trends over 6 years. Data has been sourced from AMFI India.

AMFI discloses the annual commission paid by various Asset Management Company (AMC) to the distributors every year to bring awareness among customers informing them about the earnings (trail commission and upfront commission) made by these distributors from the customer’s investments in MFs.

While a customer exactly cannot identify commission earned by the distributors from the customer’s investment alone, come October, 2016 and ‘commission disclosure rule’ will become operational. This means that if you invest in mutual funds through a distributor, you are likely to know the exact amount of money he is making off you including pay-outs in the form of gifts and sponsored trips.

Now back to our analysis. For the year ended March, 2016 – a total of 477 ARN holders (AMFI Registration Number) received commissions ranging from Rs. 5.48 lakhs to Rs. 326 crore with an avg. commission amount of Rs. 7.64 crore.

Compare this to the year ended March, 2015 – a total of 491 ARN holders (AMFI Registration Number) received commissions ranging from Rs. 5 lakhs  to Rs. 407 crore with an avg. commission amount of Rs. 9.66 crore.

We have categorized these distributors into 4 separate groups: FIs are the largest players in the distribution game.

Constituted by the Institutions with the largest bank rolls (just speculating), Financial Institutions pocketed Rs. 2/- for every 3 rupees earned by the Distributor community. This has been a constant trend over the past 6 years with an avg. commission earning of Rs. 1,939 crore.

NJ IndiaInvest  is one of the leading advisors and distributors of financial products and services in India. While it’s shown they made 326 cr. they probably actually made a fraction of that amount – many distributors use NJ for their technology needs, and NJ is the primary distributor while they become sub-distributors, but NJ passes through nearly all of the commission to the sub-distributors.

The big deal here is that the big banks are seeing a major drop in commissions. ICICI and Kotak saw a 31% drop while HDFC Bank is seeing commissions own 20%. Axis bank’s commissions are down 50%! Only Credit Suisse has seen a large increase in commission (62%) in the top 10.

Constituted by the Brokers, Wealth Management Services and other credit companies, the Advisors pocket fall behind Financial Institutions in terms of highest commission earned.

The leader of the table Darshan Services jumped from Rank #3 to Rank #1 with a massive growth of 185%. Darshan Securities is engaged in providing financials services and is based in Mumbai headed by Mukesh Harilal Shah (DIN 00014741) and Satish Ramanlal Parikh (DIN 00094560).

Other notables in this Top 10 include Julius Baer Wealth Advisors which made their entry in India only during Sep-Oct, 2015. The Swiss banking group set up shop in India almost three years after acquiring DSP Merrill Lynch’s domestic wealth management business. At the time of the deal, Merrill Lynch was the largest wealth advisor managing domestic assets worth Rs 25,000 crore.

Batlivala & Karani Securities a SEBI registered Category I Merchant Banker also having Insurance Broking and FX Broking affiliates witnessed an 80% jump in its commission earning this year. From a meager Rs. 6 crore in 2010-11, it earned Rs. 14 crore in 2015-16 almost doubling its income base. 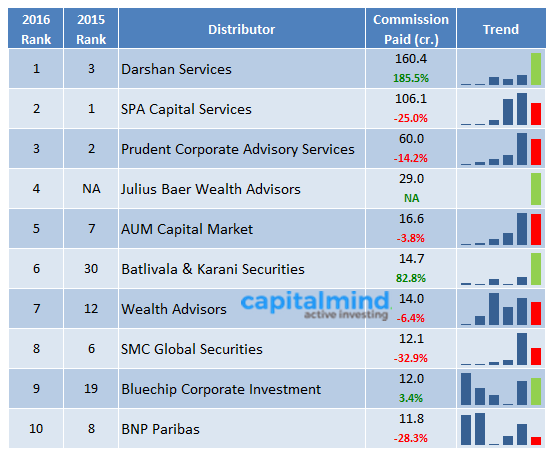 The Fin Tech space is occupied by 2 companies alone. Scripbox as many of you know provides some specific funds to invest in while Funds India has varied choices.

While FundsIndia has earned 11.4 crore, Scripbox earned just 1.1 crore. Commission earned by Scripbox for the year 2014-15 is not significant and what it earned in 2015-16 is equivalent to Funds India’s commission earning of 2012-13.

Distribution is a tough business. Scripbox raised Rs. 16 crore in August 2015, but has only seen an income of Rs. 1 crore through commissions in the entire year. Hopefully they’ll do better in the coming years.

FundsIndia raised Rs. 70 cr. in Jun 2015, and their earning of Rs. 11.4 crore too isn’t all theirs. Their “Fund Advisor” model allows other advisors to use an NJ type model (remember, NJ made 326 cr. in commissions), so the
y must pay commissions through to their (sub) advisors. Overall, this seems to be a tough market with both these startups not earning substantial revenues yet compared to the amount they have raised.

There are so many more fin-tech startups now that do mutual fund intermediation. Let’s see next year how much commission each one can make.

Individuals are considered the Foot soldiers of the Mutual Fund Industry. The commission earned by Rank #1 stood at a measly Rs. 5.8 crore by Dhruv Lalit Mehta. 2 of the Top 10 Individuals were women distributors who cumulatively earned Rs. 8.3 crore and have significantly jumped rankings from #110 to #3 and #10 to #5. Of the remaining 8 distributors, 5 were part of the Top #10 rankings during the previous year as well.

Dhruv Lalit Mehta, Roopa Venkatkrishnan, Mukesh R Parikh, Ganesh Shridhar Shanbhag and Paresh Shantilal Kariya all hail from Mumbai while the remaining Top #10 distributors R K Agrawal hails from Delhi, Manjula S from Varanasi, Gaurav Ganpule from Pune and Ashish Modani from Jaipur. 8/10 distributors have been earning commission since 2010-11 while Ashish Modani made his entry in 2013-14 followed by Paresh Shantilal Kariya in 2014-15. 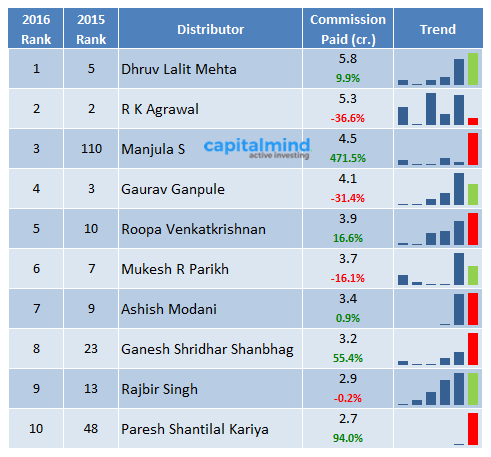 Mutual fund commissions seem to be reducing. For one, higher valued customers are going direct. This is going to happen in debt funds for sure, where the scope for commission is low. In equity funds too, it will be a move over time.

Secondly, banks are losing the plot. They have always been a trusted source for customers to invest, but after years of mis-selling, banks are seeing customers walk away from them. It is indeed true that if your banker advises you to buy something, you should investigate it thoroughly because most of the time they have their own best interest in mind, not yours. And now, it’s apparently common knowledge. Banks have seen a major reduction in AUM growth rates in FY16, some by half (though some of this is due to the differential in stock market returns as well).

Update: We have a clarification from Manoj Nagpal (@nagpalmanoj), who told ET that Banks could no longer get large upfront commissions as AMFI asked MFs to cap upfront commissions to 1%. (Banks used to discount commissions in closed ended funds and tax saving funds by taking a larger amount upfront and lower trail commissions)  This could be the case, that the commissions last year were a one-off.

But we calculated the commissions as a percentage of AUM, and we noticed in nearly all banks, the commissions in FY16 as a percentage of AUM have dropped severely, even below the FY14 levels. For example, Axis Bank made 1% of AUM as commission in FY14, 2.09% in FY15 and 0.70% in FY16. This is 30% below even FY14 levels, which means FY15 could have been an aberration but a lot more has happened than just that aberration.

Finally, mutual funds are cutting commissions and attracting customers through technology. We have a Reliance mutual fund which offers a debit card and now, the ability to withdraw within two hours. We have much better ways to access mutual fund websites directly. They’re advertising. They’re moving into smaller towns. And they are reducing total expense ratios and cutting down on commissions. This is a welcome sign of an evolving industry.

Eventually, commissions will have to go further down. Technology based small-to-large ticket investments will be the call of the day. People who intermediate will have to do serious value additions – including the startups – to survive. Banks who aren’t reading what’s getting etched on this wall are going to be crying in investor meetings about how these stupid customers aren’t so stupid any more. These are wonderful times, and torturous times, depending on who you are.

Hope you have found this article useful. If you would like to see any other features added to this, do leave your feedback in the comments section below.