Online fashion retailer Jabong has been sold for a not-quite-so-whopping $70 million in cash. GFG, the company that owns it, said in a press release that they sold it to Flipkart, and it seems be because the company is losing money and isn’t showing the kind of growth metrics they want.
GFG itself is owned by Rocket Internet, for whom this will be a not-that-great exit. Jabong, whose financials are revealed by the listed Rocket Internet, shows the company has been losing money in a big way: a 60 million euro loss in FY 2015 after a 56 million euro loss in 2014 shows the damage. 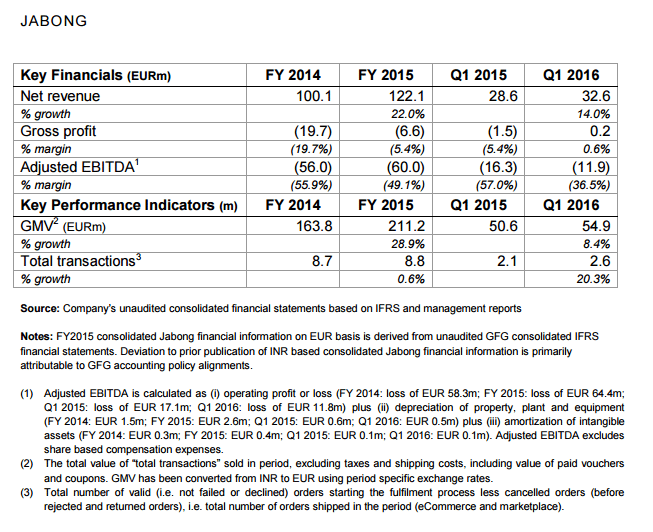 While losses look like they’re getting better, we don’t think they really are because the owners were looking at a much higher valuation before settling for a puny $70 million.
Much has been said also by TheKen about how Jabong’s owned logistics firm, GoJavas, was somehow usurped by the Jabong founder Praveen Sinha, who eventually sold 5% stake to Snapdeal at what seems to be a $180 million valuation. This smacks of corporate governance issues which are quite as rife in startups as they are in public companies, apparently.

That there is no big deal.
The $70 million payout is nothing. Think about this. $70 million is roughly 470 crores. Jabong lost 130 million euros in FY14 and FY15. That is nearly 950 crores. And then an other 12 million euros in Q1 2016, which adds another 88 crores of losses – that’s over 1,000 cr. of losses since 2014. Obviously Rocket Internet funded that loss, and they’ve lost more than 50% of their investment – and possibly more, if there were further losses we don’t know about.
What does Flipkart get? Well, financially, 1000 cr. of losses means about 300 cr. worth profits that can be written back. (If they ever earn a profit that is) In real terms, a profitable company can buy Jabong and use the losses for a few years more and pay lower taxes. So effectively, Flipkart got the 300 cr. loss offset – which, if its so inclined, they can probably sell off for about 100-150 cr. to someone else.
Flipkart also gets to keep Jabong away from competition, which might acquire it and use the brand to get to those 2.8 million orders a quarter that hopefully actually existed.

Interestingly, from a tax angle, this will be interesting. Flipkart will probably have to deduct withholding tax from the payout, because this is an acquisition of an Indian business. This rule is what is being used against Vodafone about its acquisition of Hutch in India – that Vodafone should have deducted taxes before they paid the Hutch owners, because the thing being sold was primarily Indian.
Rocket will then get lesser than the cash amount they bargained for, even if Flipkart pays through its Singapore parent. Because the residency of the buyer and seller don’t matter, in Indian law.

Indian startups are going through a little bit of a tough time. Flipkart’s seeing its institutional holders cut their valuation numbers. Quikr bought Hiree, and NowFloats bought Lookup in what seem to be acquihires rather than strategic acquisitions. This deal by Jabong, in the two-digit millions of dollars when they have burned through at least two times more money in the last two years, smacks the big valuation numbers in their face.
At this point, what’s really needed is a big deal that provides an insane valuation. Like a Dollar Shave Club for $1 billion, where actual cash is realized on a sale. Or something like that. But the only thing that seems to be doing well on valuation is the listed Infibeam,  which is up more than 50% on listing. The madness in the stock markets hasn’t really translated to the private valuations of startups. And apparently, the private startups aren’t even thinking of listing in our mad-markets. Such is life.