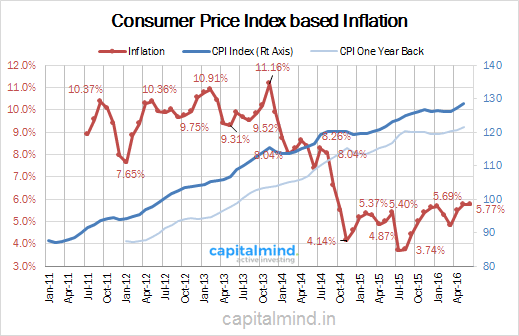 Inflation seems to be going up yet again, as it hits a 5.77% level in June. This is the highest level of inflation since September 2014. Remember the crude oil prices crashed in October 2014 and inflation went down substantially, but has been going back up in the last few months. The RBI has to keep inflation under 6% under its mandate and the thick blue line underneath seems to be showing a steepening impact.

Food inflation has struck again – food is nearly 46% of the CPI, and contributes heavily to inflation numbers. Fuel prices have been somewhat stable, it appears, with inflation only at 3%. However, there was a spike in fuel prices last June, and those prices fell in the last half of the year – so we expect that fuel price inflation will also steadily increase in the rest of the year. 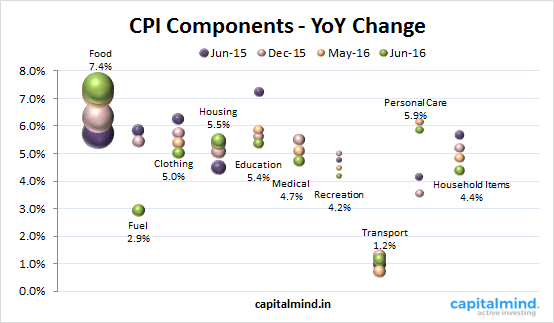 While rural inflation has been low, the issue is with Urban Inflation, which is also now at the highest since December 2014. And the only saving grace is that if you exclude food and fuel, the rest of the CPI basket is not heavily inflationary. Yet. 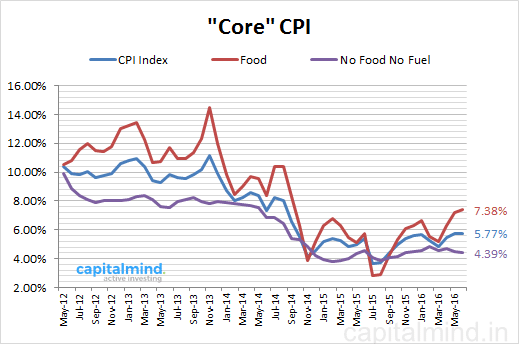 We say “yet” because it takes a few months of a lag before food and fuel price inflation starts impacting other things.

Our View: Not Easy To Cut Rates

Even though Rajan will leave, and even though another, pro-cut RBI governor comes, it will be difficult to cut rates in the face of this information. Rates have fallen in bond markets already – the 10 year is at 7.32%, after going close to 7.5% very recently. Rates have fallen substantially in wholesale bond markets where even companies like Reliance Jio are able to see yields less than 8%.

Since for the corporates that really matter, rate cuts are already here, why are banks not cutting rates? Because they don’t want to. They will even buy those Reliance Jio bonds (effectively lending at less than 8%) but won’t cut their base rates or MCLR down. They refuse to lend at lower rates to the public – they are, even now, placing excess cash with the RBI at 6.5% instead of giving it out to people like us.

Given that statistic, a rate cut might still not work in pushing retail interest rates down. And the new RBI governor will not do any justice if a) rate cuts don’t force banks to cut their lending rates and b) inflation continues to rise. Let’s hope the monsoon brings cheer to food buyers and lowers inflation, at least.