Today we bring you the Indian Automobile Sales Report for the month of June, 2016. You can catch the previous month’s report here.

Closing the first quarter of the current financial year, the two wheeler industry grew at 12.5%. While Royal Enfield (part of the Eicher group) continues to be the outlier, Honda is going all out eating into Hero MotoCorp’s market share with increasing production across all its facilities.

Note: Mahindra 2 wheelers (which has announced an overhaul of its 2 wheeler business with product revamp, including cutting costs, reducing manpower to 400 from 1,100 workers and focusing on higher margin premium scooters and niche lifestyle motorcycles) and Suzuki India (which has followed Hero MotoCorp’s footsteps and has tied up with Paytm to provide online booking of all Suzuki two-wheeler models on Paytm platform PAN India) are yet to disclose their sales figures for June, 2016

Feeling the worst behind on the company’s exports to Nigeria to which it exports over 40,000 motor cycles and 4,000 three-wheelers per month, Bajaj is hoping for a much better prospect in the next six months from the Nigerian market (more here).

For FY17, Bajaj is focused on increasing share in the value segment with the launch of the V15. Bajaj Auto has been able to enhance its position in the entry level segment through models like the new CT and Platina, while it has also done the same in the premium segment. The company hopes to improve its market share to 47% in the premium segment. It is also focusing on increasing market share in the mid-end motorcycle category (more than 110cc to less than 150cc). 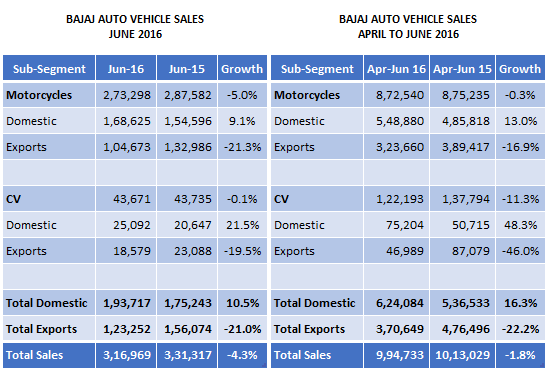 The company will soon introduce Splendor iSmart 110 motorcycle in the market – the first motorcycle to have been completely developed by the in-house R&D team at Hero MotoCorp.

With the implementation of the 7th Pay Commission and the forecast of an above-average monsoon, the company is cautiously optimistic about a pick-up in sales momentum.

Crossing 10,000 units in sales of its 100% “Make in India” product the Navi, Honda Motors has now upped its pace to eat into Hero MotoCorp’s market share.

Honda is planning to add a new line at its Narsapura facility in Karnataka which would increase the production capacity to 2.4 million units from the current 1.8 million units at an investment of Rs. 600 crore. This is in addition to the already inaugurated 2nd assembly line of its fourth manufacturing plant at Vithalapur (Mandal taluk, Ahmedabad district) in the western state of Gujarat.

Honda is also increasing its foot print across the country from the current 4,500 outlets to 5,400 outlets by end FY17, a major part of which would be beyond tier-II cities.

Yadvinder Singh Guleria, Honda Motorcycle & Scooters India said: “Our take on scooters is that they will continue to drive the 2wheeler demand in the market, and secondly, primarily the 110 cc is going to continue to dominate the total 2wheeler market scenario in terms of volumes” (more here).

After the successfully launch and demand of its complete range of gear and accessories, Royal Enfield has now launched its products on India’s leading e-commerce website Flipkart.com.

Samrat Som, Head- Gear Business, Royal Enfield said “With more and more people riding out, there is a growing need for appropriate gear and accessories amongst these riders. We believe that in a market that is currently underserved with respect to quality riding gear, our products will augur very well for our existing and potential customers,” said. “Our apparel and gear range is a natural extension of our core business; we believe the brand Royal Enfield allows its consumers to express themselves and with this range of products, we are able to be part of our consumers’ lives beyond riding.”

Royal Enfield again had an outstanding sales for the month of June, 2016 with sales increasing over 38% for the quarter and 35% for the month.

Royal Enfield is strengthening its research and development (R&D) focus to take on international competition. For 2016-17, Royal Enfield has announced an investment of Rs. 600 crore in building strong foundations across all areas of its business. A part of this will be for setting up two technical centres in Leicestershire (UK) and Chennai.

TVS Motor received the patent for a gearshift assembly for semi-automated manual transmission (SMT) vehicle, which could change the way the rider shifts the gear in a motorcycle.

TVS Motor is the first company to launch a clutch-less bike in India, under the brand TVS Jive. With the invention which received patent now, the rider can operate a switch provided on a handle bar of the SMT vehicle to shift a gear, as against using the gearshift lever near the footrest of the conventional motor cycle (more here).

TVS has been in the news over ‘disparaging’ ads by Bajaj Auto claiming a higher mileage to TVS products. According to the court order, the ads compared the fuel efficienc
y of the two products “on the basis of false figures” (more here). 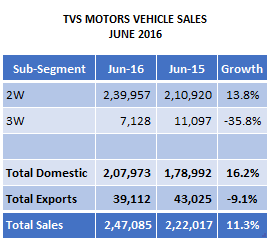