Today we bring you the Indian Automobile Sales Report for the month of June, 2016. While this post covers the Passenger Vehicles and Commercial Vehicles alone, you can catch the Two Wheeler Report here. 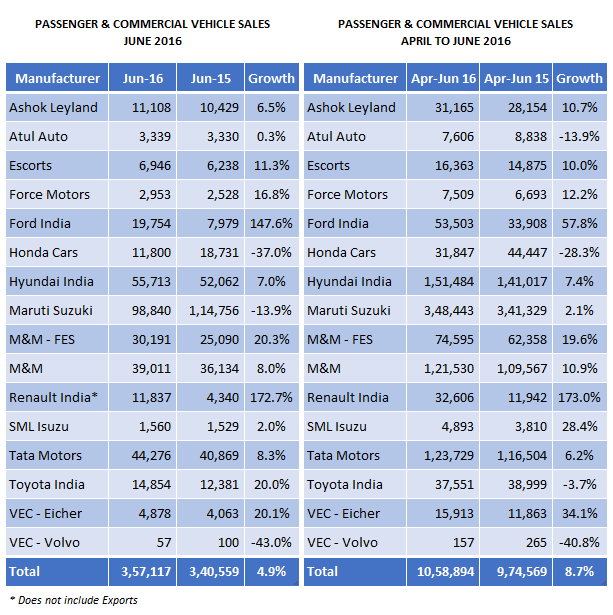 Continuing its good run on the back of increased demand and the upcoming implementation of Bharat IV norms, Ashok Leyland continued to clean out its non-core businesses.

The company has been witnessing growth in all the geographic regions in the country and has launched the Next gen school bus Sunshine. It is designed to protect the driver and co-driver with unique feature called frontal crash protection and prevents wheel locking during adverse conditions.  It gives a great mileage and reduces the maintenance costs (more here).

The Hinduja Group Co-chairman Gopichand P Hinduja said that his company Ashok Leyland will not have any impact of the Brexit as it currently does not export to Europe. Ashok Leyland has already divested its plant in Czech Republic and its exports are mainly to SAARC, African and Latin American countries (more here).

Force Motors opened its new facility for production/ manufacture of engines and axles . The facility is established at Village Nanekarwadi, Chakan, Taluka Khed, District Pune. This new plant will exclusively to meet the need of Mercedes Benz in India.

Made with an investment of Rs 100 crore, this plant is a part of the Rs 700 crore investment pledged by Force Motors over the next two years, across its value chain for multiple products, business verticals. The facility has a current annual capacity of 20,000 engines and 20,000 front and rear axles.

Our new model BR-V has received good acceptance in the market with over 11,000 cumulative bookings. We also recently achieved cumulative sales milestone of 200,000 units for Honda Amaze.”

Commenting on the June sales Mr. Rakesh Srivastava, Sr. Vice President Sales and Marketing, Hyundai Motor India Ltd. said, “Hyundai volumes grew by 9.7% with sales of 39,806 units with strong pull performance of volume models the Grand i10, Elite i20 & Creta and on the build-up of positive environment with good beginning of monsoons, the announcement of 7th Pay commission for Central Government Employees.”

You can catch the in detail analysis of Maruti Sales here: Maruti Suzuki clocks in 2.1% sales growth – Subros fire and plant maintenance to blame

India’s largest automobile company reported an 8% growth in sales for the month of June which was closely matched by the quarterly figures as well. Tata Motors is also experiencing a 100% sales growth in the hatchback segment in India on the back of the Tiago launch.

Due to the overwhelming demand the waiting period for Tiago has gone up to 6-8 months which has caused the company to double shifts at its plants in order to meet the increasing demand for the hatchback.

Commenting on the monthly sales, Mr. N. Raja, Director & Sr. Vice President, Sales & Marketing, Toyota Kirloskar Motor said “We launched the Innova Crysta last month and have received an overwhelming response from our customers. We would like to thank our customer for their trust in Toyota. The Innova Crysta has a waiting period of 2 to 3 months and we would request our customers to be patient with us so that we can bring the best products to them.

We respect the honourable court’s judgment regarding cleaning the bad air quality around us. We would fully support the authorities for creating a better environment for our future generations. We are confident that honourable court will consider our submissions during the next hearing in July and hope the matter is suitably resolved at the earliest.”

To reduce the current waiting period for the newly launched Crysta, the company has started ramping up its production. Of the 30,000 booking
s, 50% has been for the automatic transmission for which the company has asked its vendor to enhance supplies.

The company is targeting the same growth levels as the previous year as it has already lost out the market due to the diesel ban.

With an aim to reduce waiting period, Japanese auto major Toyota is ramping up production of it’s newly launched multi-purpose vehicle Innova Crysta in India to about 7,800 units a month to meet strong demand.

Exports took a major hit with international sales down almost 50% for the quarter and month ending June, 2016.

The company hopes that the expectations of good monsoon coupled with higher MSPs will drive sentiment thus positively impacting tractor demand. With both its Domestic Sales and Exports growth were in the double digit category for the month of June, the quarter ending numbers for Exports were on the negative end.

This post has been updated to include the sales numbers of Force Motors.