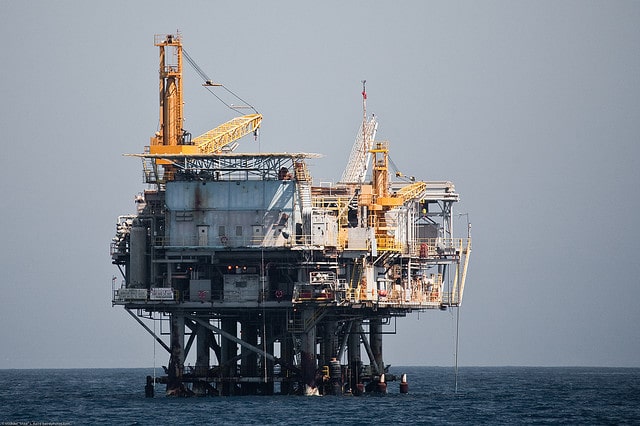 India with the world’s second largest population has been seeing a steady increase in oil demand. The current consumption rate for India is 4.2 million barrels per day (mbpd). India currently is the third largest oil consumer after US (19.39 mbpd) and China (11.96 mbpd), followed closely by Japan (4.15 mbpd).

Diesel is 40% of all Consumption Though petrol accounts for only 12% of the total India’s oil consumption, but it has the fastest growth in consumption in petroleum products at 15.26% (3 month moving average). Diesel and LPG have the consumption growth at 11.28% and 11.39%.

The government has been pushing users to  give up their LPG subsidy, and the age old “chulla” based cooking system is increasingly replaced by LPG in rural areas. In the 2016 budget, the government has even allocated 2000 cr. to getting more rural households LPG access. 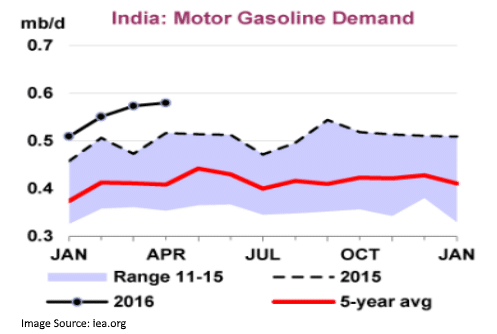 Petrol usage has significantly increased from start of FY15, The increase can be attributed to lowering petrol prices and significant rise in sales of two wheelers. Petrol car sales have also seen a tremendous rise mainly due to the converging petrol and diesel prices and as a matter of fact, petrol cars are lot cheaper compared to diesel ones. 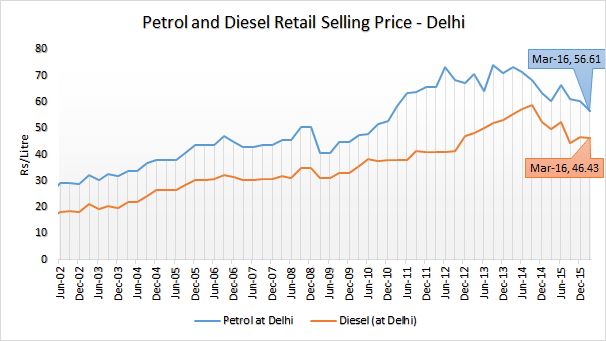 Diesel prices in India are no longer regulated and the prices, which were earlier subsidized for diesel compared to petrol, are no longer substantially lower than petrol.

According to the Society of Indian Automobile Manufacturers, car sales increased by 5.6%  in FY16, to 2.7 million units. In comparison, 25 million cars were sold in China during the same period, while 4.9 million were sold in Japan. As you can see, India’s just getting started.

The motorization rate in India as of 2014 is 22 cars per 1000 persons, where as for China and Japan it is 102 and 607 respectively. This indicates the immense potential India has in terms of car usage growth, and thus, oil demand.

Additionally, demand comes from diesel generators (which power a number of homes, apartments and commercial buildings). But here, as wholesale power generation increases, distribution of grid power could reduce diesel demand over time. The big oil demand will still be from vehicles.

India’s growing oil demand is seen as a substitute for the slowing demand in developed economies by the oil producers. Crude oil prices have recovered from $30/barrel to $50/barrel. According to a report by International Energy Agency, by 2040, India will add 6.0 mbpd to the global demand, while China – only 4.9 mbpd, while driving the global oil supply and demand gap. Oil is India’s largest import and the concern is that this demand will push up the trade deficit.

Oil demand will continue to increase, and reflects economic activity; but at some point, we’ll need to either find oil locally, or push to aggressively adopt electric cars in order to reduce import demand.