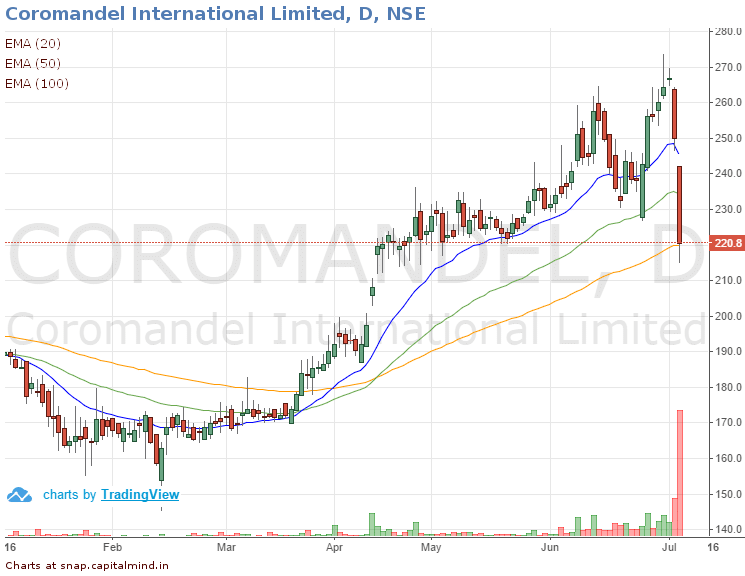 Fertilizers stocks which were riding high on good monsoons have suddenly hit a wall. Non urea fertilizer rates have been slashed by the government due to fall in global prices.

Diammonium Phosphate (DAP) and Muriate of Potash (MOP) will be cheaper by Rs 2500/ton and Rs 5000/ton respectively. Other complex fertilizers have been reduced by Rs 1000/ton. The Government in a statement have claimed to save farmers money to the tune of Rs 4500 Crs.

This move was initiated to reduce the farmers over dependence on Urea (which is subsidized). The initiative was taken after discussion held between government and the state run fertilizer companies. State run companies like National Fertilizers Limited (NFL) and Rashtriya Chemicals & Fertilizers (RCF) have readily agreed to cut down the non urea price with immediate effect. This translates to a reduction of Rs 150 on a packet (50 kg) of DAP, Rs 250 on a packet of MOP and other complex fertilizers by Rs 100 on a packet. The reduced price of MOP and DAP will be Rs 11000/ton and Rs 22000/ton respectively.

Urea which costs Rs 5360/ton is still a lot cheaper with respect to MOP and DAP, because of which urea has the major market share in terms of sale of fertilizers
. The objective of reducing the usage of urea may not be completely achieved due to high price differences between urea and other fertilizers. 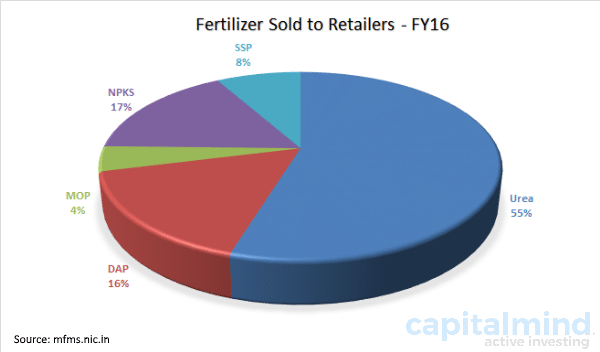 Government has been mooting policies to neem coat urea and reduce the burden on exchequer. Major objective behind these policies is to discourage farmers from excess utilization of urea and also to prevent commercial industries in taking the advantage of the subsidy given to farmers. India imports 25% of its total urea consumed and has allocated a subsidy of Rs 70000 Cr in FY17.

Coromandel was the major one to take the blow which has the second largest market share of NPK fertilizers (Nitrogen Phosphorous Potassium). Coromandel saw its share price plunge by 16% in two consecutive sessions.  The other stock which were impacted are Zuari Agro chemicals (down by 4.44% from its previous close), GSFC (down by 2.38%). Most of the private fertilizer company shares plunged in the range of 2-5%, where as state run companies shares were well insulated and plunged by 1-3%.

Overall, DAP and MOP are already being sold at discounted prices than its MRP due to cheaper availability of urea. So a rate slash of Rs 2500 transpires to Rs 1500 during actual sales. As of now the impact is limited, due to lower sales of DAP and MOP compared to market share of urea. Volume sales due to good monsoon might overshadow the decrease in profit margin of the DAP and MOP fertilizer sales.

Disclosure:  Capital Mind has recommended some of the above stocks in its portfolios.