So inflation is falling, they say. It’s claiming one victim, for sure. And that is in growth in deposits and credit.

Credit growth – that is, growth in bank loans – has fallen below 10%, and is near the lowest we have seen in 22 years. 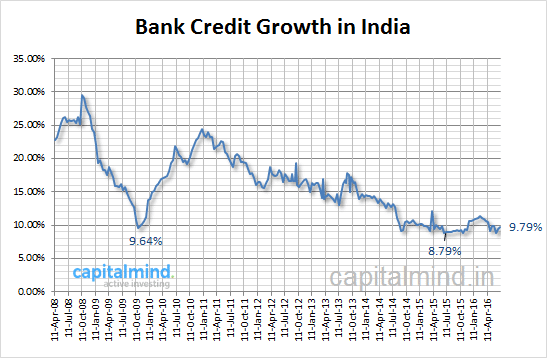 And here’s what it looks like for the last 22 years: 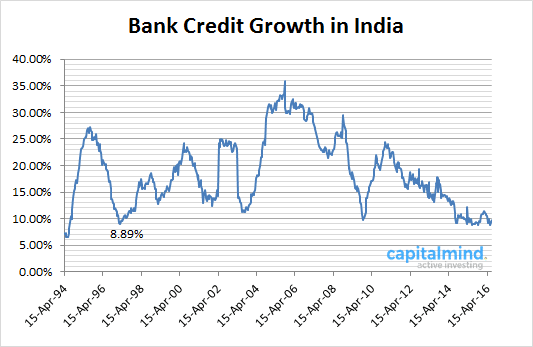 Deposits Too Are Falling

There’s not that much enthusiasm to deposit money in banks either, it seems. At 9.5% this is the lowest growth in deposits since, well, since forever. 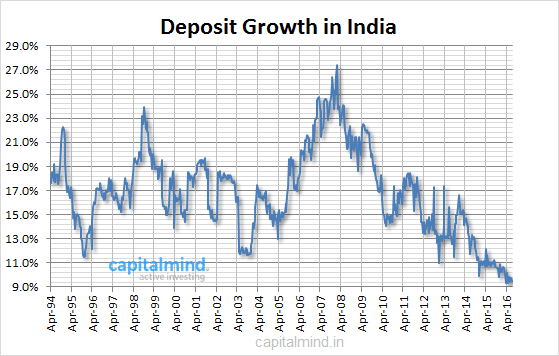 What’s the deal? Why would you think people will put money into bank deposits when you are offering crappy returns like 7% for one year deposits? Lending rates though continue to be at 9%+ which means banks are having a field day with their spreads.

Banking has become a cartel, and have been able to borrow at much cheaper rates from the RBI directly. RBI has become the lender of first resort, when it should really be the lender of last resort, because banks are simply not trying to borrow from each other. The system is broken. They aren’t cutting lending rates. They are choosing to buying bonds of larger corporates even if those rates are lower than their own lending rates. Banks don’t care about deposits – they are flush with cash that they don’t want to lend.

When banks don’t want to lend at lower rates, even if their borrowing rates have crashed, it means just one thing: they’re scared of defaults.

RBI needs to break this. RBI doesn’t want to, really, because doing so would mean hurting some banks and those banks are close to death. But new banks should be allowed to come and break this situation – unfortunately, the new ones seem to have just joined the gang.

The winners will be the non-banking companies like Bajaj Finance, Capital First and the Microlenders. And their share prices definitely reflect it.

Eventually, this slowdown in credit growth will show in bank growth numbers. Of course, certain banks have put (Last Year + 20%) into their excel sheets and invented their profit numbers for the next decade. That formula may no longer work – and we know it used to be 30% earlier. Banks may just not be the leader of the next move for India.