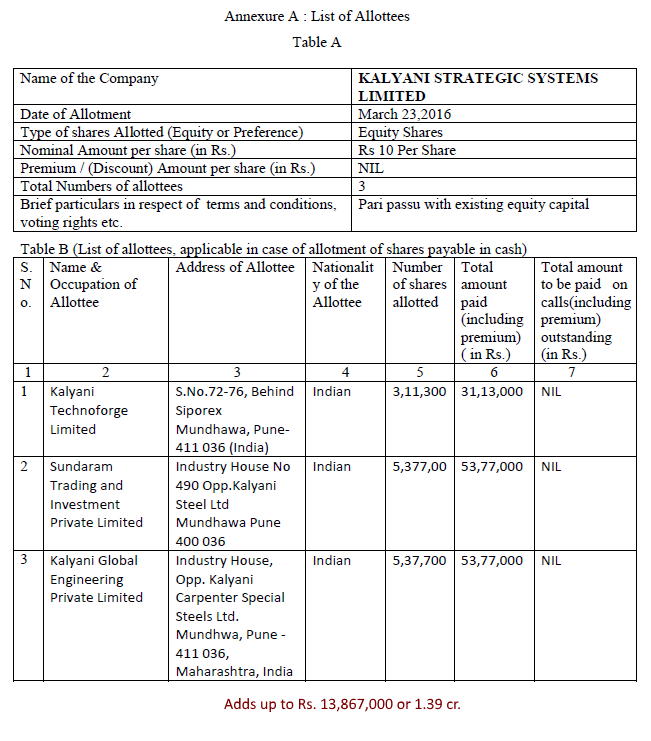 After Bharat Forge was caught having reduced its ownership in its key defence subsidiary, Kalyani Strategic Systems Limited (KSSL),  from 100% to 51%, the question is: how did the stake reduce?

We’ve found the answer for you. Wading through MCA documents, we found that:

Here are the three promoter group companies that bought into KSSL:

This is pretty simple to see – the promoters of Bharat Forge have been issued fresh shares of KSSL.

Why is this a problem?

The issue is: the shares have been issued at par, i.e. Rs. 10 per share. Why are promoter companies getting to buy shares at Rs. 10 per share, when Bharat Forge has done all the hard work of setting up Joint Ventures etc. through KSSL?

KSSL is their defence arm, and was owned 100% by Bharat Forge. It never was in the need of money – and if it needed Rs. 1.38 crores, this is so small an amount that Bharat Forge could sneeze and that much would be magically available. No, this is rotten because the amount was tiny and that the shares were sold at par.

Remember, the shares were issued to promoter companies in March 2016.

KSSL had a joint venture with SAAB in Feb 2016. Was that worth nothing? Even after that, no premium was paid by promoters.

In May 2016, the conf call transcript of Bharat Forge even says that they fielded a gun program (in response to a question about artillery) in KSSL, and they were looking to bag orders.

The fear is that promoters will try to take part of what should entirely be the property of Bharat Forge shareholders. In such instances, one does not get the confidence that the promoters will allow profits to continue to flow through the listed company. This should be addressed by Bharat Forge immediately, and in the longer term, SEBI should increase disclosure norms when subsidiaries issue shares and dilute parents.