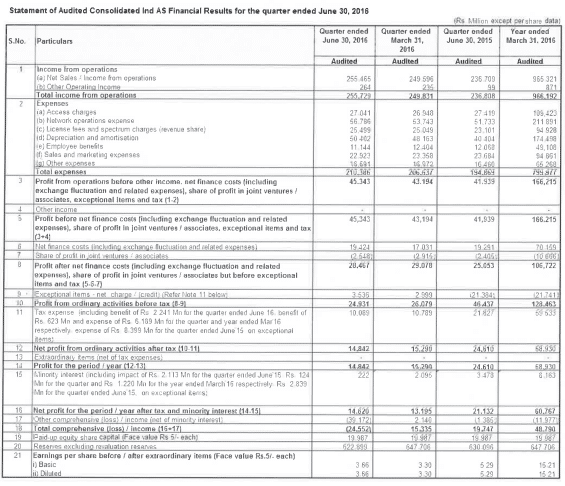 India’s largest telecom service provider by subscriber base, Bharti Airtel reported a 30.83% drop in Net Profits from Rs. 2,113 crore to Rs. 1,462 crore. Much of this is due to an exceptional income that had to be included in last year’s income due to hedging costs being added.
If you ignore that, the profits before exceptional items was up 13.6% from the previous year. EBITDA growth has been at an impressive 16%, but do recall that in the telecom sector we have a lot of variables that go into interest, depreciation and amortization, so we should be careful of a higher weightage to this metric.

The company registered a timid growth in Net Income from operations, which grew about 8% from last year. All the segments reported a better number than the same period of the previous year totaling at Rs. 25,546 crore against Rs. 23,670 crore the last time.
Profits before tax and finance costs from Airtel Africa unit grew more than 100% from Rs. 76.1 crore to Rs. 197.5 crore. The Airtel Digital TV services witnessed similar growth from Rs. 41.5 crore to Rs. 121.9 crore – almost a three fold rise.

Other notable points were:

Disclosure: Analyst or Family do not hold the stock