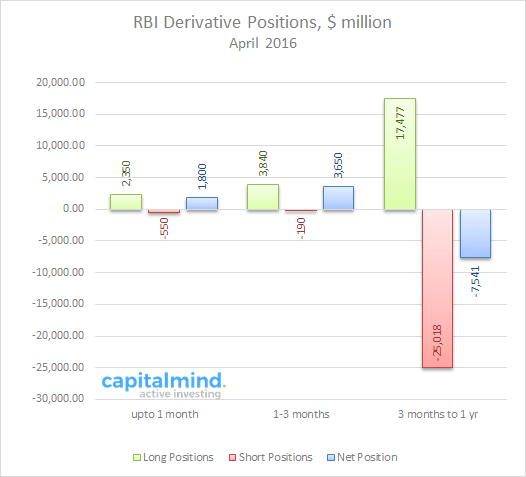 The RBI has had an interesting statement made on liquidity. We know at Capital Mind that the RBI did some crazy things in 2013 with liquidity – they had taken on massive FCNR deposits for three years, giving banks a 3.5% hedge for the currency. Basically it meant that Indian banks offered risk free deposits to NRIs at 5.5%, taken the hedge at 3.5% and effectively got in money at 9%, which was reasonable at the time.

But things seem to have changed now that the banks have to return the money. Here’s the RBI statement:

On liquidity, there have been two concerns. First on the maturing of FCNR(B) deposits, our sense is that the leveraged portions of those deposits will not be renewed. Therefore, there could possibly be outflows of the order of $ 20 billion. The RBI has covered those requirements in the forward markets, and will take some advance deliveries in the lead up to the maturation of the deposits. Of course, some counterparties are apprehensive that they will not be able to deliver easily on the dollars we are owed, and hence there may be some dollar shortage in the market. This is something that we will monitor. We may supply dollars in case of extreme volatility, but no one should take this for granted. We are, however, committed to supply short term rupee liquidity to the extent needed, to support our monetary stance.

What’s it warning? That there will be some mad situations in the USDINR market. The prices will go crazy, with RBI participating at extremes. The direction, between now and November (when the FCNR pieces expire), will be a downmove and then a spike when RBI comes, then a downmove again, and up-spike and so on. Fun!

Here’s the RBI’s derivative positions as of April 2016. So about $1.8 billion matured in May. That already saw some volatility in the USDINR.

There’s $3.6 billion maturing in June-August. And then, there’s $17 billion maturing after August, and we can assume that the $25 billion will be paid out around November. Oh, this is going to see some mad action, and it’s probably starting soon.

In Macronomics (Capital Mind Premium) we will do a more detailed set of posts on how this evolves. (Do subscribe – we have over 400 past posts on Macro, Options and Strategies).