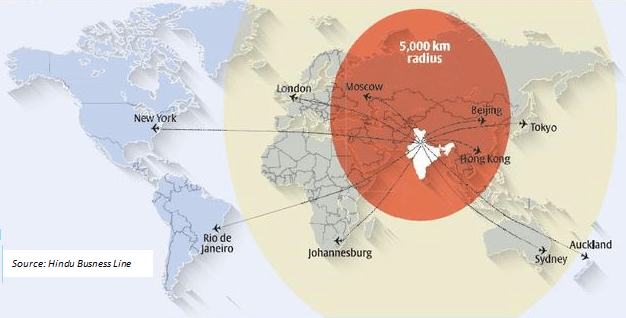 There’s a new aviation policy that the cabinet has cleared.

5/20 Requirement: In October 2004, the Union Cabinet stipulated that for Indian carriers to fly abroad, they must fly on domestic routes for 5 years and have a fleet of 20 aircraft. This has been replaced with a scheme providing a level playing field i.e. all airlines can now commence international operations provided that they deploy 20 aircraft or 20% of total capacity (in term of average number of seats on all departures put together), whichever is higher for domestic operations.

This is positive for companies like Vistara and Air Asia. They are new so they wouldn’t make the 5 year grade – but they still need at least 21 aircraft before they can fly abroad. Flying international has much more margin than flying domestic, which is why air carriers want a mix of both.

Bilateral Traffic Rights:  Government of India will enter into ‘Open Sky’ agreement on a reciprocal basis with SAARC countries (Afghanistan, Bangladesh, Bhutan, India, Maldives, Nepal, Pakistan, and Sri Lanka) and countries located beyond 5000 km from Delhi (a bonanza for European carriers such as Air France, KLM, Lufthansa, Swiss, British Airways and Virgin Atlantic and also open up the market for airlines from Australia, Africa and South America)

This means if the other country has an open sky policy, we will too. That also means air carriers of that nation can get as many landing slots as they want, and we will do so too. Currently, it’s a bilaterally negotiated deal – two governments need to sit down and figure out how many flights of either country can land where.

Open Sky effectively means that if India decides to follow an open sky with the UK, India and the UK will decide on how many cities each country will allow its airlines to operate to after which the designated airlines will be allowed to operate as many flights as they like.

Technically this could mean we’ll do open skies with America (which has an open sky policy) and with the Netherlands, and other such countries in Europe (which are more than 5000 km. from Delhi)

What if a country is within 5000 km radius from Delhi? If, in the bilateral agreement with the country, the Indian carriers have not utilised 80% of their capacity entitlements but foreign carriers /countries have utilised their bilateral rights, the foreign carrier will be given more slots. This means that if they want more slots but we haven’t used our capacity with their country, then we should give them more slots. Whenever the Indian carriers have utilised 80% their capacity entitlements, the same will be renegotiated.

Regional Connectivity Scheme effective from the 1-Jul-16, for a one-hour flight the airfare will be targeted at Rs. 2,500/- per passenger for a distance of 500kms to 600kms on certain routes.

Extra charges! A small levy per departure will be applied on all Category I domestic routes to fund the Viability Gap Funding (VGF) through Regional Connectivity fund. Meaning, if you’re flying from the metros, you’ll pay a little more.

Airport PPP/AAI – this would be to encourage development of airports by AAI, State Governments, the private sector or in PPP mode. AAI will be compensated in case a new Greenfield airport is approved in future within a 150 km radius of an existing unsaturated operational AAI airport.

Ground Handling: There’s no competition in ground handling crews – you have to build your own, currently, or use the incumbent player (AI). This will change – there will be other players that carriers can contract, apart from the AI crew.

This policy doesn’t do anything special for aviation in India. The 0/20 rule will take time for Air Vistara or Air Asia to benefit (they need to get to 21 aircraft) and will not benefit the likes of Indigo or Jet.

The open sky policy will have to be first negotiated with each country but it is a positive development; however, the first to take advantage will be the likes of Lufthansa or KLM-Northwest or such. Our carriers will take time to build their capacities to the level that they can fully use their landing rights abroad.

Finally, the extra fee per departure (to pay for VGF) is another charge that will hurt passengers. We don’t know how much that is but that’s an additional dampener.

Overall, a policy that is largely incremental in nature and will require much more action to be a big differentiator.