The Index of Industrial Production (IIP) actually contracted in April, being lower by 0.8% than April of 2015. This is a serious move away from the recent GDP figure where everything grew 7%+ in real terms, apparently. IIP measures “real” growth – the growth in production rather than in the prices, so it’s basically growth that isn’t only inflation.

The problem isn’t that it’s negative now. But that after an interesting few months in 2015 – when it was rising consistently – it’s gone back into this horrible situation of just staying flat or falling.

The sectoral changes are illuminating. While Mining is in the stages of recovery, and electricity growth is incredible (14%+ on the back of much more power production), most of the index is dictated by “Manufacturing” – which has contracted 3.1% from last year. 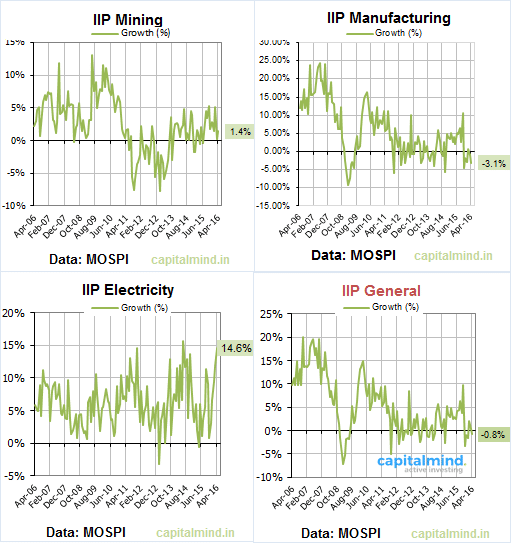 Oh the Use Based IIP shows a major negative move in Capital Goods (explained by the drop in Elect Machinery) and in FMCG (Consumer Non Durables). April was really hot and rural spending would have been bad. This has very little impact on markets, because no one really cares about IIP. In fact, markets either are over bullish or over bearish most of the time, and IIP will be used maybe a year later to say that maybe India was slowing. Let’s hope the monsoon pushes up production – because right now, the situation sucks.