Today we bring you the Indian Automobile Sales Report for the month of May, 2016. While this post covers the Two Wheelers alone, you can catch the Passenger Vehicles Report here.

The mass two-wheeler market continues to be dominated by the four big companies— Hero MotoCorp, Honda Motorcycle, Bajaj and TVS who together account for more than 80% of the market. Royal Enfield continues to out perform the Industry with Bajaj Auto continuing to lead the field from the back. 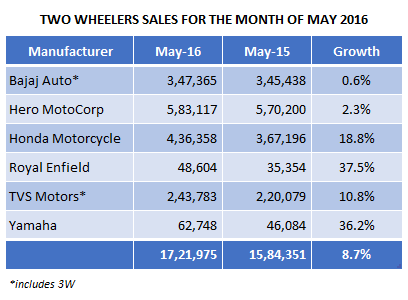 Jump to the company that interests you using the list below:

The ecstatic Bajaj team has given a sales guidance of 4.6 million units (two and three wheelers combined) in FY17. The company expects to compensate the 10% drop in export volume by targeting sales of 3 million units in the Domestic market.

The company plans to invest Rs.575 crore in FY17 with a major chunk of it being used for launching products. The company is planning to launch an upgrade for the Platina (entry-level model) and a totally new Pulsar at the top-end in the next quarter.

The world’s cheapest small car Bajaj Qute will soon be exported to Russia through the distribution company East West Motors in the autumn of 2016. The vehicle has been classified as a quadricycle which will be allowed to ply on Russian public roads. Russia’s domestic automobile market is going through hard times, with sales continuing to drop for the fourth consecutive year.

This 217cc 4 wheel Quadricycle has already hit other foreign markets such as Madagascar, Liberia, Peru, East Africa, Sudan and Somalia totalling over 680 units as of May, 2016.

Its exports growth have mainly been driven by the demand in Kenya, Nigeria, Sri Lanka and Colombia as exports to these countries have crossed 10 lakh units in the months of April and May.(Return to List)

The world’s largest two-wheeler manufacturer (in terms of production capacity) has decided to introduce online buying of the company’s products through its own platform. This comes at a time when the company’s 18-month-old online tie-up with Snapdeal has garnered over half a million bookings. The company will continue its tie up with Snapdeal as well as sell through its own platform. The company is also in talks with other leading e-commerce players as well.

The company has also decided to expand its production base in Southern India as it looks to setup an auto component manufacturing facility – a 20-acre space at Vallam Vadagai SIPCOT Industrial park in Tamil Nadu. The intended investment is of around Rs. 75 crore.

It has also recently appointed Malo Le Masson as the head of global product planning. He will spearhead Hero’s entire product planning for its global markets including the domestic market in India. He joins Hero MotoCorp from Infiniti Motor Co., Hong Kong, where he was the global head of product long-term strategy since 2013 prior to which he was associated with Nissan Motor Co.

Market demand was expectedly subdued in May, due to the heavy retail offtake that happened in April on account of the marriage season and regional festivities in different parts of the country during that month.

However, a good monsoon after two consecutive years of sub-normal rains could lead to a change in sentiments in the rural markets, which may lead to a positive turn-around in the industry in the second half of this fiscal.

Note: The Company has not provided the breakup of its Domestic and Export numbers. (Return to List)

Honda is celebrating a significant milestone for its latest product – the Navi as the product has achieved its first major with 10,000 units dispatched to buyers. The total bookings for the bike have now exceeded 15,000. Honda expects Navi numbers to dramatically increase as it begins to offer the product pan-India. 70% of buyers so far are 18 to 23 years old, with a quarter of the sales being accounted for by women buyers.

“Navi still hasn’t been launched across India and its only limited to 10 cities as of now. From June we have started couple of more cities so only 10 towns and 10,000 dispatches – so it’s a great beginning for creation of a new segment and the acceptance and overwhelming response we are getting from urban youth – who are supposed to be the trendsetters. Also it sort of gives us a reassurance that we have already moved on to the next step of creating entirely new segment of two-wheeler in the country.” says Y S Guleria, Senior Vice President – Sales & Marketing, HMSI.

The company has also signed a pact with IndusInd Bank to offer retail finance to customers in order to boost its domestic growth. Under this IndusInd Bank offering vehicle loans at a rate of interest of 18% on all Honda two-wheeler models through its network of over 1,000 branches spread across India.

Its exports growth have mainly been driven by the demand in Sri Lanka, Colombia, and Mexico as exports to these countries have crossed 23,000 units in the months of April and May. (Return to List)

Royal Enfield continues to attract touring fans with its heavy all terrain bikes. With huge cult under its belt, RE now commands a waiting period of 3 to 4 months for the Himalayan and the Classic 350 (Classic 350 continues to be the single largest selling model) with the overall backlog of the models still at 3 months. The company does not feel a need to foray into electric bikes as it will not work in India.

RE is investing Rs 600 crore towards product development, setting up of the two technical centres, in Leicestershire, UK and Chennai, India, and enhancing manufacturing capacity along with market development activities across geographies.

Its exports growth have mainly been driven by the demand in Thailand, Nepal, Germany, France and Australia as exports to these countries have crossed 1,000 units in the months of April and May. (Return to List)

The company which counts itself as one of the largest two-wheeler companies and a leading three wheeler manufacturer has been busy with expanding its footprint and product base across India.

Ove the past 30-35 days, the company has launched its Four Stroke TVS XL 100 across Karnataka, Rajasthan, Himachal Pradesh, Chandigarh, Punjab, New Delhi and Haryana. It has also launched TVS Scooty Zest 110 “Himalayan Highs” edition and the TVS Jupiter MillionR special edition equipped with 10 additional features, a tribute to its 10 lakh happy customers. This is being done in the hopes of achieving a higher growth trajectory from the second half of this fiscal year.

TVS Motor Company feels the restricted availability of forex is affecting Indian exports to Africa including that of the company. (Return to List)

The company continues to maintain an upward trend in sales on the back of its superb product line-up with the addition of the newly-launched commuter bike Saluto RX and scooter Cygnus Ray-ZR.

Scooters currently make up 51% of Yamaha’s sales in India (including Nepal), while motorcycle sales is at 49%. The company has launched Cygnus Ray-ZR, its fourth scooter in the country to broaden its customer base and grab a bigger slice of the growing scooter pie.

The company inaugurated a new unit in Kanchipuram near Chennai in September last year with a planned investment of Rs.1,500 crore in addition to its two manufacturing facilities at Faridabad and Surajpur thereby bringing the total capacity of 2.5 million units by 2018.

Note: The Company has not provided the breakup of its Domestic and Export numbers and sales to Nepal have been included in the numbers above.

Commenting on the company’s sustained growth, Mr. Roy Kurian, Vice President – Sales & Marketing, Yamaha Motor India Sales Pvt. Ltd. said, “Yamaha’s consistent sales of FZ series bikes are ensuring reasonable presence in the deluxe segment. Now with the launch of the Saluto RX*, Yamaha has managed to make inroads in the commuter segment by bringing together styling and comfortable riding with great cost benefits. With the Fascino* riding a high wave in the market, the Cygnus Ray-ZR* will strengthen the overall volume of scooter sales for Yamaha. Yamaha is very optimistic about its customer centric activities to propel sales growth in the coming months.” (Return to List)

M&M has not shared it 2 wheeler sales data. The company is currently restructuring its business against the backdrop of tepid sales volume growth for at least two consecutive years. Mahindra Two Wheelers currently sells the Centuro and Mojo motorcycles and the Gusto, Rodeo and Duro scooters.

Other unlisted auto companies in this space include Harley Davidson, Honda Bikes, Suzuki and Piaggio.

Nothing in this newsletter is f
inancial advice and should not be construed as such. Please do not take trading decisions based solely on the matter above; if you do, it is entirely at your own risk without any liability to Capital Mind. This is educational or informational matter only, and is provided as an opinion.