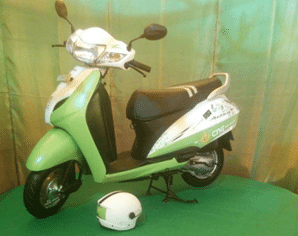 In a major step to curb rising air pollution in Indian cities, the centre has launched first of its kind Pilot Programme in the country to run two wheelers on Compressed Natural Gas (CNG). This initiative is being implemented by Indraprastha Gas Limited (IGL) and Pilot Programme involves 50 CNG retrofitted two wheelers. (click here for the Press Release)

The CNG kit for two wheelers comprises two CNG cylinders of 4.8 litre water capacity each, which can be filled with up to 1 kg of CNG in each cylinder. These CNG retrofitted two wheelers can drive up to 120kms in a single fill and are expected to be substantially economical as compared to a similar petrol run vehicle at the current level of prices, as per the kit manufacturer (Ituk Manufacturing India).

Minister of State for Petroleum and Natural Gas (I/C) Shri Dharmendra Pradhan said, “The Government is pro-actively striving to promote clean fuel in the country. Under the visionary leadership of Prime Minister Shri Narendra Modi, the Government is promoting the use of gas in the country, thereby providing a better lifestyle to the people and also fulfilling the COP-21 commitments to curb pollution.

The Gas share in the country’s fuel basket is just 7% compared to world average of around 24%. He said that 350 MW Badarpur Thermal power plant in the capital is making several times more pollution than all the vehicles of Delhi put together.”

Minister of State (I/C) for Environment, Forests & Climate Change Shri Prakash Javadekar said, “The Government is fully committed to control pollution in the country, and for this purpose, there will be a jump from Euro-IV type fuel to Euro-VI by 2020. The Environment Ministry will fully support the endeavours to promote clean fuel, including Gas. The launch of pilot phase of the project for CNG kit in two-wheelers show the urgency and intention of the government to fight pollution along with steps such as cess of Rs. 400 per tonne on coal, introduction of E-rickshaws and providing subsidy to electric/hybrid cars.” 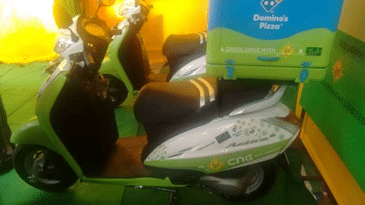