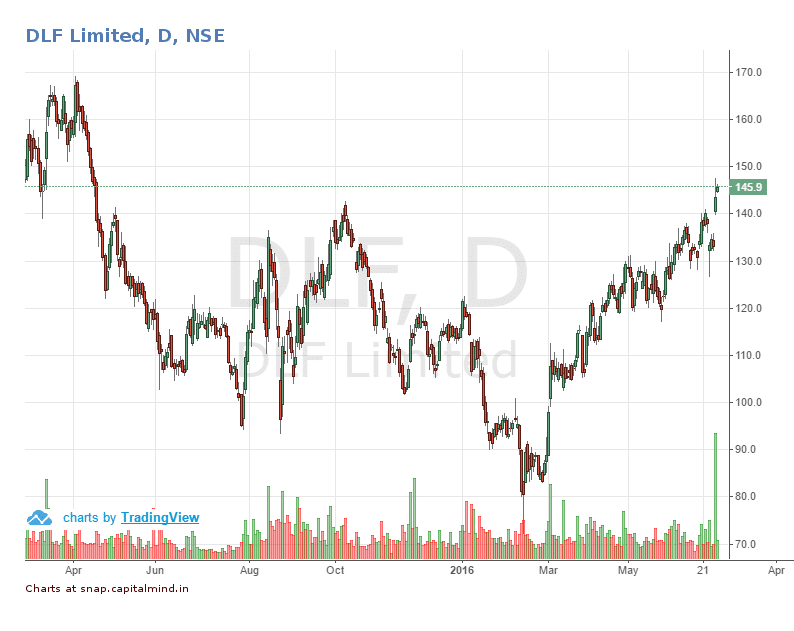 Economic Times carried an article yesterday which took DLF shares up nearly 8%, because, goodness the promoter was going to pump in 10,000 cr. into the company and get other people to buy also, and wipe out the debt!

The article though, seems to be a rumour, more than real news. The article says:

The Singh family plans to sell its 40% stake in DLF Cyber City Developers Ltd.(DCCDL) for Rs 12,000-13,000 crore and will use the money to retire the parent company’s debt. Separately, DLF will raise about Rs 3,000 crore from institutional investors to ensure that the stake of the promoters doesn’t breach the 75% threshold with the purchase of the preferential shares, said two people familiar with the development.

Emphasis is mine. This is important because it should trigger alarm bells.

Note the use of phrases. “Plan to” means nothing. If you want to sell, you sell. You don’t tell people you plan to sell. Rumour alert!

Second, they will sell for 12,000 to 13,000 crores, and then will use the money to retire the parent company’s debt. How? You can’t have a promoter pay a company’s loan. So the money will have to involve a preferential issue into DLF, and that money could be used to retire debt. The preferential issue to DLF will increase the shareholding of the promoters above 75% (they are at 75% now) so if they put in 12,000 cr. they have to get someone else, perhaps through a Qualified Institutional Placement, to put in 3,000 cr. to keep the shareholding at that level. They “will issue” means nothing – either you do a QIP, or you don’t – and there’s no note of a QIP (which needs shareholder approval) by the company.

Finally, the source is “two people”. No names. No comment from the company.

But It Could Be True!

Yeah, of course. It could be. But it’s important to differentiate rumour from actual reality. Once you know that:

This could happen of course. But it’s still a rumour.

DLF’s commercial development arm, called DCCDL, is owned 60% by DLF and 40% by the promoter family. The recent clarification says that if promoters sell their stake in DCCDL they are legally bound to invest the money back into DLF.

Will all the money come back into DLF? Answer: the word used is “substantial” part of the proceeds, net of taxes. This might mean a lot lesser money.

And, the decision to divest promoter stake in DCCDL was done on October 8, 2015. That was about 9 months back. There has apparently no change with regard to the sale of their stake (as Compulsorily Convertible Preference Shares, CCPS) and because of the announcement they haven’t even converted the CCPS to shares, which should have happened by April 2016.

While the chart runs away, note one thing carefully: stocks run up on news, but sometimes a rumour can be hugely misleading. In DLF’s case, it’s important for the promoters to both sell the stake and reinvest in the company, while raising a QIP at a good price, in order for the company to justify this price jump. It might be better to wait for confirmation.