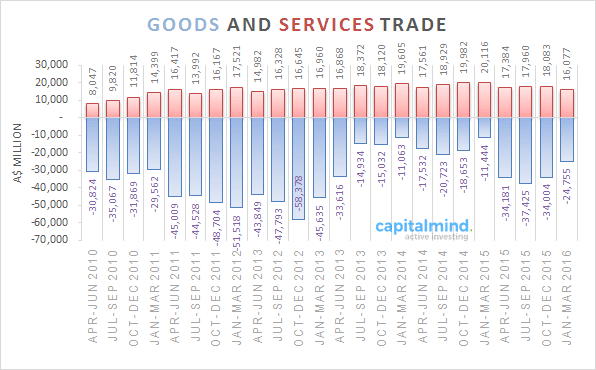 India’s Current Account Deficit was the lowest in a very long time, coming in just $318 million, or around 0.1% of GDP. 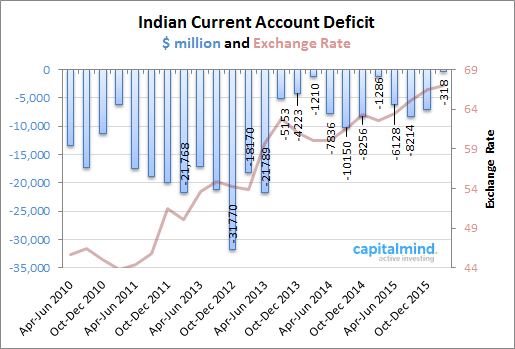 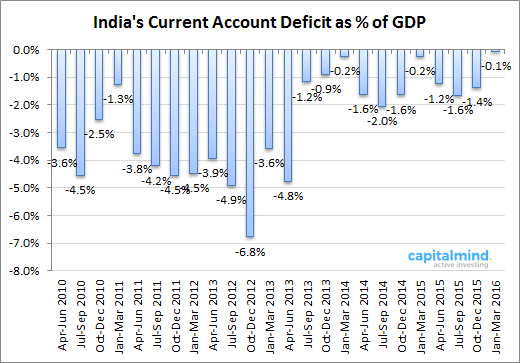 Read: What is the Current Account Deficit and the Balance of Payments?

But IT Exports are Slowing!

At the trade level we are seeing both Goods and Services fall in net terms. While we continue to have a $24 billion net import bill on merchandise, this is far lower than the recent quarters where we were seeing $35 billion and more.

And then, the services bit – typically computer software – has been offsetting the big merchandise trade deficit. But even there, we are seeing the lowest service export number in four years (since June 2012)!

Net of Gold: We are doing well!

We buy gold, and it’s part of the current account. This is considered as just another piece of merchandise. But we all know how Indians think of gold – as wealth, as capital. So it’s more a capital asset than a current one (think of a gold coin versus, say, a mobile phone).

So if we back out Gold from the current account, what’s the situation?

We’ve been positive for over six quarters by this measure – and this time, we would have a surplus of nearly $5 billion. 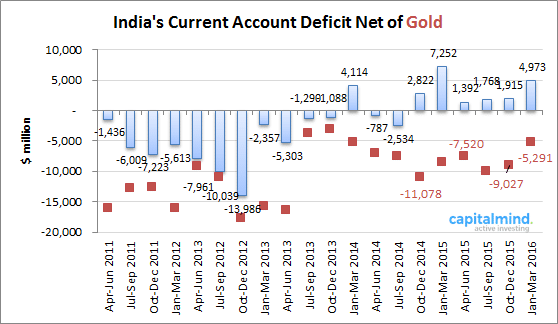 This is good news – if we were to somehow reduce the demand for gold we might be able to substantially cut the deficit in the current account.

The foreign portfolio flows have slowed a lot. While it may just be the the April to June quarter shows a recovery, we are seeing very little net inflows from foreign investors. 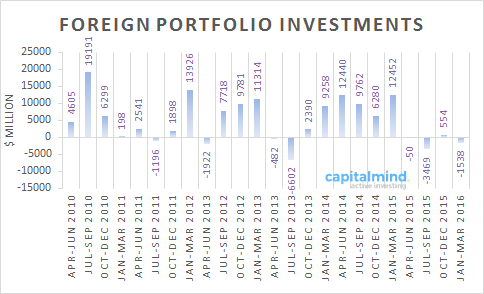 What used to be a big determinant for everything in the past – foreign investment into Indian equity markets – is now slowing and becoming less relevant. It’s likely that this is replaced by Indian domestic investments, but equally, it could be that the lack of effective interest is due to relatively low performance in the last year.

A low Current Account Deficit this time is largely due to subdued demand for gold, and a relatively lower demand within India for imports of foreign merchandise. The troubling pieces continue to be a falling service-export number, which indicates an IT sector slowdown. And also that foreign investors aren’t as keen to buy Indian stocks/bonds as they used to be.

However the big positive is the lower current account number. You will notice that this has come about when the rupee is about at Rs. 67 or so – it’s the weak rupee, relatively, that seems to have helped reduce our deficit (otherwise a low deficit number would have strengthened the rupee)

In the next few quarters, things will change significantly, as we return NRI deposits (big chunk in the December quarter). Crude prices are going up, which will expand our merchandise deficit further – and if IT exports don’t click, then we will see a widening trade deficit as well. The rupee should weaken, with these headwinds, even as we celebrate the lowest CAD in a long long time