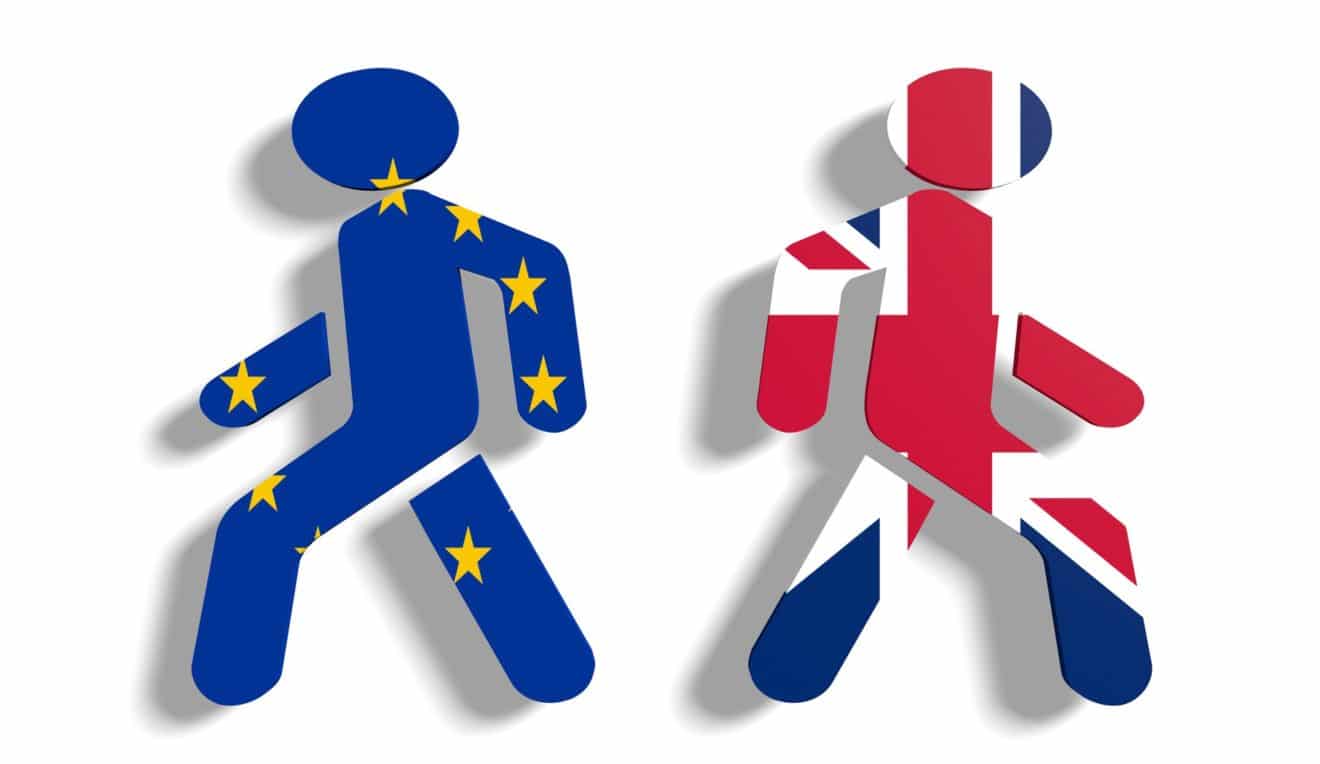 On 23 June, the UK will settle a question that’s been rumbling close to the surface of British politics for a generation: should the country remain within the European Union, or leave the organisation and go it alone.

Brexit is the term coined for Britain’s referendum to exit the European union. The referendum is due for voting on 23rd June 2016. Momentum is growing behind the EU exit campaign, which wants to end central control by Brussels and give Britain the freedom to manage its own affairs.
Prime Minister David Cameron announced the date after he secured a deal with other European leaders at a crunch summit in February. The Government decided to hold the vote before the start of the summer migration crisis, which could stir up more Eurosceptic feeling among the British public.
British, Irish and Commonwealth citizens (except citizens of Gibraltor) who live in the UK, along with Britons who have lived abroad for less than 15 years, will be able to vote. The registration for the voting has ended on 9th June 2016 at 11:59 Pm (BST). As on 7th June the count of registration stood at 525,000. Update: The count is far higher now at over 45 million. Thanks to watchful commenters here!

Brexit is about Britain’s exit from the EU.  This vote has been put in place by the idea of giving more powers to the people of Britain in decision making of their country, rather than being the implementer of the policies made in Brussels (headquarters of European Union). But its not as simple like coming out of Europe. Britain trade rules are bound by the European law, but post-Brexit Britain can negotiate the terms and conditions of the trade with different countries.The process is more complex and involves lot of interdependent variables, like which country trades more with Britain, which one exports more to it or buys its goods etc.
Britain has been more of a importer than exporter. With a big economy and low resources it is dependent on Europe, China and India for its imports. Europe being a free trade area has been providing the free access to markets for Britain until now.
But in case of a Brexit, Britain needs to look into other markets like India and China and other emerging economies for trade. But on the contrary it can do a Norway, by establishing bilateral trade agreements with European Nations even after coming out of European union.
The Brexit impact is not only limited to Britain, but also European countries. London has always acted as financial hub, which gives access to capital markets of the world to Europe. But with Brexit, European Union will end up having a limited access to capital markets. In all likelihood, access to this market will form a key part of trade negotiations.
There are as many pros as cons in Britain exiting the Europe. The Prime Minister however has been asking the people to vote against Brexit, citing Economic woes as an aftermath. It has been a difficult shot to take as the advantages and drawbacks weigh equally with the referendum. Yes, Britain will leave the trade-block, but is likely to be able to renegotiate treaties in the long time that Brexit will take to happen.
The vote just tells us that the British people want to exit the EU. It will then take two years or more to work through exit modalities, a time in which a lot of things can be brought back to normal, including trade relations.
The first direct impact will be, Britain saving on EU membership fee. Currently Britain pays £8.5bn (£12.9bn out of which £4.4bn is deducted as expenses ) as the membership fee, which would be 12.23% of their fiscal deficit for FY2016 of £69.5bn. This will not go to zero, but it will be substantially lower, and might lead to additional collection of duties as Britain imposes duties on certain goods as an importer. 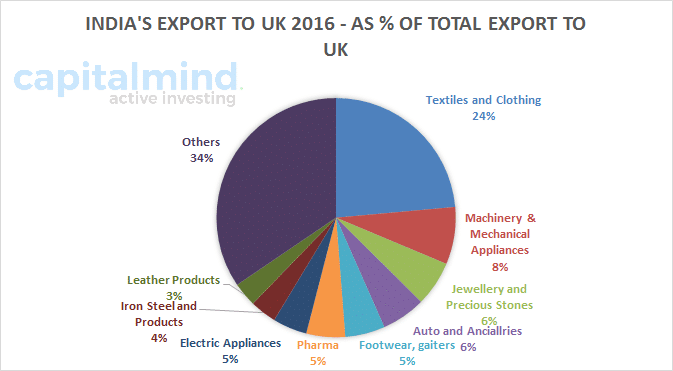 So on the event of Brexit, the pound rate might fall against the dollar and thus, the rupee. And the companies which have income from UK and Europe are going to be hit, at least for shorter term. Companies like Motherson Sumi which have their 85% of income coming from Europe are keeping their fingers crossed on the referendum.
Indian pharma industry which has more exposure towards Europe, will also be affected. 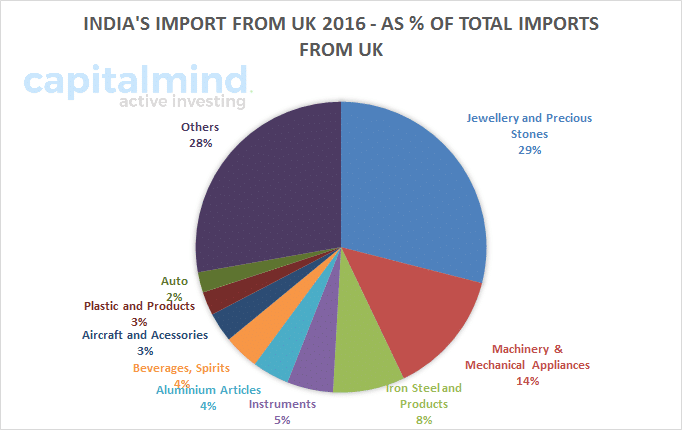 On the other hand the imports from UK will be getting cheaper on the event of Brexit, mainly rough uncut diamonds, spirits etc. Those Single Malts may finally be affordable!
Also read : Options: Is there a #Brexit play? Uncle Theta explores.

Indian Firms to look out for on the event of Brexit.

Markets would definitely see a temporary hit because of Brexit. Watch our video on “How to hedge your portfolio using Options during Brexit or any other global event?”
Other companies which have decent exposure to Brexit are HCl Technologies, Lupin, Navin Fluorine, Sun Pharma, Bombay Burmah trading Corp, TVS logistic services, Piramal enterprises etc.

Tracking the Possibility of a Brexit

There have been various reports and media campaigns trying to influence the voters , but how can we as an outsider derive where is the momentum gaining? To have better view on Brexit momentum, we can look at how pound is performing against the dollar and Euro. Currency of the country always is a strong indicator of confidence in the economy. If you see lately from June 7, the pound has been falling from 1.46 levels to current 1.41 levels till Jun 16.
Read how Brexit caused Pound to plunge and Yen to rise 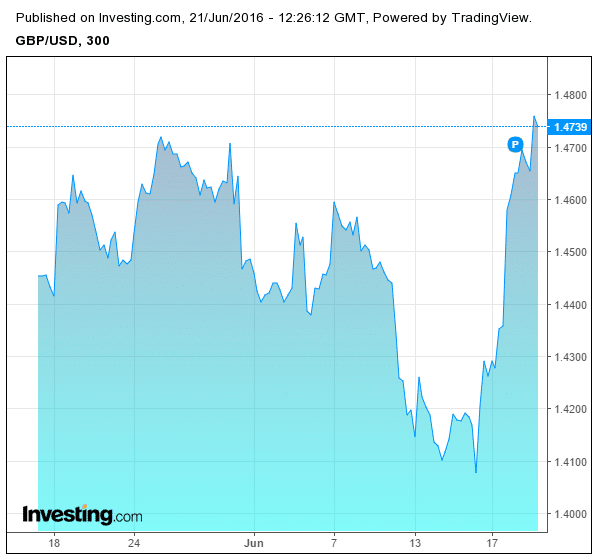 This fall shows the growing concern of the investors of Britain exiting Europe. But later from June 16 to Jun 21 the pound has gained from 1.41 levels to 1.47. Now as the date is near approaching, the investors/traders are seeing it unlikely to happen. Though this doesn’t necessarily provide any concrete conclusions, but can help in tracking the momentum of the Brexit campaign.
Betting sites like Ladbrokes have been predicting the Brexit possibility. 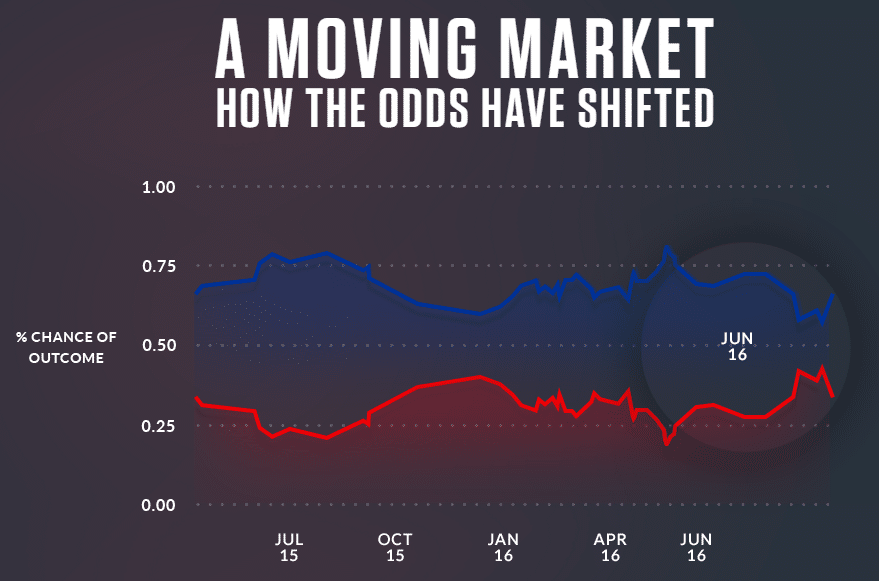 If we look at indirect impact on an event like Brexit, it could be a “flight to safety” – meaning, foreign investors exit Indian investments to rush back to the dollar. This is unlikely. So as such nothing can be said as of now, but Brexit has no limited implications but a cascading affect can be seen across the Global Markets on the happening of Brexit. It will take some time to settle the dust, but never the less we need to be prepared for it.