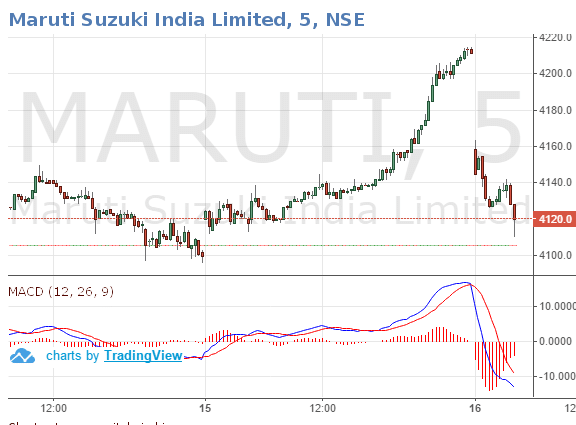 The Japanese Yen is rising. The USDJPY chart is showing a record near two year low of 104.25 – the lowest since 2014!

The US Fed held down rates at the same level yesterday (did not hike). But it added a cautious note and they still think two hikes could happen this year. And, then the Bank of Japan decided against further stimulus. It’s a strange thing because that economy has been stimulated to the moon and back and it’s just not working. The Nikkei is down 2.77%.

An export economy like Japan hurts when its currency rises, and it’s broken that long standing 105-106 barrier now, which could see the currency go to 100. And that’s scary for Japan.

But it’s also scary for Maruti – who pays royalty in Yen. (Not all of it, but most of it)

Maruti’s chart shows a massive move yesterday but fizzled out today after the JPY move. And it’s close to breaking it’s own recent low at 4100.

As much as we would like to say that central banks are managing to control the markets, there will come a time when they cannot, and will not. We don’t know when that will happen – because they have enormous firepower and can act late and bigger than you think – but at one point it will. Japan, like John Mauldin says, is a bug waiting for a windshield. Their debt is massive, their populating is aging, and still, they have negative yields on most of their bonds – which are trading at the lowest ever. This is just a disaster waiting to happen, but all you can do is take small positions because the central bank bazooka might be around the corner.

The market is now full of everything that the fundamentals don’t often consider – the currency rate, the flow of funds from abroad, the central bank actions and what not. It’s a different time today!

Disclosure: Own a ratio spread in Maruti that will benefit if Maruti doesn’t rise beyond 4300.