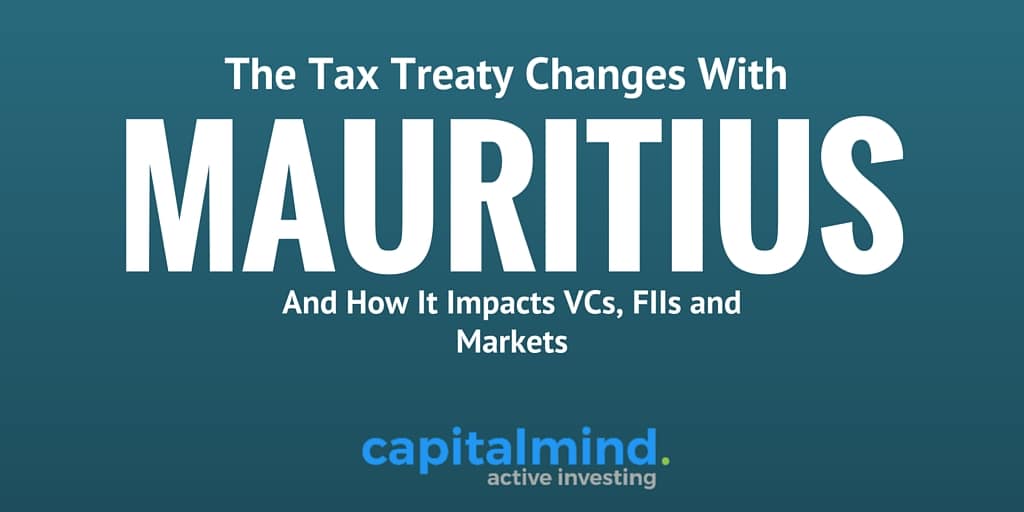 Mauritius based entities that Invest in India – from Private Equity investors, VC funds, and investment pass-through vehicles (which issue participatory notes) will start to see taxation apply to them from April 1, 2017. This is due to a treaty change between India and Mauritius.

Here’s the full text of the treaty change.

Currently, if you are a foreign investor, you can invest in Indian companies – both listed and unlisted. When you sell them, you would pay capital gains taxes in India (as many NRIs do) and some of those gains are withheld before you get the money.

But till now, there were Double Taxation Avoidance Agreements (DTAAs) which are treaties between India and certain countries, that allowed a certain type of gain – Capital Gain on the sale of shares or property – to be untaxed in India. This applied to entities coming from Mauritius, Cyprus and Singapore. So if you brought the money in “through” a Singapore, Mauritius and Cyprus entity, then the sale of shares would not be taxed at all, since none of these countries charged any capital gains taxes.

Leave Cyprus out of it for now. The government there tried to remove money from bank accounts and will suffer from investor fear for a while.

Mauritius was the easiest.

All you had to do to get zero tax on your investments – both listed and unlisted – was simply to set up a shell entity in Mauritius. The tax treaty didn’t differentiate between a company that was actually operating in Mauritius versus a company that was only set up there to get tax benefits. So for a few thousand dollars, you could get a Mauritius entity and invest through it into Indian stocks and shares, and never pay capital gains taxes anywhere.

Why not Singapore? Singapore had both “objective” and “subjective” restrictions on who got this treaty benefit – for one, the Singapore entity needs to spend Sing$ 200,000 a year in Singapore – an amount that would easily deter the tax shopper from creating such entities only for tax benefits. Subjective rules also exist which can disallow a company if the tax authority feels this entity was created only to get tax benefits.

Mauritius was thus the easiest entity to create your little tax avoidance intermediary. And scores of people used it. Almost all the big banks have a Mauritius intermediary that owns shares either for themselves or on behalf of customers, with the primary advantage being tax. (Who really wants to live in Mauritius otherwise? It’s not a bad country but it’s hardly the place to be for a really wealthy person)

Things have changed. Not all is bad, but it has some business consequences for the entities involved. Here’s what’s happened.

From April 1, 2017, any shares that are purchased, by Mauritius entities, will see capital gains taxes in India.

Meaning, if you already own those shares, you will not be taxed on their sale. (So shares bought before April 1, 2017 are exempt like they are now). This is where the process has been grandfathered.

Also, if you bought these shares after 2017, and sell them before April 1, 2019, you get taxed only HALF of the domestic tax rate. For two years, there’s some sort of a discount.

And There’s a Limitation Too

To get the lower tax benefit (between 2017 and 2019) you still have to qualify under the Limitation of Business (LOB)  principle – meaning:

If you don’t qualify, you don’t get the lower tax (for two years). After that, the LOB doesn’t matter – anyway you pay full tax.

So How Does It Affect The Market?

Well, it shouldn’t, but it usually does. Remember all past investments have been grandfathered and if sold, those shares pay no tax no matter when they are sold.

Mauritius was some kind of tax haven, and that status will go over time. But the major impact will not be felt by current investors who already have shares – they will be able to sell anytime and not have to pay tax. It’s their purchases after 2017 that will attract tax, and maybe they won’t buy anything after 2017 through Mauritius.

The hope in the market will be that post 2017, the market will crash so the ministers will move the starting date further down by a couple years. This is par for the course for India because if you torch a few vehicles and block a few roads, any reform can be reversed. But the tie-wearing Foreign Investors might choose to disrupt only what they can – the markets – which depend so much on foreign flows that a disruption is both easy and guaranteed if the foreign investors want it. However, this might not happen immediately.

What changes? FCCBs, for one.

If such bonds are converted to shares after April 1, 2017, then those shares will attract tax on sale! This is not desirable – and the entire point of routing investments through Mauritius was to avoid tax – so you can expect some of these shares to see conversion and sale action through the next few months.

Many VCs don’t buy shares in private unlisted companies in India. They buy preference shares, which are converted to “common” shares at a certain ratio, typically just before sale. Unfortunately, a conversion to common will entail capital gains taxes after April 1, 2017! So such investments too will have to be restructured, and in many such cases, there are serious restrictions on conversion or other complex clauses which will generate, at the very least, a lot of revenue for lawyers.

Big political statement. But black money’s biggest problem isn’t the tax. It’s the fact that the new treaty allows India to ask full details from Mauritius about the owners of the entities who invest through that country. Sharing of information will hurt black money, not the tax.

The impact is to entities that never expected to pay Indian taxes at all. Like a hedge fund that came in from Mauritius, and legally avoided tax. The money they have isn’t black. It was never even supposed to be taxed. The impact is on white money really.

A Segue: Why Are We A Different Country?

If you invest in US stocks, do you know that you don’t pay US taxes? Your capital gains are only taxed in India. That’s how much of the west operates – you invest in our country and your profits are not taxed here (if it’s an investment), it’s taxed in your home country.

Why should it be different when US investors buy Indian stocks? This should never have been the case.

Some of it will not – since long term capital gains is anyhow not taxed in India for listed companies (because of STT). But the majority of the rest of the inves
tible universe – unlisted companies, property etc. will see foreign investments taxed in India as well. This isn’t exactly a level playing field – people have to REALLY love India to invest in it. We’ll see how much affection they have based on their reactions.

Let’s be fair – the stock market has sold off for less reasons than this.

But also, remember that the impact to the market is going to be to:

Some of these elements will get cleared in the next few days. But you can imagine that the short term or algo trader from abroad, who has set up shop through Mauritius, is going to have to go through a blood transfusion. Okay, not quite, but it will seem like that.

These short term traders may also be structured to be managed from within India now.  And a change in their operations can disrupt some of the operations like market making and arbitrage trading.

Many other FCCB and convertible debenture mechanisms will have to be restructured fast. Those stocks – and there are a truckload of them – will be impacted.

On a sell off – we don’t know if there will be one. It doesn’t seem like it right now. But there are at least 12 hours left and a lot of things can change by then. Don’t predict, react. A sell off in some stocks might just provide the opportunity to buy.

We’ll keep a close track of this issue at Capital Mind. More to come!