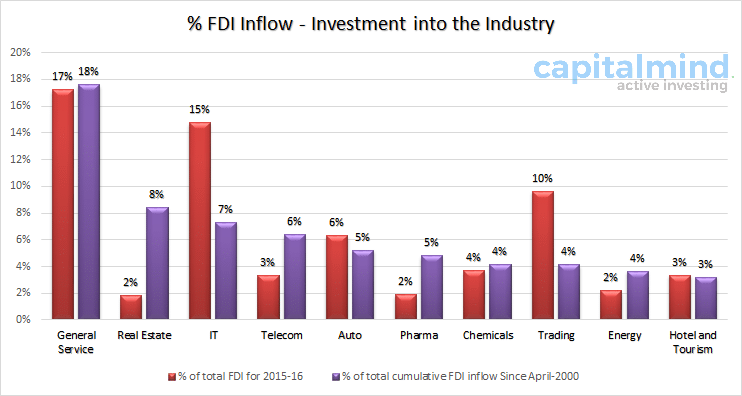 Foreign direct investment (FDI) is a strong source of foreign investment (the other being FPI, or Foreign Portfolio Investment, which is less strategic in nature). India’s cheap labor and huge consumer base, makes it an attractive destination for FDI 0 but there are a number of laws that restrict what foreign investors can set up in India, and how much they can invest. With new government initiatives like relaxing FDI norms in sectors like Defence, PSU Oil refinaries, Telecom, power Exchange etc, FDI seems to have increased.

What falls under FDI?

You know all that money you hear going to Oyo, Flipkart, Snapdeal and PayTM? All of that is FDI. Most VC investment is classified that way. So is buying more capital in Indian subsidiaries – such as purchase of more shares by Suzuki in Maruti Suzuki, or setting up of Apple India, or even Microsoft investing capital in its arms in India.

The last year has been phenomenal in terms of FDI at a time when FPI has slowed somewhat. As foreign investors lose interest in Indian public markets, the private bazaar seems to have increased action substantially. Uber alone is investing $1 billion in India, and you have the big raises at Ola, Oyo, Snapdeal and so on that add a fairly big layer of icing to the cake.

FDI Increase Has Been Strong

Foreign Direct Investment (FDI) inflow in the country increased by 29.32% compared to previous year and stood at $40 Billion for FY 2016. The FDI stood at $30.9 Billion for the same period, previous fiscal. 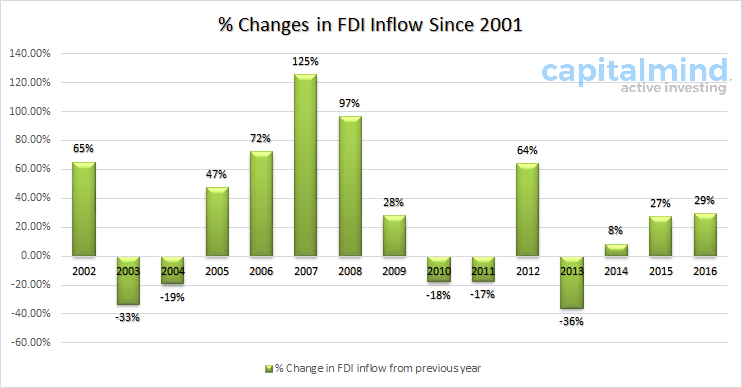 Note: If we consider reinvested earnings, equity capital of incorporated bodies and other capital, the FDI stands at $55.47 billion for FY 2016. 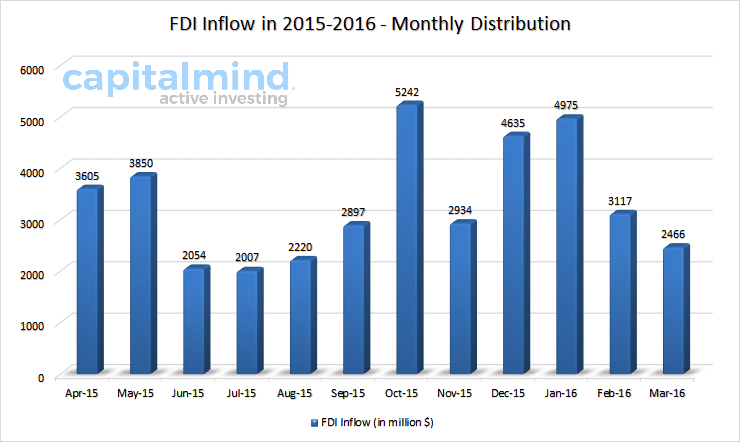 Singapore Takes The Lead Over Mauritius

As you can see, the renegotiation of the Mauritius treaty has been well understood – people have already started moving to Singapore.

To read in detail about the Mauritius Tax Treaty, visit our previous post titled “The Simplified Version: What It Means When Mauritius Based Investors Are Taxed in India From 2017“

Singapore overtook Mauritius as the top investor for the current year. Mauritius inflows declined to $8.3 billion for FY 2016 compared to previous year of $9.03 billion. The falling oil prices has prompted UAE to steadily look for other alternatives. Its FDI in India has significantly increased to $1 billion in FY 2016  from $367 million in FY 2015. Though investments from European countries has reduced, contributions from US and Japan have increased. 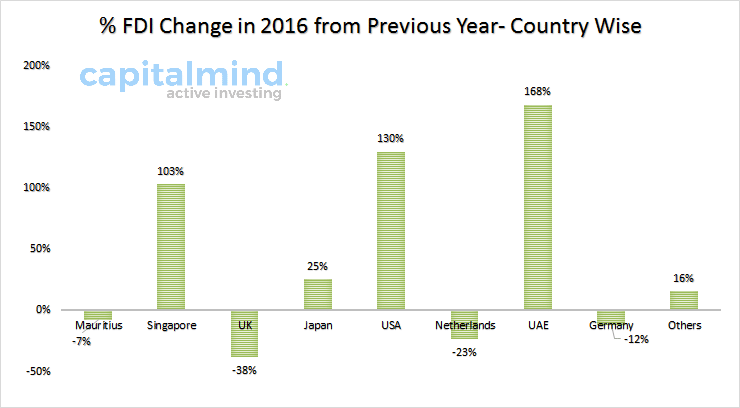 For the year the general service Industry (financial services, R&D, Tech etc) has received the highest inflows of $6.8 billion followed by IT sector with $5.9 billion. The real estate sector has not been of much interest for the investors, due to a slump in the RE market.

Foreign investors are always in awe of Indian IT industry. The FDI inflow in the IT sector has increased by 1.5 times. Their is a drastic drop of  50% in telecom sector. The huge spectrum rates and tax evasion cases against Vodafone India have made investors skeptical about this sector.

The auto sector has always seen a steady inflow of foreign investment, but for the current year, it has decreased by 7% to  $2.5 billion. Governments ban on diesel vehicles of more the 2000 cc, has put a red spot on the Indian auto industry. Investors are more cautious and want some concrete road plan next few years to invest in India. 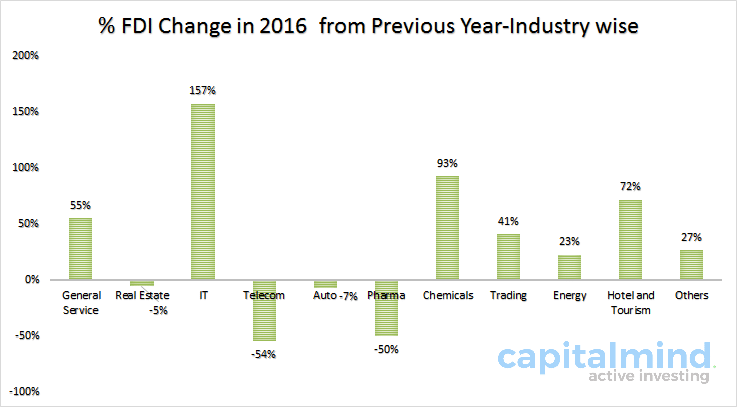 Pharma sector investments dropped by 50% to $754 million for FY 2016. Pharma has been the out performer till Dec 2015, post that most of the pharma companies (Sun, DrReddy, Cadilla, Wockhardt etc) has received the warning letters from Food and Drug Administration department of US. USA and Europe are the major export destinations for the pharma industry.

Though Government has relaxed the FDI cap in different sectors, but policies are stringent and are creating roadblocks in paving way for new projects.

The FDI cap on different industry sectors in India is listed below: 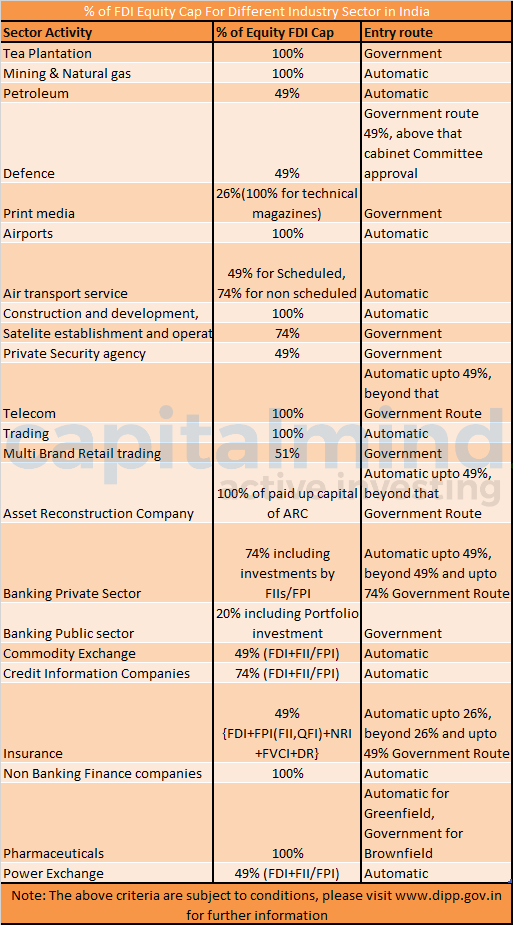 Though India has jumped 12 places in ease of doing business according to World Bank Report, but still it has not attracted enough FDI to support big economic growth. India with its huge consumer base and fast growing economy tag is still not able to catch the eyes of the US and European investors. India needs a lot more FDI which would not just bring in the money, but also the know-how to deal with growth and other complexities.

However, as the rupee is non-convertible in the capital account, Indian regulations are complex around what will be okay as FDI and what will need further approvals. Foreign capital is welcome in some sectors, like Banking, wholesale trade, IT services etc. But it’s not allowed as easily in defence, retail trade, insurance etc.

As we move ahead, the importance of FDI will be higher and higher. Capital will flow in primarily to access India’s large consumer base, rather than to set up a manufacturing hub for exports. The current model of startups may lose favour, but FDI in strong, growing sectors will always be available, and India will remain a large underserved market for a long time.

The renegotiations of treaties will impact FDI somewhat, as taxation is a solid reason many of these companies come through Mauritius. But as we are seeing, many of them have moved to Singapore instead, where the treaty is not yet changed. What will FY17 bring? We would like to see more in the defence, manufacturing and logistics sectors which have a large amount of room to grow.