India’s largest bank, SBI’s result was no different from the results of other PSU banks. With RBI’s push for banks to provision for the stressed accounts in Q3 and Q4 of FY16,  most of the profits of the PSU banks nose dived. The impact on profits due to NPA’s was a known secret, but by how much was the question. Now here we are with the results, lets take a quick look at SBI’s result.

SBI Q4 standalone profits were down by 66.23%. The consolidated profits stood at Rs 12224.59 Cr, down by 28%.  The profits declined due to high provisioning done  for NPA’s to the tune of Rs 12139.17 Crs. That’s 12,000+ cr. provisions in this quarter alone! More than double the same quarter last year, largely because the RBI has tightened up and asked banks to report NPAs correctly.

SBI’s non interest income(other income) for the current quarter added Rs 10695 Crs, which includes Rs 2034 Crs from forex gain. The profits were backed by tax write back , which added Rs 246 Crs to the profits during the quarter.

The net interest income (difference between interest earned and interest expended) stood at 15290.76 Crs for FY16, up by 3.9% from previous year. 3.9% increase is a small number, and not worthy of a bank like SBI.

SBI incurred losses to the tune of Rs 2281 Crs, for selling the non amortized loans to asset restructuring companies. Non amortized loans are those loans, whose interest is paid regularly and the principal is not. Much of this accounting is disputed by the auditors who believe that the losses shown should have been higher – they say this is underreported by over 1000 crores.

The gross NPA’s are to the tune of Rs 98172.8 Cr in the quarterly filling (which is standalone), however the Basel III disclosure filed by the bank for the year ending March 2016 shows that the consolidated Gross NPA of the bank at Rs 1.23 trillion rupees, up by 65.44%.

The top five sector which attribute to 47% of the banks gross NPA are as below:

Provisions for NPA up by 58%

SBI has a Capital Adequacy Ratio of 13%+ which is good – and was supported by a big investment in the bank by the Government. Plus, it can get another Rs. 10,000 cr. in Tier 1 Capital (where the ratio is still under 10%) due to the revaluation of Real Estate. This augurs well for the bank’s capital adequacy going forward.

SBI has been reluctant to write down the bad loans and their are more to come. There have been increase in instances of the companies defaulting on the loans provided by the banks. For example, the Rs 20000 Cr loan given by the consortium of banks (led by SBI) to Alok industries have vanished in thin air.

Another famous instance is of defunct Kingfisher airlines which owes Rs 9000 Cr to the consortium of Banks (led by SBI). And adding to the woes, now the Punjab government is asking the consortium of banks (again led by SBI) to waive off Rs 5000 Crs.

Fresh Slippages – that means accounts going from regular to NPA – were over 30,000 cr. in the quarter itself. The provisions they have are about 42,000 cr. which only covers 60% of their requirements – a Provision Coverage Ratio of 60% is much lesser than the RBI suggested PCR of 70%. Meaning, as they bump up their PCR to the required 70% they will take on even more provisions. 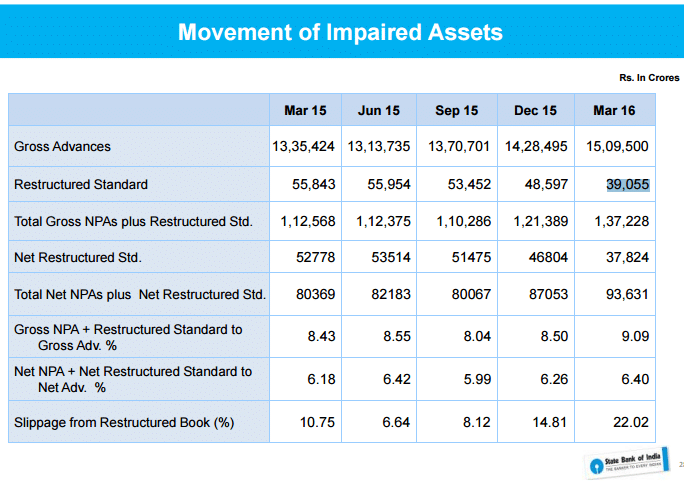 And then, they have 31,000 cr. in “Stressed assets” – which are regular loans that aren’t yet NPA. The SBI Chairman said about 70% of these too are likely to slip into NPA, speaking conservatively. 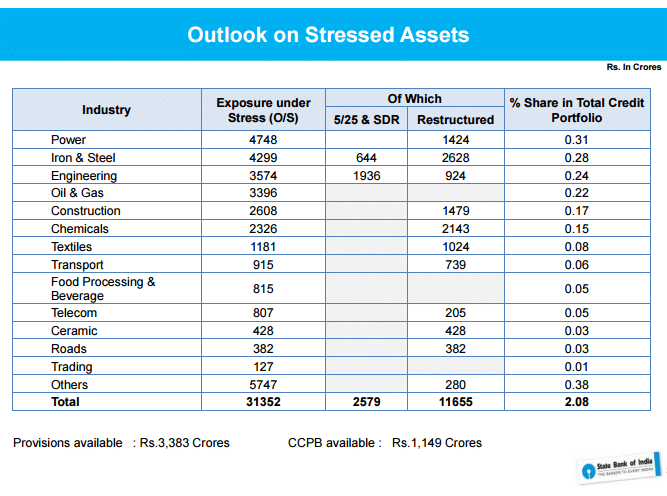 The major question what arises here is, are the banks doing enough due diligence process while providing the loans? Are they checking the inventory of the loanee to assure its advances have not vanished? Have they analysed the risk associated with the business they are giving loans? or its just the market share that matters? This not the end of the NPA crisis, but their still more to come.

SBI’s stock has gone up substantially, ending at 195 (it even crossed 200 in the day!). This is on heavy volume. It goes to say that the picture we see in the results doesn’t seem to be the picture other investors see – perhaps they believe this is the end. Undoubtedly, you could have seen much worse from SBI, and the SBI chairman said that too – that FY17 would not pose a pretty picture. But as investors remain optimistic, will the bank see the worst behind it? The chart shows that at least some investors seem to think so. 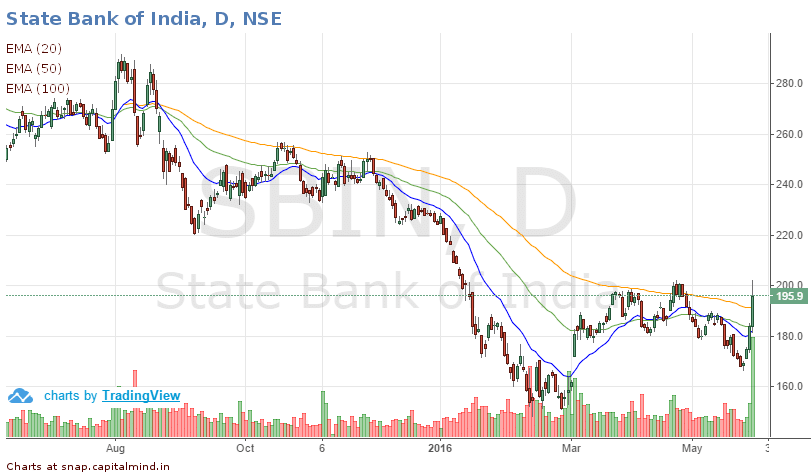 Disclosure: No holding in SBI, and no relationship with the bank, of the analyst, family or company.