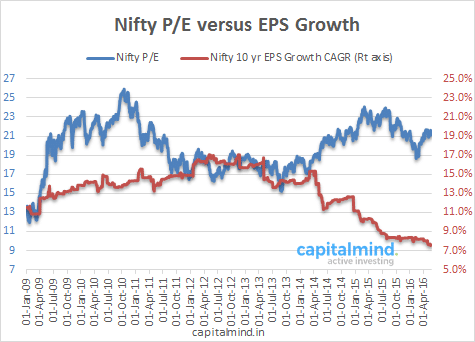 I was at Thailand at the Traders’ Carnival, and only got back today. The conference was great and hit all the right notes, and there’s so much to write! But here’s one first off.

Samir Arora of Helios Capital had presented that the concept of using a one year earnings growth against the Nifty P/E wasn’t correct – in fact that the Nifty would go up and down and the P/E would keep shifting, as would EPS growth. He used a chart saying that if you work forward over the longer term, earnings growth would “catch up” with the P/E. Unfortunately his table seemed to end around the FY14/FY15 levels.

So I decided to chart the Nifty P/E and EPS growth on a 10 year compounded basis, rather than a one year move. This has resulted in two things:

The Nifty’s Price to Earnings Ratio Over 10 Year CAGR

The 10 Year Compounded Annual Growth Rate of Earnings is at the lowest it has been since forever. At 7.6% annual growth, Nifty Earnings have grown lower than, well, the Fixed Deposit rate through this period 🙂

Of course, in these 10 years, a number of stocks have been moved out of the Nifty because they were, to put it lightly, lousy. From DLF to Unitech to JP associates, some of the older holdings in the Nifty have had such bad earnings growth – or in fact the lack of any earning at all – that if you had held the stocks in the Nifty your performance would be further worse.

The One Year Picture: Still A Mess

And yes, the one year EPS growth to the P/E isn’t all that stellar. Earnings, after most Nifty co results are in now, are still negative in terms of growth – meaning, they’ve contracted yet aga 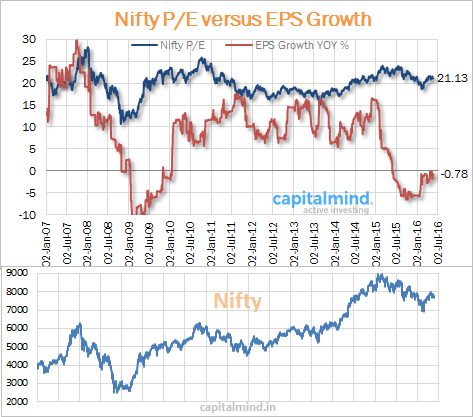 Of course, there’s always the big thing to say: India has potential, who else is growing at this rate, look at how much interest there is in India etc. This was true in the past of Japan and of China, and love for a fast growth country might not really last forever. The only way to reverse this cycle is to show some kind of earnings growth that isn’t as bad as what we have today.

But remember: Markets don’t always care about fundamentals. Sometimes, even over the long term.