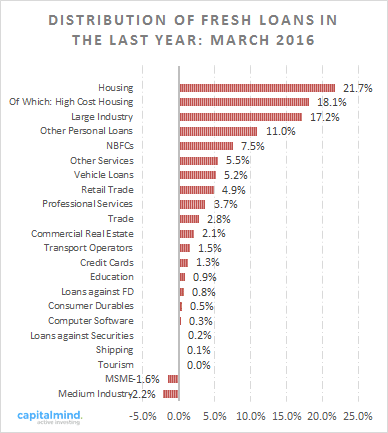 The macro world of banking always fascinates us – here’s some graphs and data on how our banking situation is:

• The Victim: Manufacturing Industry Growth Falls Off A Cliff

• And You Can’t Trade In India Either: Wholesale Traders Don’t Seem To Borrow As Much

• Our View: Not So Rosy, the India Story

Bank Credit and Deposits have grown at the lowest speed for the last few years. Both now hover around 10%, which is miserably low compared to earlier. 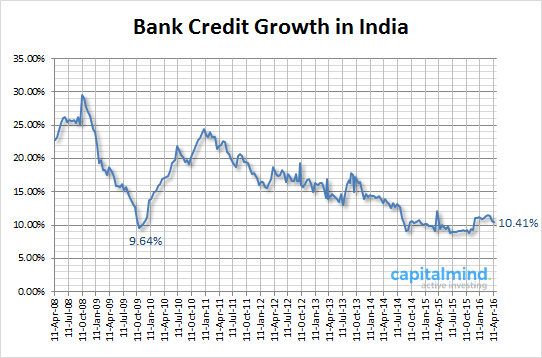 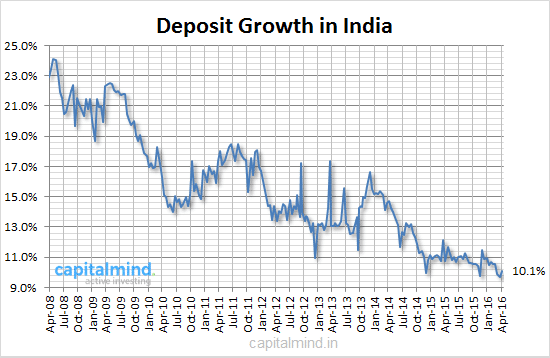 This will have a big impact on the banking system, and it comes from two sources:

• Bank credit growth is a function of demand and with lower inflation there is lower aggregate demand. With 5% inflation and about 5-7% growth what you can expect is that credit demand will indeed grow at 10-12%.

• As NPAs increase, credit growth will fall – because at the NPA level you have to recognize losses and eventually that much credit is “removed” from the system.

And when credit slows, so do deposits. If I give you a loan and you park the money with me, my deposits have grown and so has my credit. Credit in fact creates deposits – the lack of deposit growth is not surprising when credit growth is absent.

Banks will hurt going forward, because they need credit growth to fuel their margins. If I can lend out Rs. 100 and next year I only lend out Rs. 110, my profits will grow only by 10% even if I retain my margins. So I should increase my lending rate spreads (not possible in a situation like MCLR) or reduce my costs (which have helped banks but will only go so far). Reduced credit growth will dramatically slow down the 20%+ profit expectations that we have come to desire of some big private sector names now.

The focus on NPAs has caused one big sector to hurt in terms of credit growth: Industry.

Large industry has seen growth fall to just 2.7% year on year. And that’s the biggest component of lending in our country! (Lending to Large Industry accounts for 34% of all loans in the country, greater than any other sector) 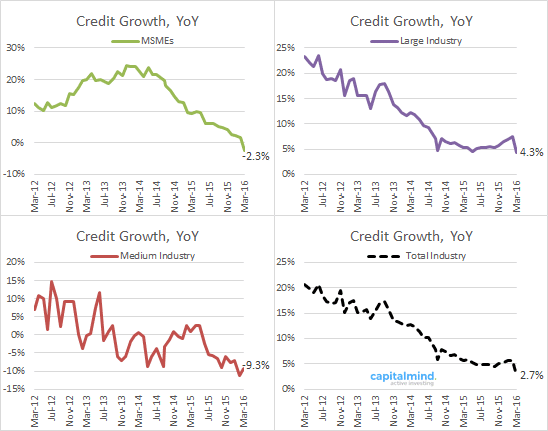 • Growth in the MSME credit and

Both are in deep negative territory, and trending further downwards, which is a disturbing sign. In what seems to be a big “Make in India” push, the lack of credit growth means that people aren’t manufacturing in India just yet.

But They’re Not Trading in India Either

If they’re not Making in India, are they buying from someone else and trading in India? The credit to the trading sector – the one that does wholesale and retail, and is largely dependent on credit to maintain inventories – has also fallen. Credit growth has sunk to 4.2% overall. Wholesale credit fell 6% year on year, while retail credit growth has remained at about 15%. 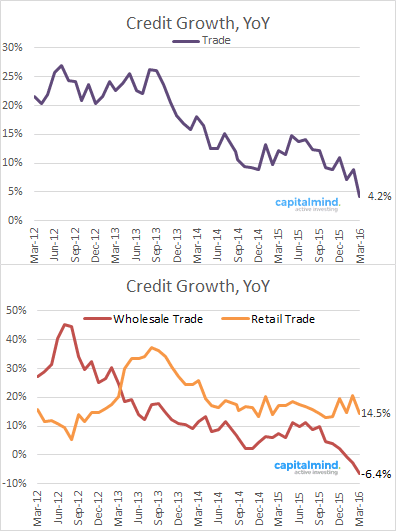 You might attribute this to either the entry of Patanjali into FMCG – which means there is a change in credit parameters, or to the growth of Amazon/Flipkart/Snapdeal where better deals are available through VC funded mechanisms rather than bank credit. Or, in the worst case, it’s an actual contraction of demand that is keeping credit demand low.

You might think prices have plateaued in housing, or that developers are in trouble. But banks seem to be lending even more to this troubled sector. In fact loans to the “high cost housing” sector have gone up by nearly 100,000 cr. in the last year.

This makes housing the biggest taker of credit in the last one year – even more than large industry.

And within this, we see that the lower cost housing (called Priority Sector Housing) has been taking the same amount of fresh money, but high cost housing loans have simply ballooned. The problem with this is:

• If the builders default, the borrowers are likely to throw up their arms as well, unless it’s their first property, which they might try to rescue in some way.

• There will be NPAs in the high cost sector if borrowers choose not to repay, apportioning blame on the builder, and courts will be favourable.

• The scary part is scale of the problem – Rs. 100,000 cr in the last year alone – is greater than the entire amount lent to large industry in the last one year. The high cost housing sector has an outstanding loan of Rs. 400,000 crores of which over 200,000 cr. were loans given in the last two years. If many under-construction projects fail, we are going to see bank losses rush to tens of thousands of crores just due to this bust.

The housing bubble is, in our opinion, going bust as we speak. It’s a slow cycle, and prices will peak about two years before a bust is visible. And prices seem to have peaked in 2014.

Our View: That India Story Isn’t Looking That Great Just Yet

While Banking has been a market darling, it’s time that our debt woes come home too. We’re seeing a debt collapse in China, and some in Indonesia and Singapore as well. We’re going to see more in India, and the worst is yet to come.

Meanwhile, the housing bubble going bust will hurt the banking system much more now as it has overexposed itself to the higher cost housing industry. While it might still be that housing can be rescued by government policy, remember that it is still the most favoured sector and there’s not much more room for incentives.

We believe that there is going to be a rapid change in the banking system, and the system will favour newer banks who have less baggage (NPAs) compared to the old ones.

But more important, in our opinion, is to take cognizance of the fact that the banking data is showing signs of a potential slowdown. With all trends looking stagnant or negative (except housing!) we are probably seeing early signs that India isn’t exactly growing very fast. Of course, it’s probably growing faster than China, or that there’s hardly any other place to invest in, but given other countries like Russia are bottoming out, we won’t hold that record for too long. Never ignore red flags, even as you’re chee
rful – and at Capital Mind, we strive to make you aware.

(Don’t sell everything. This is just information, it should help decide future action. Staying away from overvalued or overburdened banks is a good thing, but the risk/reward may still be favourable. Watch out for news of further debt situations, which usually follow a time when credit growth collapses.)