Wipro has announced it will buyback 40 million shares at a premium of Rs 625 per share. The buyback accounts to 1.62% of the total shares outstanding. The buyback will cost Wipro Rs 2500 Cr. The share buyback will be on proportionate and tendering basis. Wipro has announced May 6 2016 as the record date for share buyback in its BSE filing. The shareholding pattern of Wipro as filed in BSE for March 2016 is as follows:

The announcement also stated the promoters are also going to tender their shares.

What does this mean?

The share buyback is done on proportionate and tendering basis. It means that if you own 10000 shares  and you are willing to tender all your shares, then only 162 shares of yours will be bought by the company. Which is a small amount. But if you see from the promoters angle, Azim Premzi and his family owns 73.34% shares, so out of the 40 million shares to be bought back, maximum will be bought from promoters. Its an easy cash out for the promoters.

And for anyone tendering their shares, capital gains tax is applicable, because when the company buys the shares back you don’t pay STT. Only transactions where the sale sees STT paid are exempt from Long Term Capital Gains Tax. Capital Gains taxes are 20% for long term holdings (with indexation) or 10% without. For a person like Premji whose cost is next to nothing, the 10% will apply.

Update: This is no longer true! Thanks to Anup for the clarification. SEBI now allows a “tender window” on a stock exchange where clients can submit their shares through brokers into a central pool. On the Cutoff day, the company accepts the appropriate number of shares, and returns the rest to the brokers, who return any unsold shares to clients, along with a contract note for the sold shares. The contract note will have STT, and that means shares sold through a buyback will be tax free for any seller, including promoters, if the shares have been held for more than one year.

This is a loophole that is likely to be fixed by the government in the next budget, but till then we will see serious buybacks.

The decline might have been due to the investors unhappy with the level of premium being paid, apart from the lousy results.

Specifically there are two reasons; The first one being to push the share prices and second to return the surplus cash in bank balances to the shareholders.

Buybacks usually happen when the company thinks their share prices are undervalued and they have a huge cash balance. In case of Wipro the share prices have not seen much growth and have been languishing compared to its counterparts TCS and Infosys. The buyback reduces the total number of outstanding shares and enhances the EPS. The higher EPS is more attractive to the investors. With the buyback announcement the company is signalling  it is comfortable in returning a part of its earnings to the shareholders.

The huge cash in bank usually is a big negative from investor point of view. The buyback also sends a strong message that before getting into any acquisition or mergers, the company wants  to set right its core operations. Another angle to look at it can be, with the new rule of tax on the dividend received by shareholders, Wipro has avoided that with the share buyback. For 2016 they have paid only Rs 6 as dividend per share where as for the previous year they paid Rs 12 per share. 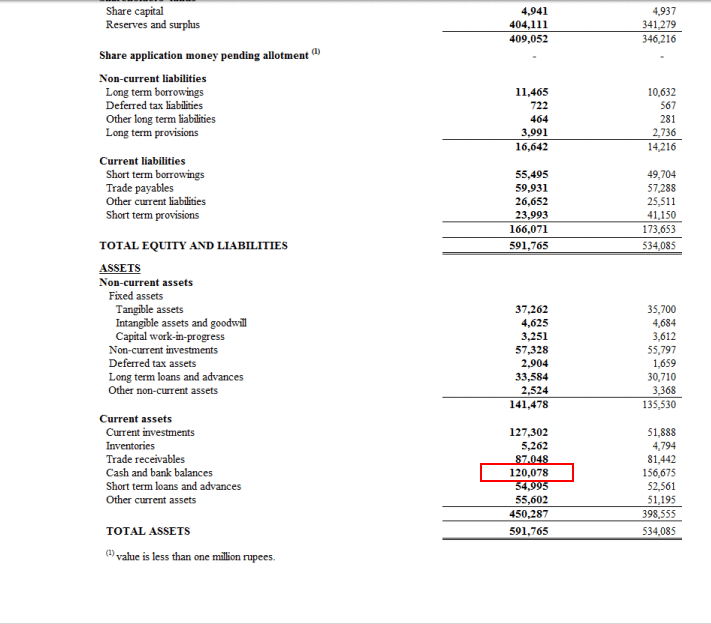 Having a look at Wipros 2016 annual balance sheet, it seems they have more than 4 times the buyback price (2500 Cr) in their bank balance. They are definitely in comfortable position to afford the buyback.

Premji owns 73% of the company and will see a minimum of 2.9 cr. shares getting accepted. This transaction will make him (and other promoter related entities) a total of Rs. 1,800 cr.

Does it make sense to tender shares?

If you are a long term holder of Wipro shares, yes, tender all your shares. The price is a good 15% higher and you’ll pay nothing extra since capital gains taxes are zero.  But you will only see 1.6% of your shares accepted. EPS changes for Wipro won’t be significant either due to the low quantity of shares being bought back.

The future for Wipro is interesting. This could be a way for Premji to slowly begin to exit the company over time:

It’s too early to say quite where Wipro will go, but the buyback tells you one thing – they aren’t doing any big ticket acquisitions or debt-led inorganic growth in the near future.