On March 29, Tata Steel announced that they would be looking to restructure its UK operations, with a view to sell of the Tata Steel UK division. The announcement was released post-market hours in India, which resulted in a massive 6.7% gain in the shares on March 30! the shares closed at Rs. 324.30, up 6.71% from the previous day’s close of Rs. 303.90. In the note submitted to the exchanges in the late hours of March 29, Tata Steel explained (in not too great detail) the Board’s strategy regarding their UK operations. Here’s the gist of what they had to say:

Long story short; Tata Steel is looking to hive off their UK operations; subject to a final announcement; however, from the tone of their statement, it looks exceedingly likely that they will indeed sell off the heavy-loss making UK arm of their steels business.

While markets in India have ostensibly reacted very favorably to this news, the emotions across the waters in UK are not quite as triumphant.

Tata Steel employs around 15,000 people in the UK – this covers Steel plants in Port Talbot, the afore-mentioned Strip Products division & their UK Long Products subsidiary. All of these jobs are now in serious jeopardy and there is huge public pressure on the UK government to step in and stabilize the situation.

In their own words, one of the major problems with the UK ops was that,

Tata Steel UK has a high number of pensioners as compared to active employees and it is in discussions with the UK Unions to create a more sustainable pension arrangement for the UK employees thereby providing a chance to sustain the business. The UK business of Tata Steel Europe is the most impacted by the surge of Chinese imports as its domestic demand continues to be weak. While the management will take all actions to make the UK business more sustainable, continued challenges due to adverse currency movement of the Pound versus the US Dollar and the Euro as also the unrelenting Chinese imports into the UK may force the Company to undertake further asset right-sizing in the near future. “

What does This Mean for the Steel Industry?

Let’s get real folks – this is massive, absolutely massive. Probably the first such instance of a major steel magnate shutting down, SHUTTING DOWN operations in a developed market. The steel industry has been beset by multiple headwinds, as enumerated by Tata Steel in their note to the exchange: supply glut, tanking prices, a near-future pessimism regarding steel price recovery, imports from Asia and other 3rd world countries. India is somewhat isolated from the threat of -steel-dumping’ by the largest global steel-makers, as Parliament just okay-ed a deal to push up MIP till 2018. This will insulate our steel companies for the near future, while they come up with ways of dealing with the crisis at hand.

Back to Britain: English media have been covering the issue extensively for the last few years ever since the sector was ravaged by the 2008 financial crises. We could’ve foreseen a major backroom change in the strategy for Tata Steel UK, as evinced by the sudden resignation of their CEO of 6 years, Dr. Karl-Ulrich Koehler in late February this year. Dr. Karl was appointed the CEO and MD of Tata Steel Europe in February 2010, and comes with a strong background in the industry. He has over 30 years of relevant industry experience, which included stints as a member of the executive committee of the World Steel Association and Vice Chairman of VDEh, the German Iron and Steel Institute. Dr. Karl was brought in from ThyssenKrupp Steel, which was another major European deal that Tata Steel was involved in.

One of the major issues facing the UK ops, is that as per EU State Aid rules, the UK government cannot offer to take over the beleaguered company, due to rules surrounding loss-making companies. A governmental intervention could have strengthened the near-future prospects of Tata Steel Uk, which would have pacified the thousands of middle-class families in the UK. However, UK Business Minister Anna Soubry said that the government would consider the option, if it existed, of holding the company’s assets until a buyer could be identified.

One thing’s for sure though – Tata Steel is getting TS UK off their books once and for all. This could have some major impact on the consolidated performance of Tata Steel. 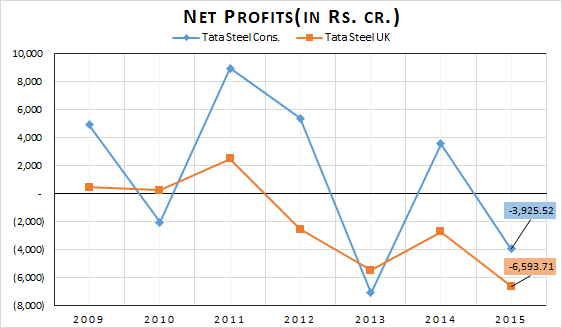 We had written about the Tata Steel (then TISCO) – Corus acquisition and what we thought about the financing behind the deal in 2007.

Tata Steel and the Corus buyout structure: Not Worth It

9 years ago, we wrote about how it sounded like a slightly bad deal to existing share-holders due to the financing. Now in hindsight, despite nobody expecting a commodity price rout, it looks like an absolute stinker; albeit one that is finally getting some closure. 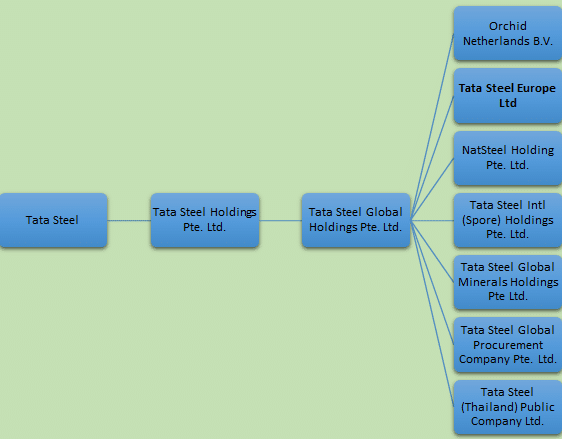 Get this – TS Europe owns 228 different companies – one of which being Tata Steel UK Limited; this is the company that is proposed to be hived off based on the latest announcement. Most of the companies with the ‘Corus’ name are pure subsidiaries under this TS Europe Ltd, but structurally separate from TS UK Ltd.

< p>Some of the 7 companies listed above, have entered into JVs with other companies in their respective regions. Corus Kalpinis Simos Cladding Industry SA (Greece) and Danieli Corus Technical Services B.V. (Netherlands) are the other Corus companies that are in JVs (not subsidiaries) with TS Europe Ltd.

The main problems with the UK subsidiary, stems from 2 main issues:

Since the 2008 financial crisis, steel prices have been among the most affected of all the commodities. Persistent low prices of steel have been exacerbated by the supply-demand inequity: Ever since the Chinese economy suffered declines in growth, China, which was the highest consumer of steel in the world, to sustain their manufacturing and developmental agendas, has seen a rapid decline in domestic steel demand. Due to this, China, which for various macro reasons has been the lowest-cost producer of steel, has had to ‘dump’ their steel onto the other steel consumers. In a developed market like the UK, where labor costs push up the domestic price of steel, dumping of cheap steel from China (and other countries like Japan and Korea) has rendered the local UK firms unable to compete. This is clearly visible in the monumental impairments that TS has had to write off in their books, vis-a-vis the Corus acquisitions.

Low steel prices have also pushed down the expectations of profitability of the firm; considering the massive amounts of leverage that was undertaken to finance the Corus acquisition, this poses some serious question marks over the sustainability of the business.

The issue here can be segregated into 2 parts:

Tata Steel UK has been suffering severely over the last few years, ever since it splurged out and massively over-paid for Corus. The ramifications of that risky move are evident now, as is seen in the following chart: 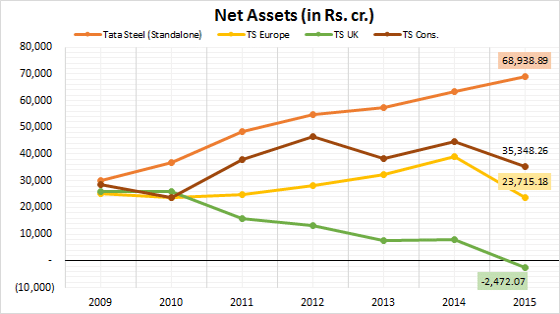 We will keep you updated as the story unfolds. What happens in the UK is of great interest to us out here, as the ramifications on both Tata Steel, and the global steel industry is yet to be seen.

P.S. All the data, including ownership details and Balance Sheet and Income Statement data, has been obtained from Tata Steel’s Annual Reports.