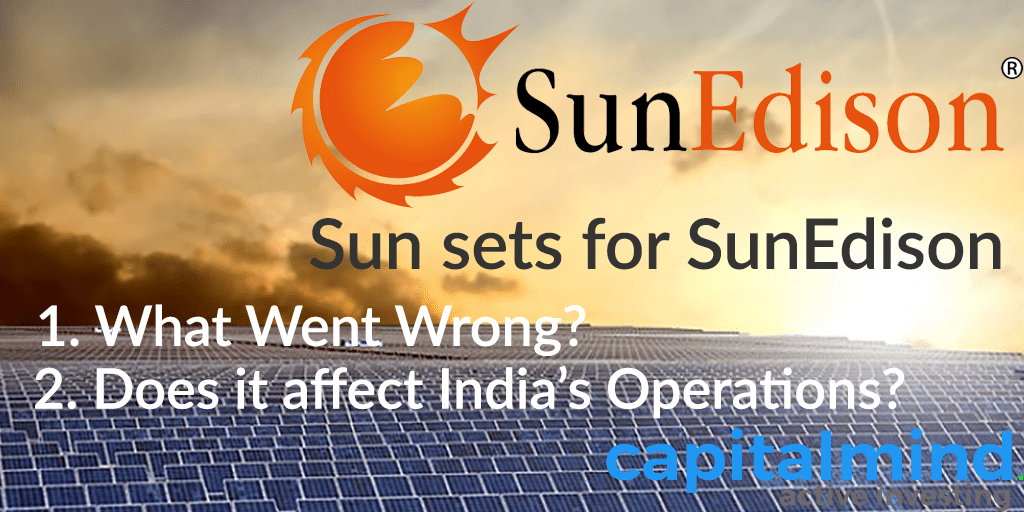 SunEdison has filed for bankruptcy under chapter 11 of bankruptcy protection last week. Though it has mentioned that its subsidiaries, called Yield Companies (explained later) TerraForm Power and TerraForm Global are not included, there is some systemic risk is associated with it. SunEdison listed $16.1 Billion as its liabilities and $20.7 Billion as its assets.

YieldCos are the spin offs of a parent company. YieldCos generally own the operating assets of the parent company. They are specifically designed to generate cash flows and pay major portion of their earnings as dividends. YieldCos are more common in energy sector, particularly renewable energy. These are done to separate the volatile activities from the cash generating operations.

This is a lot like Suzlon, which might build wind power equipment but have a subsidiary that uses them to generate power and pay dividends back to the parent from the cash generated.

The YieldCos make more sense with energy sector as the company’s have long term energy purchasing power agreements and constantly generate the income. YieldCos are less risky and comparatively have low cost of generating equity.

In SunEdison’s case TerraForm power and TerraForm Global were the YieldCos. According to agreement between SunEdison and its YieldCos, SunEdison would collect increasing share of dividends  as they grow, reaching a upper limit of 50 cents for every additional dollar paid as dividend after 45.14 cents a share. The payment’s were known as Incentive Distribution rights (IDR).

What does Chapter 11 of bankruptcy protection mean ?

The filing of chapter 11 under bankruptcy protection means that the company can’t pay its debt in full, so it needs protection from having to pay some lenders versus others. Under this code the company can file a petition in a U.S court seeking for restructuring its business and seek more time to pay its creditors. The filing of chapter 11 doesn’t mean a complete wipe out of equity, as there might be chances that the company will have money left after the bankruptcy is done.

In Chapter 11, the assets of the company will be liquidated and the proceeds distributed. The shareholders are the last lot to get their money back. The order of the preference goes like this: Government taxes, Senior debt, subordinate debt, preferred equity holders, then comes the normal shareholders. So at the end the shareholders are left with negligible or no amount.

Simple: Too much investment, and too little cash flow. SunEdison was not able to sustain its rapid expansion involving acquisitions and installation of new projects.

The company went in major acquisition spree in 2014 and 2015. SunEdison along with its subsidiaries struck 17 deals in 2015 and 9 deals in 2014. The successful deal of First Wind LLC for $2.4 billion made Sun Edison the worlds largest renewable energy company. SunEdison also made some failed attempts to acquire Latin America power for $700 million, Continuum Wind Energy for $600 million and Globeleq Mesoamerica for $337 million. the acquisitions were the major reasons to push SunEdison to brink. SunEdison’s debt grew from $9 billion in Sept 2014 to $16.1 billion in Sept 2015.

The investors till then were under assumption that the SunEdison has enough reserves and cash avenues to go on a acquisition spree. But the trouble started with the bid to acquire Vivint Solar for $2.2 Billion in cash with a 52% premium. The deal got cancelled as SunEdison failed to raise the amount for acquisition. SunEdison’s stock price started declining once the deal was initially made on July 20, 2015. Within one month the stocks tanked by 62%.

SunEdison went for major acquisitions to increase the cash flow of TerraForm power and  in turn increase its IDR. David Tepper also filed legal suit against SunEdison for its role in Vivint deal. TerraForm’s former management also accused SunEdison of board coupe in TerraForm Power to pursue the Vivint deal and also alleged that SunEdison mislead TerraForm Power with its disclosures and financial health.

SunEdison India currently has an installed capacity of  55o MW and has 1.7GW in pipeline. With the bankruptcy announcement, the ongoing projects in India will also be affected. SunEdison has recently set a record in India with its lowest bid of Rs 4.63/KWH for 500MW in Andhra Pradesh. What will happen? They might choose to sell these projects, or the government will have to ask for bids again.

SunEdison’s overall market impact may not be much, but it presents a view into what happens when easy money stops being easy. With the world awash in debt at low, and in many cases, negative rates, will the retribution come in the form of debt defaults and thus raise costs for industries that have come to believe money is easy? SunEdison might not be the first, but it won’t be the last default either.