The idea is both to reduce rates and the corridor of rates (which used to be 1% – Reverse repo was 1% below, MSF 1% above) 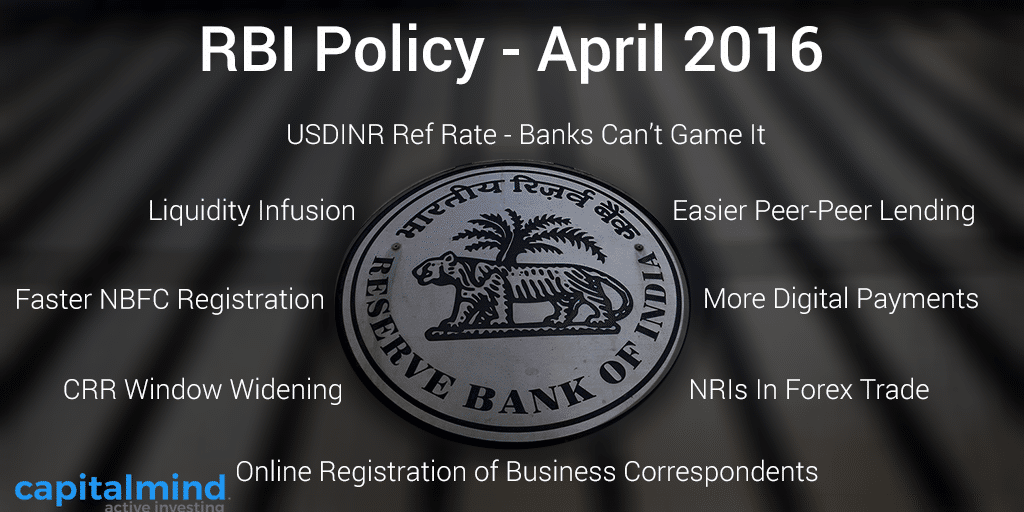 Read: What is the Marginal Standing Facility?

Liquidity Infusion by the RBI

Instead of maintaining large overnight borrowing from banks (money taken by them one evening and returned the next day) which has been going on for two years now,  RBI will add money to banks by directly buying bonds outright (or dollars) from the market.

This does a complex things for banks – it gives them money in the same manner that QE works in the west – where the central bank prints money to buy bonds and gives money to banks (who they buy these bonds from).

We see this as a negative as banks were using “tight liquidity” as an excuse to keep rates high. Now that they will have adequate money they will have to cut rates and reduce their margins.

Also, given how banks operate, they will keep borrowing from the RBI, and RBI will then print money to add liquidity. When such growth is more than the real growth of the economy, it will be inflationary, and then RBI will have to work rates higher. This hasnt happened in the west largely because there is very low credit demand in the economy and banks don’t have opportunities to lend – that’s not so in India.

Banks have to maintain 4% of all their deposits as a Cash Reserve Ratio (CRR) with the RBI. This money gives no interest.

The amount every day is: you need to have 4% of the deposits as of two weeks ago.

But to account for late evening issues, banks used to be allowed a wide window – they can be as low as 95% of the limit as long as as their weightedaverage CRR for the fortnight is equal to 4% of the two-week-ago number.

Helps banks, but not by much; just manages their cash marginally better. But banks are terrible managers of CRR money so they always store excess money with RBI, as a whole.

Markets – Gilt Account Holders Will Be Able To Trade Directly

If you own a Gilt account – called a CSGL account, and anyone can create one – you will be able to trade directly on the RBI platform called NDS-OM where these securities are traded.

This makes sense for retail accounts to trade “odd lot” government securities, and for institutions like Foreign Investors to bypass banks/brokers in getting prices and settlement on larger trades.

One of the biggest hurdles to “Invest in India” is the NBFC regulation, which requires any company that lends or invests money to be registered with the RBI. This makes little sense and worse, RBI’s registration processes were long, onerous and full of pain.

This will be fixed apparently. But there’s no time frame given.

By April 30 we will see a draft paper that allows companies to intermediate peer-to-peer lending – so that if you want to lend money to, say, me, you can do it easily. There is the small question of what will you do if I don’t return the money, for which there is really no great answer other than – ask the Venture Capitalists of such peer to peer lenders to pay you back.

Credit risk aside, the paper will address operational issues such as – should the intermediary handle the money or the repayment, what rules will apply to whom, etc.

BCs can intermediate bank products – specially to the poorer sector – and get paid a commission. These people are currently appointed separately by each bank and trained. This will now change to a  single industry wide certification, that allows them to do more than just deposits; plus, there will be a centralized database of all such BCs.

By end April, there will be a two year vision document for payments in the country, to ensure less cash in the system versus digital payments.

Currently the RBI calls banks and asks them their best buy/sell rates for the dollar/pound etc. and that averages out across banks to determine the rate for the day. We all know what happened in the big LIBOR scandal, where banks colluded with each other to keep “polled” rates up or down to their advantage (based on their trading positions)

Since banks and players are required to post all trades to the RBI within half an hour, the RBI will now use the actual traded rates to determine the daily reference rate. The daily ref rate is used in many contracts by companies and banks to determine payouts and triggers, so this an important thing. And this is great as a development because it reduces bank influence on rates.

While this policy has given a general direction, the meat of it is in what still needs to be done. A year or so ago, the RBI said they would allow retail public to buy gilts directly – even now, that platform has not been made open. Heck, to even buy the new gold bonds, you had to go through a bank because the software used to record the bond sale is only available to banks! (E-Mudra)

We would expect a lot more as the year unfolds. Overall the policy in terms of lowering rates is decent, but we also know that the MCLR will lower rates automatically in the next few months too. Further, the increasing of liquidity, in our opinion, will need banks to get themselves to be much better at cash management, and will hurt existing banks in the medium term.

New regulations on NBFCs, P2P lending and markets are good news, but the nuances will determine the way forward.

From an economy perspective this is a good policy, and the market commentary has been excellent by the RBI. However, what remains now is the actual implementation of this vision over the year. For banks, the one thing they said they wanted – liquidity – is here. Will they shape up and take advantage or find something else to crib about? My hope is the former, but reality says it will be the latter. Prepare for an upheaval in banking as the inefficiencies of individual banks get exposed over the next year.