Maruti Suzuki – India’s leading passenger vehicle manufacturer reported an Overall Sales of 1.42 million units compared to 1.29 million units a year ago. The company has broken ground on the Gujarat plant which is expected to be commissioned in early January, 2017 (5 month ahead of its planned commissioning).

Here is how the financials of the company stand at:

Note: All values reported here are in crores and the source of the data is Company Presentation and Results for the Quarter ended 31st March, 2016)

Here is what the Managing Director had to say:

Maruti, which had been mandated by parent Suzuki Motor to produce and market vehicles for the African West Asian and some South Asian markets, has commenced feasibility studies to evaluate the potential of setting up a unit in Africa. But a final decision has not been taken yet.

Here is what the company Chairman had to add:

We are taking forward Make in India programme with our manufacturing and we hope to grow in double digits in 2016-17. We are again setting a target of repeating double-digit growth despite the many challenges in the way. It’s not going to be an easy year in any way.

Our current capacity is around 1.43 million units from the two plants. Our engineers are working to enhance it. We can stretch it up to 1.57 million units but will be mostly in Manesar since we cannot increase production at the Gurgaon plant much as movement of heavy trucks create inconvenience to the people staying around the plant.

On Africa – We have a team in place now for land acquisition. We have allocated Rs 800 crore for building sales and marketing infrastructure. If required, we can step this up further.

Here is the excerpt from the Management Call:

Below chart shows the co-relation of Export Units and Export Revenue: 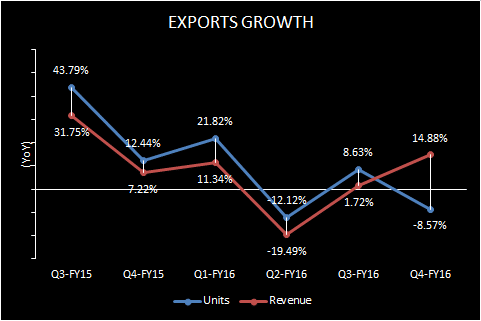 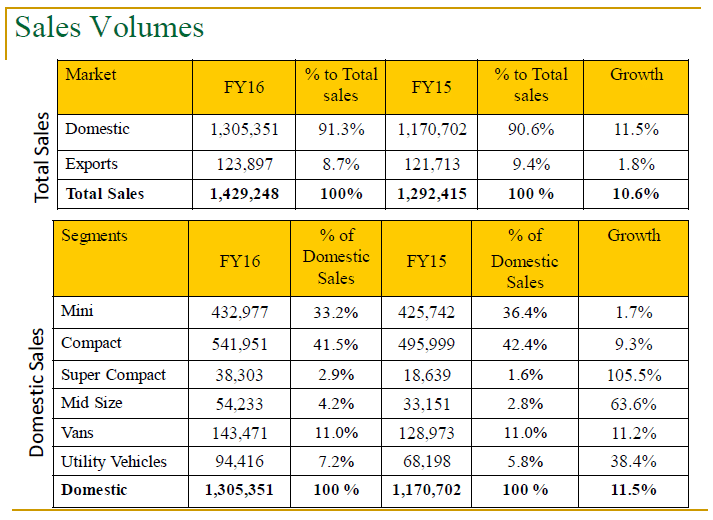