The Indian Tea (Camellia Sinensis) Industry is one of the most labour intensive in the country. After the Indian Railways, the Indian Tea Industry is the largest employer and it also employs a large number of women workforce. The tea industry on the whole employs 1.1 million people.

Today, India is one of the largest tea producers in the world as well as one of the largest consumer as well with over 70% of the tea produced in India gets consumed in India itself. There are 3 prominent tea growing regions in India i.e. Darjeeling, Assam and Nilgiri. While Darjeeling and Assam are located in the Northeast regions, Nilgiri is a part of the southern region of the country. The wide range of tea available in India is unparalleled. 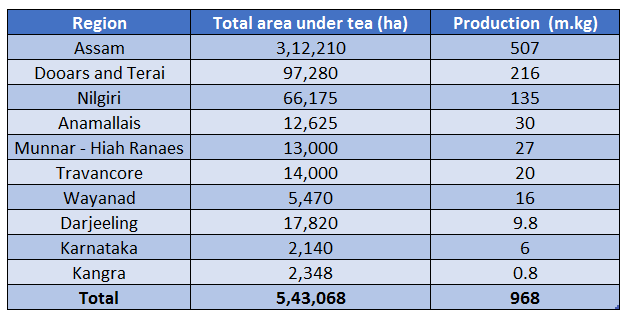 Though the Indian tea is famous all over the world, the produce from other parts of the globe also make an impact. As of 2014, tea exports touched a high of US$7 billion. While the Asian countries account for the highest dollar value worth of tea exports, Indonesia, India, China, Sri Lanka and Kenya are the world’s largest tea-exporting countries.

While it is debatable as to which country is the leader, a shortage of production in either of these countries can lead to an economic crisis.

The African continent which is a major producer and exporter of tea has been reeling under drought for some time now. A November, 2015 report mentioned the fact that “There was little rainfall during the July and August planting months which could cause the worst harvest in years. Farmers will only know the extent of their losses in the first half of 2016 when the volume of the final harvest is known.

Although it is difficult to evaluate the true impact of the drought at this stage, we expect it to be significant and if things stand the way they are now, there will not be enough volume to service both the local and export demand.”

A 2015 report places the African continent’s Kenya (16 tea-growing districts) as the third largest exporter of tea in the world behind China and India, Kenya exports approx. 396,641 metric tonnes of tea annually thereby contributing from 17-20% of the country’s total export revenue.

With the drought in Africa affecting the tea produce and exports, the onset of another El Nino over the Indian landscape will add a lot of vacuum to the export market ready to be captured by the other major tea producing and exporting countries.

Some of the challenges faced by the Industry other than inadequate rainfall on which most of the agricultural crops depend on (the first flush is expected during the March-April period and a higher chances of El Nino looms over the entire country), the tea industry is bogged down by numerous other challenges such as bad weather conditions or climate changes, wage issues (manpower accounts for 60% of the cost the industry incurs) with plantation labourers including migration of labourers to other industries (Doyapore Tea Estate lockout rendering 800+ jobless, Duncans Goenka Group shut down seven of its tea gardens in North Bengal, close to 25,000 people became unemployed) rising input costs (PF, annual leave, sick leave, festival leave, bonus, housing, medical expenses, rations and basic protective gears like chappal, umbrella and blanket of the garden workers that has to be covered for), effect of unsold and old stock and not to forget the currency exposure due to dollar exports. Tea is the common thread that binds poll-bound Assam, Bengal, Tamil Nadu and Kerala. A major vote bank that no party can ignore as most of them are from the tea workers’ community. The regions cover 8.8 lakh permanent plantation workers between them (remember that Kerala and West Bengal go to elections this year).

In the past, there have been instances where political parties demanded wage hike, house each for workers, a government hospital and roads to the estate including food grain and water support.

Tea production therefore is geographically limited to a few areas around the world and it is highly sensitive to changes in growing conditions. Importantly, its ideal growing conditions are at high risk and expected to significantly change under climate change.

Apart from the 3 prominent tea growing regions in India i.e. Darjeeling, Assam and Nilgiri. While Darjeeling and Assam are located in the Northeast regions, Nilgiri is a part of the southern region of the country. The wide range of tea available in India is unparalleled. There are mainly two ways of producing tea in India i.e. CTC (crush, tear and curl) production mostly used in tea bags and the Orthodox production – consisting of five stages, namely withering, rolling, fermentation, drying and finally storing.

Although CTC leaves dominate the Indian tea-scape, orthodox tea holds a premium thanks to its higher quality. 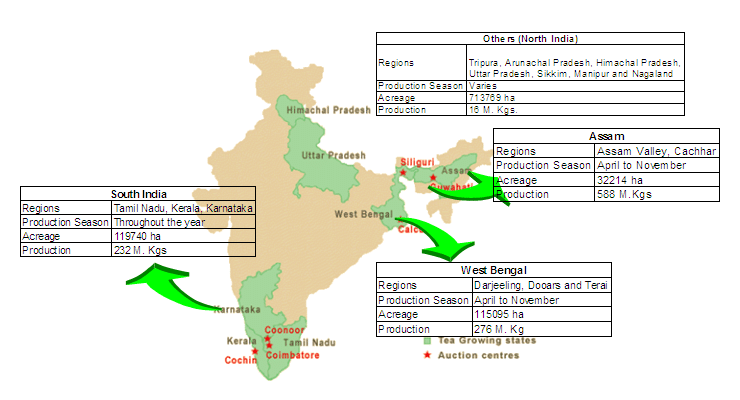 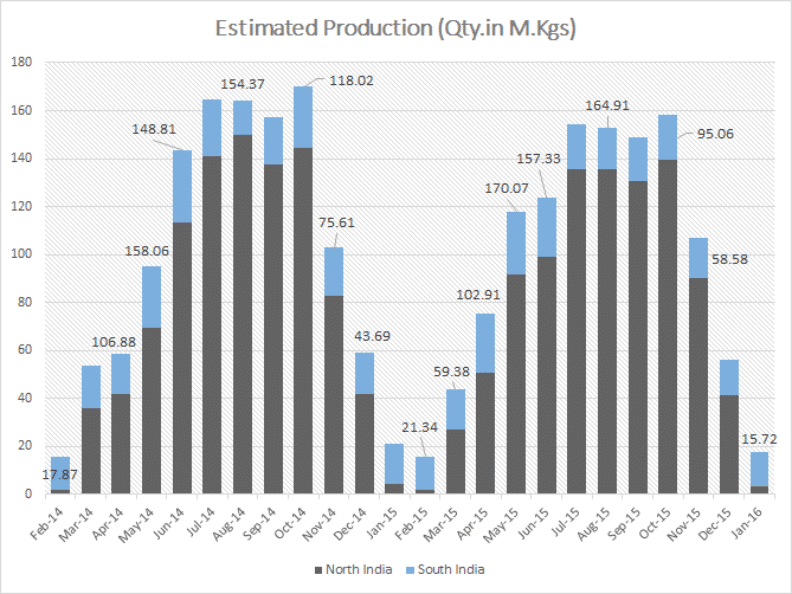 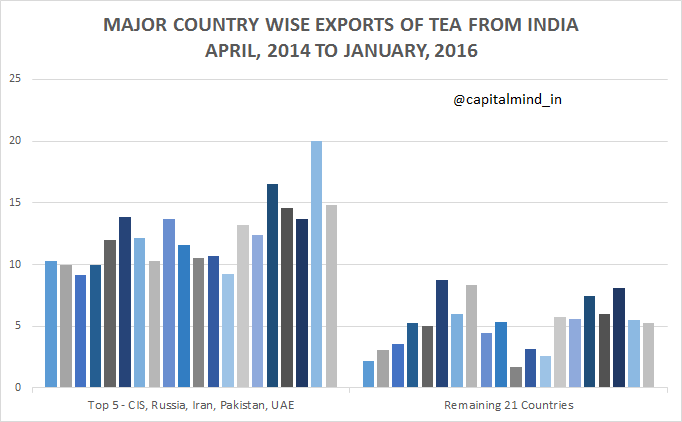 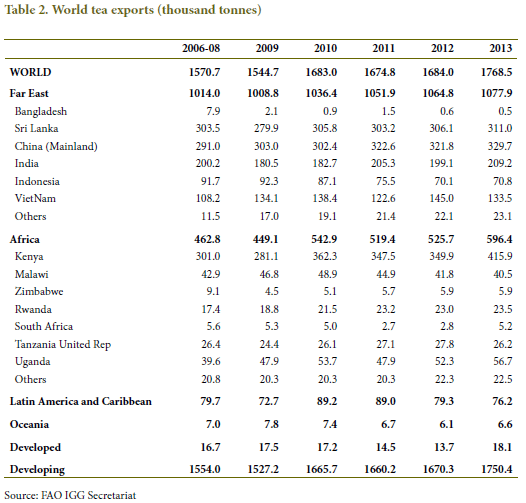 A 2015 United Nations report mentions the price elasticity of tea in relation to demand.

Price elasticity for black tea vary between -0.32 and -0.80, which means that a 10% increase in black tea retail prices will lead to a decline in demand for black tea between 3.2 % and 8%.

Estimates for prices elasticities for green tea range between -0.69 and -0.98. Similarly, a 10% increase in green tea retail prices will lead to a decline in the demand for green tea of 6.9% to about 10%. 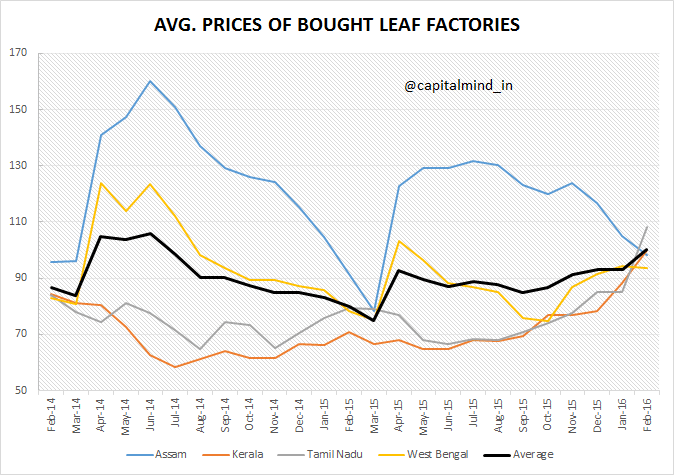 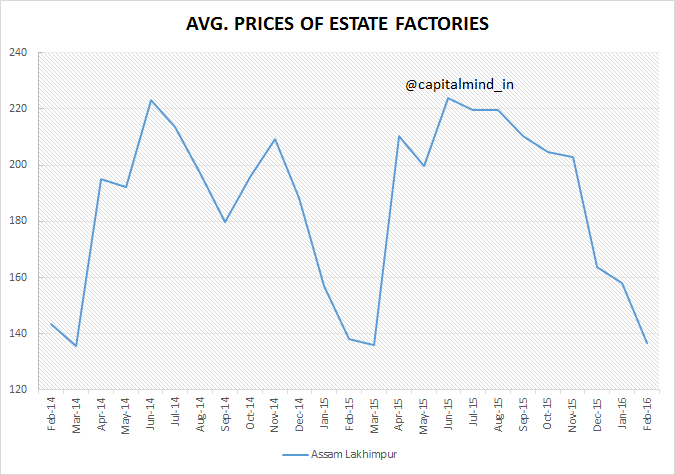 Due to the high demand for tea, commercial traders like Unilever, Tata Tea, Tekanne Group, PG Tips, and Associated British Foods have been able to globalize the market of tea in every nook and cranny of the world. Even the startup fever has gripped this industry with the entry of Teabox (claims to ship to over 93 countries and generates over 95 per cent of their revenue from customers outside India) and Chai point (claim to have sold 10mn chai glasses sold over the year in 2014).

The Indian Tea Industry alone is covered by over 30 listed entities. We however, look at the financials of a couple of them with over 50 crore in market capitalization.

Tata global is a multiple asset company – it licenses the Starbucks brand for retail presence, it owns plantations etc. We can’t treat it as pure-play tea, but it’s a big player all right.

The largest tea producing Company in the world with forty-eight tea estates in the Assam Valley and five in the Dooars region of West Bengal and multiple overseas sites.

In one of the recent interviews, here is what Kamal Baheti the CFO of Mcleod Russel had to say on 22-Mar-16:

Rossell Tea produces some of the finest CTC and Orthodox Tea, which is also exported to USA, UK, Germany, Japan, Iran, UAE and other destinations. It is known for its dedication to quality and its ability to produce 5.8 Million Kgs of quality tea, consistently for tea connoisseurs, across the globe.

Jay Shree Tea & Industries Ltd. is a part of well diversified conglomerate of B.K Birla Group. It is the third largest tea producer in the world with 27 tea estates spread across India and multiple overseas.

The company operates 14 state-of-the-art factories, 14 tea estates and gardens spread over 14,000 hectares. The company manufactures around 15 mn kg. of tea and being a bulk manufacturer, 95% of the operations are done through B2B route.

Part of the Amalgamations Group, its plantations are nestled 5000 feet up in the pristine blue mountains of Southern India (Nilgiris).

The company is now one of the ten largest tea producers in India. The Company’s tea packaging and blending units are located in Dhunseri Tea Estate (Assam) and at Jaipur (Rajasthan).

Our View:
Given the current economic scenario of Africa which is expected to produce and export lower quantities of tea and with access to Pakistan and Iranian economies, India stands in a prime spot to gain global market share in tea exports.

However, this fact maybe buoyed by the Indian monsoons which may play spoil sport. So not only would these monsoons dictate the quantity and influence the domestic prices, their impact would be felt internationally as well as a lower global production from 2 (India and Africa together produce over 33% of the world production) of the 5 top exporting countries could result in a higher export prices.

If the monsoons are as expected, the industry may witness a strong start to the new plantation year which would further lower the chances of a higher input costs and expenses.

Tea companies operate on low margins of 10% or less. With their input costs remaining stable, a 10% jump in output prices will double their EBIDTA, making them attractive buys. However we expect this to be a one-season play at the maximum, since tea production next year is likely to be quite strong – estates will boom with a La Nina, and increase productivity which will stabilize prices.

We are looking to add Tea companies to our Long-Term/Medium-Term portfolios
as we get more clarity. More on that in a separate post.