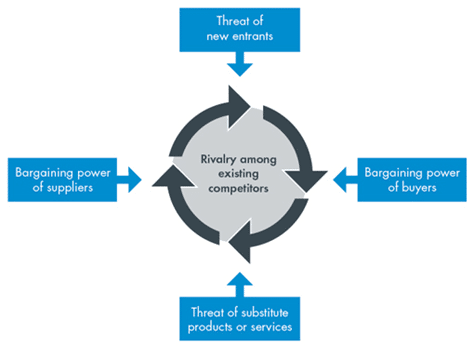 In two posts earlier, our guest Ravi Duggirala has mentioned about the issues at Kaveri Seeds. This one is a follow up. Please read:

Ravi Duggirala is a budding value investor and an ardent admirer of Warren Buffet, Charlie Munger and Prof Sanjay Bakshi. (Full Bio Below)

Ministry of Agriculture has issued a notification last month fixing the maximum selling price of BT cotton seeds at ₹800 for FY17 throughout the country.The G.O. also stated that the trait value or royalty fees that technology providers can charge, should not exceed ₹49 per packet. Mahyco Monsanto Biotech Limited (MMBL) has been charging a royalty of ₹160-₹180 per packet from the past few years. Earlier BT cotton seeds were sold between ₹830-1050 across various states in India. With this notification, the govt has brought in uniform pricing all over India.

This is inline with the recommendations of the nine member committee set up by the government, and is supposed to benefit nearly 80 lakh cotton farmers across the country. An interesting point to note is that, the economic survey report released in February expressed contrasting views on this matter. 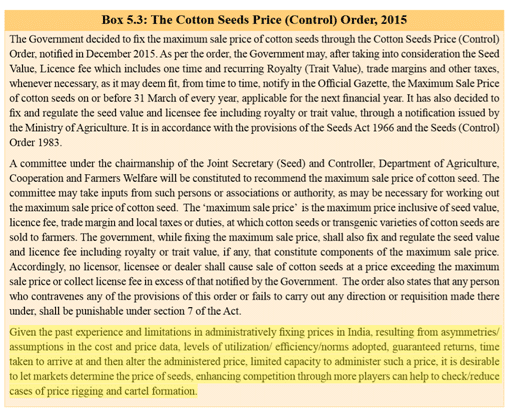 Some key developments in the whole episode are as follows

In this backdrop of these events, lets have a quick re-look at our earlier analysis of the possible outcomes

This is out of question as government has already started regulating the maximum selling price through the Cotton Seeds Price (Control) Order, 2015.

Outcome#2: Govt controls the MSP but does not interfere in fixing the ‘trait value’.

This if it happens would be a big blow to the Indian seed companies like Kaveri,Ajeet etc. On one end, their selling price would be capped and on the other hand, they would have to shell out royalty as stipulated by MMBL. The royalty charged by MMBL for FY15 stands at Rs 160-180 per packet. If the MSP is set at Rs. 635-800 per packet, they stand to see substantially reduced margins.

This is exactly what the government is doing currently. It has fixed the maximum selling price and trait value to be charged for FY17 throughout India.

Porter’s five forces analysis is a framework that attempts to analyze the level of competition within an industry and business strategy development.

Its’ pretty evident from the above analysis that KSCL isn’t any superior business and is subject to many controllable and uncontrollable risks. Though the management has been trying to reduce its dependence on cotton seeds, by developing alternate revenue streams, no significant progress has been made in maize, paddy, wheat etc.

In December 2015, M/ s. Sarath & Associates, Chartered Accountants, Hyderabad, were appointed by the SEBI for conducting forensic audit of the company’s books. The management had then issued a note specifying the company’s investments across various AMCs. The audit is currently in progress and the result/findings aren’t out yet. 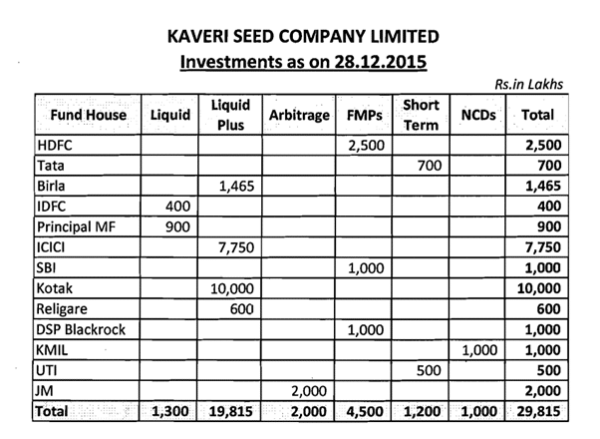 In the Q3 concall, the CFO had stated that this kind of an audit is a normal thing and nothing to worry about but an RTI, filed by a member of the valuepickr forum, revealed a different side. As per the response received from SEBI, this kind of a forensic audit was ordered on only two companies in the past 3 years, of which KSCL is one. Here is a snapshot of the reply given by SEBI to the RTI applicant. (RTI by Amit Mantri, thanks for that, Amit!) Bottomline : Visibility of growth seems to be missing. Multiple risks in the form of Government price regulation and relationship with MMBL, make it too complicated.

Disclosure: No position in the stock.