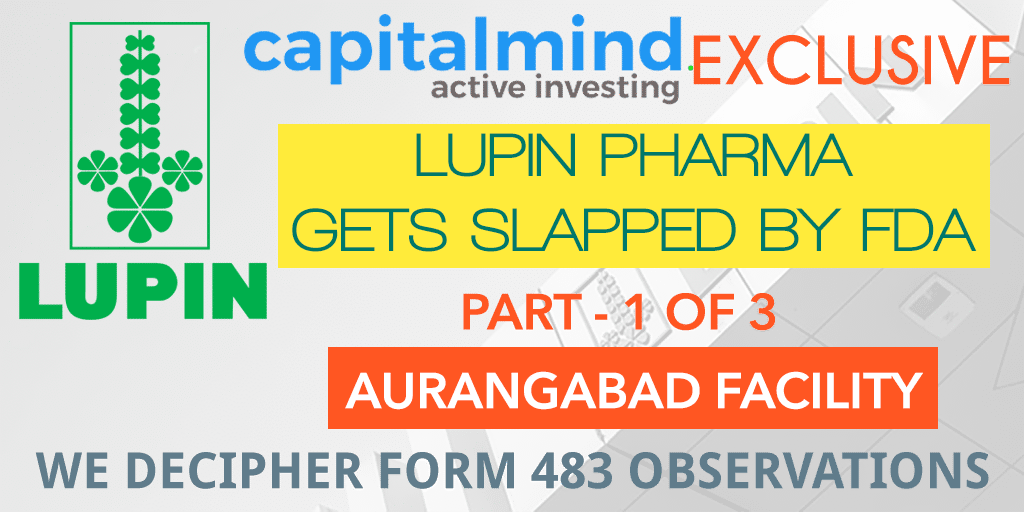 Welcome to the first of the 3 part exclusive unwrapping of the observations reported from the US FDA’s inspection of Lupin Pharmaceutical’s facilities. If you have directly jumped to this page, we would request you to read through the Introduction post before you proceed ahead. Though this is not mandatory, a good read is a good read only if read from front to last and not from the middle to the last.

Part 1 – Covering the FDA’s inspection of the Aurangabad facility which has both Manufacture and Packing operations. The facility does not have the permission to manufacture API’s.

Laboratory testing, which is required by the cGMP regulations is necessary to confirm that components, containers and closures, in-process materials, and finished products conform to the specifications established in drug applications. OOS or Out-of-Specification tests are performed on active pharmaceutical ingredients, in-process materials, and finished drug products that fall outside the specifications or acceptance criteria established in drug applications.

The company failed to perform a swab-recovery study on the equipment used in the manufacture of certain tablets which were then moved to another block for further processing. This means that the standard test method that the company has in place cannot confirm the effectiveness of the cleaning procedure performed in 2014 as a swab-recovery study was not performed. Inadequate cleaning procedures results in a number of contaminants present in future batches manufactured on the contaminated equipment.

Absence of sampling guidelines and ineffective sampling plans followed. The sampling plan defined by Lupin under its SOP was not followed. The tester identified parts of multiple equipment as sampling points (this is like sampling 10 random parts of 10 random laptops from an office of 100 resources without actually identifying the crucial parts that needs to be cleaned) to confirm to the “Cleaning Validation Protocol”.

A proper “Cleaning Validation Protocol” would include identification of all equipment along with their locations (this is simple since the accounting department would have all the list of assets along with their location, asset tag ID and the person who was issued and is authorized to use the equipment). This is a general practice followed by every organization that is well aware of external and internal auditor’s requirements of maintaining minimum standards with respect to quality of assets data.

While the initial inspection revealed that there was no scientific justification for the resampling performed, this time the investigators re-instated the same observations and added the fact that the company did not perform a RCA or root-cause analysis for reason behind incidents related to OSS or out-of-specifications.

Though the company had performed laboratory and manufacturing investigations, the real reason behind why the tablets failed release testing had not be identified by the company thereby impacting almost 12 products.

In addition to the above, the investigation also noticed non-adherence to the SOP i.e. the company failed to perform investigations or if they had actually performed any investigations, failed to document them as per the SOP. This was in relation to the laboratory incidences related to the HPLC and GC finished product tests.

High Performance Liquid Chromatography (HPLC) is a form of column chromatography that pumps a sample mixture or analyte in a solvent (known as the mobile phase) at high pressure through a column with chromatographic packing material (stationary phase).

Gas chromatography (GC) is a common type of chromatography used in analytical chemistry for separating and analysing compounds that can be vaporized without decomposition.

This is a major lapse on the company’s SOP wherein the drug product containers released by the quality control unit are not sample tested or an examination conducted i.e. the API and the excipients (An excipient is a natural or synthetic substance formulated alongside the active ingredient of a medication) were not tested prior to their release to the manufacturing team.

A scientific data for the sampling plan could not be provided leading to inadequate sampling method and sampling not representative of the complete population (number of batches, size of each batch etc.).

With this we end the first part of our 3 series posts. You can read the second part of the series here or directly jump to the final post.