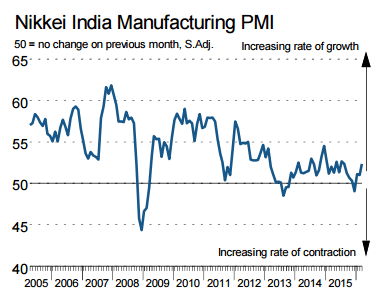 India’s Purchasing Manager’s Index for Manufacturing (by Markit) has gone up to an 8 month high at 52.4 – anything above 50 means expansion in production, whereas below 50 is contraction.

Apparently, there are some really good things happening:

Along with improved domestic demand, producers also recorded an increase in new export business. These positive developments encouraged companies to buy more inputs, but workforce numbers were left broadly unchanged. On the price front, cost inflation accelerated, while charges were raised to the greatest extent since November 2014.

Production growth accelerated to the fastest since August 2015, amid a stronger upturn in new business inflows. The latest expansion was widespread across the three monitored sub-sectors, with consumer goods posting the quickest rate of increase. March data highlighted a third successive monthly rise in order books, which panellists associated with improved demand from both domestic and external clients. New business inflows increased at a solid pace and one that was the most pronounced since last July. Growth of new export orders was sustained, but the rate of expansion remained slight.

All good for the markets and we seem to see a positive answer after the budget. The world economy too has improved too. Unless there’s some really bad news from Europe or Japan around the corner, we are likely to continue the party in the markets.