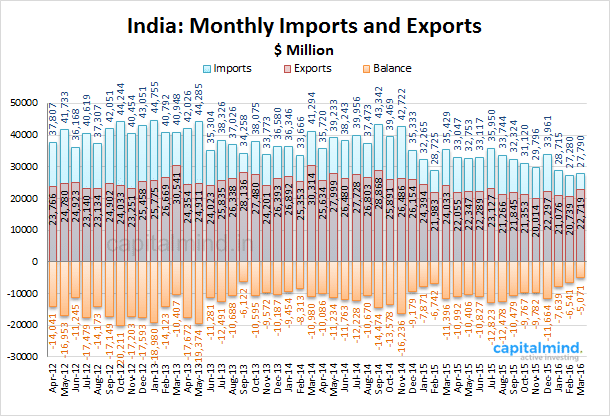 The whole trade situation continues to suck. I mean big time.
India’s merchandise (physical goods) trade deficit narrowed to the lowest in nearly 5 years, at a tiny $5 billion for the month of March. However, this is largely because of the sudden drop in Gold imports, as Jewellers were on strike for most of March. The budget in 2016 introduced a clause requiring jewellers to pay 1% excise duty and to require more documentation of gold buyers, which prompted them to shut shop. This has provided a big relief to imports as the rupee also gained from the temporarily lopsided merchandise trade balance. 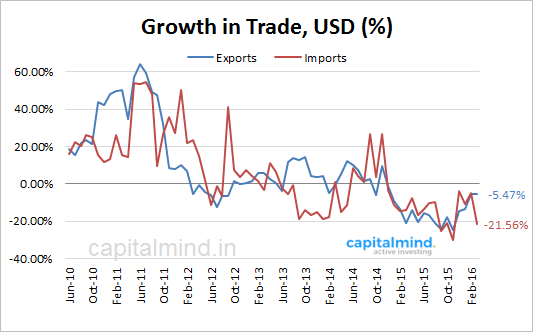 Gold imports have fallen 80% to $0.97 billion in March (Source: the Hindu) after a 34% drop in February (Economic Times). Are Indians losing their gold fascination? It’s too early to call, but a reduced rate of inflation, a potential success in the Gold Monetization and Gold Bond schemes and a falling price of Gold will change consumption patterns over time.

Exports look better this month. We take a look at Exports per Day, which is a better measure than total exports, since the number of days in each month is different. This time India’s exports per day fell to $733 million per day (from about $775 million per day in March 2015). This is still a fall of 5.5% but it’s a smaller fall than earlier, and the raw numbers on a month-on-month basis seem to be showing a recovery. 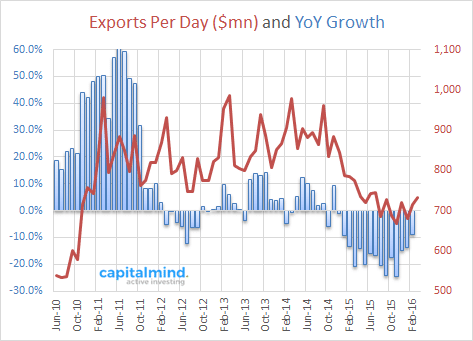 But Services Show A SlowDown

We are net importers in Merchandise, but net exporters in Services. Most of Service Exports are Computer Software and IT. But here, the trade balance has fallen substantially, to the lowest in two years: 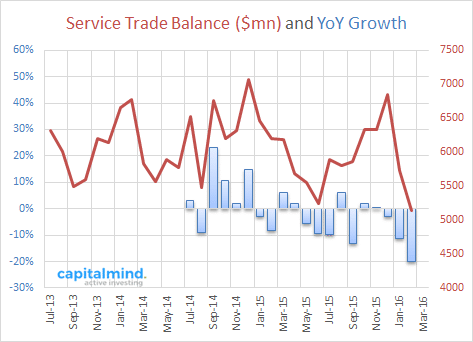 Service Exports fell 20% year on year, which is a cause for concern.
Here’s what we think about this data: