Cement is a key ingredient in the development of the economy as it is indispensable for nation building and has a direct linkage with the nation’s health and growth. It is also evolving from a mere commodity into a branded product.

The demand for cement is strongly correlated to the rate of economic development and it gets adversely affected due to the slowdown in economic and infrastructure development activities. With a capacity of nearly 400 million tonnes, India is the second largest cement producer in the world.

India’s cement industry is a vital part of the economy, providing employment to more than a million people. The domestic cement sector is the second largest market, globally and contributes 8% to the global cement production.

Land, limestone and coal are the basic inputs for manufacturing cement and any increase in their prices adversely affects the profit margins of the industry.

Availability of mining land for limestone is a rising concern as it requires huge capital expenditures. Fuel – another key component of the cement industry cost structure which the industry benefited from due to the decline in crude oil prices.

With cement manufacturing requiring large quantities of coal to meet its kiln and captive power generation needs, consistent supply of this fuel at reasonable and stable prices remains a key area of concern for the Industry.

The Price of cement varies throughout the country based on the quality of the finished products and the distance between the quarry-factory-end customer as logistics plays an important role in the final end.

Currently a government portal has been setup which discloses the price of cement based on every manufacturer plant location which is used as the benchmark wholesale prices for any buyer who can register and place an order immediately. These prices are quite lower compared to the retail prices available for the end consumers in the Indian market.

Here is a snapshot of the Cement Companies along with the prices of cement: (click on the image for a more detailed one) 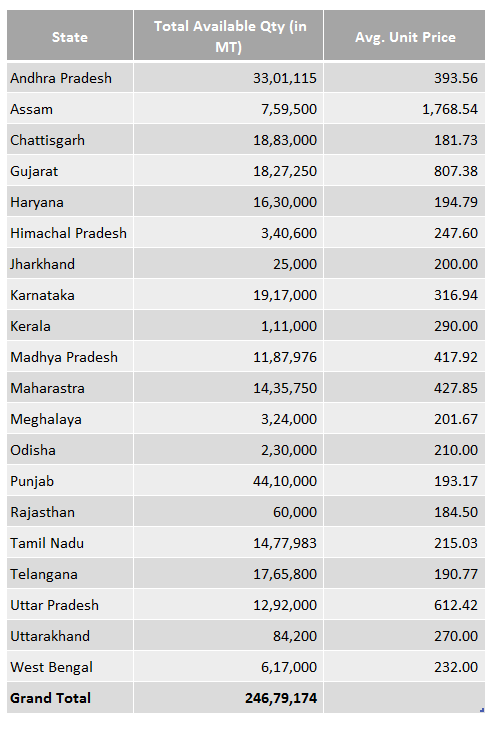 The cement market in India is expected to grow at a compounded annual growth rate (CAGR) of 8.96% during the period 2014-19. According to CII, the annual cement demand will reach 550-600 million tonnes by 2025.

Cement demand has remained weak primarily due to low consumption from end-user sectors (including rural demand due to sub-par monsoon), procedural delays in clearances for industrial and infrastructure projects (initiatives for concretization of the roads and introduction of Bharat Mala project involving construction of 5300 Km road), weak government spending in infra projects (expected to gain traction with the Government allowing mobilisation of funds in real estate through approving listing of REITs), legacy and sector specific issues (increase in royalty by 30% with the introduction of Mines and Minerals Development Regulation ordinance).

Chart “Cement Capacity & Production” shows the current installed v/s actual production capacity at the top companies. On the backdrop of “Make in India” and other infrastructure projects, the Industry has created a lot of capacity with an average production of 63%

Chart “Cement Production and YoY Growth” shows the overall production of cement throughout the country for the past 10 years. During the previous year i.e. 2015, the Industry witnessed a better positive growth only in the months of August at +5.07% and October at +11.52%. 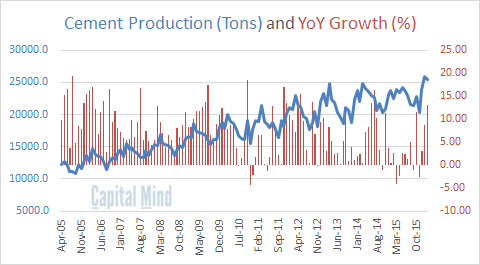 Moreover, the cement industry is confronting excess capacity resulting in lower capacity utilization. The lower capacity utilization is due to the excess capacity created on the back of government’s projection of potential cement demand arising out of the thrust given for infrastructure development like Make in India, Housing for all by 2022 (entails the construction of 40 million houses in rural areas and 20 million houses in urban areas), creation of 100 smart cities, and roads concretisation program (roads account for the highest cement consumption under the infrastructure segments and an estimated 7,037 kilometres of road during the year is slated to be constructed by the infrastructure industry during 2015-16).

Other hindrances to the growth of the sector include high taxes and administrative burden, stringent pollution control norms and regulations covering land acquisition and clearances for mining, shortage of railway wagons and transit delays affect plant operations including service to customers.

Here are the Top 12 companies by Market Capitalization. 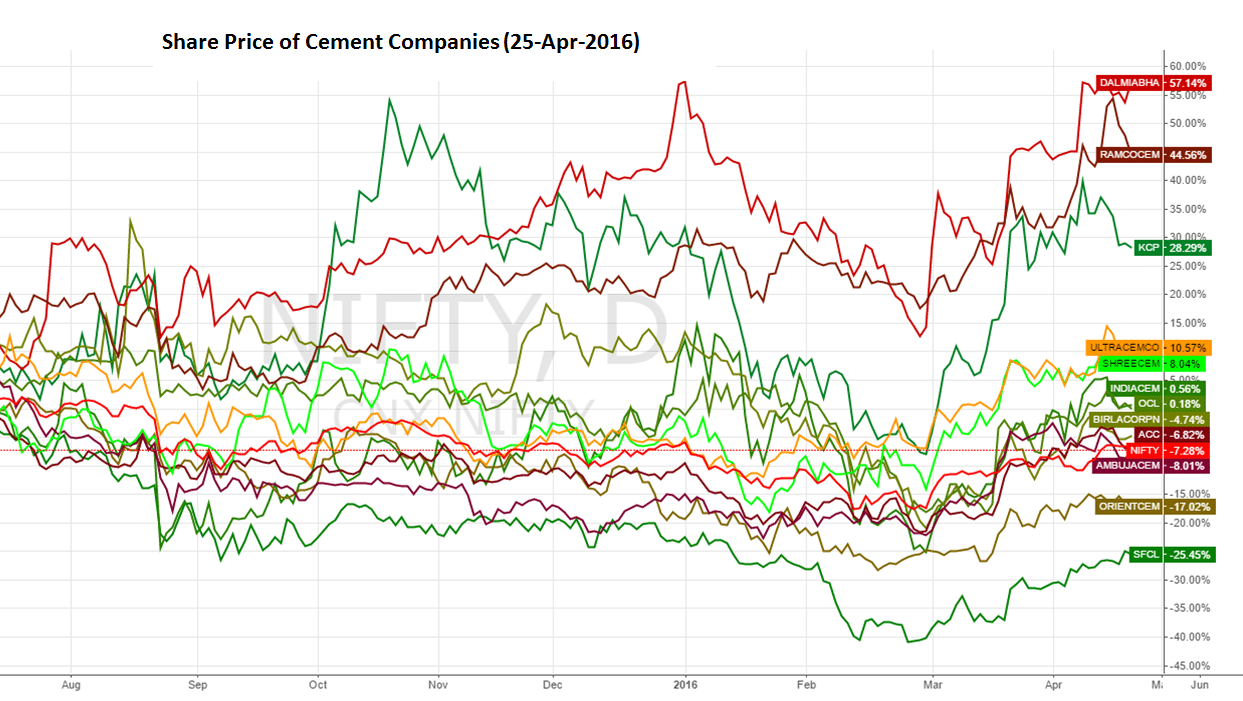 Construction material is critical for meeting the society’s need for housing and infrastructure. Consumption could pick up well beyond 6% if investments in infrastructure development and Urban Transformation (AMRUT), and Housing for All (including low cost housing) are accelerated. Demand in the housing sector may be stimulated with a gradual reduction in interest rates, wider supply of disposable incomes and household savings.

Capacity utilization would gradually come down on account of the mismatch in capacity addition and demand. Growth in infrastructure activities is also expected to fuel cement consumption on account of investment in infra projects like freight corridors (Western and Eastern), railways, smart cities, metro railways, roads and highways, among others.

We are looking to add Cement companies to our Long-Term/Medium-Term portfolios as we get more clarity. More on that in a separate post.