Our last set of articles on Uber and Ola got some serious attention – the Economics of Using Uber in India and the Counter Arguments.

Since then things have seen sudden changes: 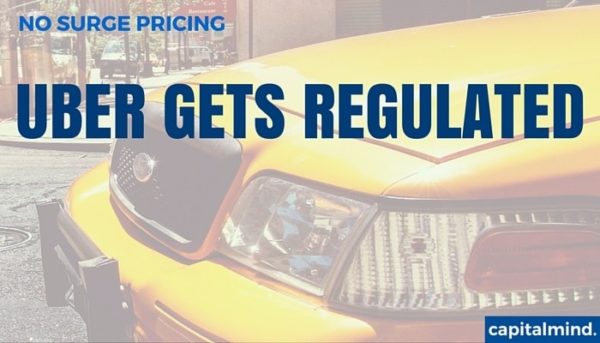 The Surge Deal: It Doesn’t Really Work in India To Bring Out More Cars

The idea of Surge pricing was that if there aren’t enough cars on the road, increasing prices will attract drivers.

It doesn’t work like that in India. The rest of this section is pieced together from Uber drivers I’ve had good conversations with over the last few months.

In India both Uber and Ola “guarantee” certain incentives for drivers. Do 15 rides, we pay you Rs. 3000 extra as an incentive. Do 20 rides and you get Rs. 5000 etc. (The numbers change every week)

Notice that Uber has paid Rs. 3000 extra beyond what you’ve paid, but taken back 25% of the total, which was Rs. 1125. So they net paid our Rs. 1775, in this example, from their pocket. Why would Uber lose money on every single day? Because they can.

And the net calculation still works out for him to be the exact same – Rs. 3375 for the day. The only person that benefits is Uber – it tends to lose less when it applies Surge pricing than otherwise. (It still doesn’t make money but that’s not a bad thing nowadays)

The driver gets no benefit of the surge (but he would if the surge actually goes beyond the guarantee – though that’s a far cry). So to a driver, surge or no surge, he gets the amount he’s guaranteed, so he’s fine.

Therefore drivers don’t actually like to be in an area where there is a surge.  Because people hate to book cabs in surge times, and drivers don’t get anything extra, but they have to keep waiting! And they risk the loss of the 15 ride minimum they have to make every day. But Uber’s algorithm creates surge pricing in almost every single area at the same time – so drivers just stay put if they can’t find a no-surge area nearby.

So Surge Pricing doesn’t really bring out drivers – and this is also why you might find yourself with a number of Uber cars around you, parked and empty, and yet, you see that 3.6x surge that refuses to go down.

Note: This concept has changed over time and is probably going to change further but this is how I understand the billing based on conversations I’ve had.

Update: Uber  Delhi has stated on twitter that Uber maintains incentives separately from surge. I’m not sure how to read the rest of the tweet where incentive structures are different – and my conversations with drivers recently has me convinced that they believe surge doesn’t come to them at all.

@deepakshenoy @satish_49 @r0h1n it still is! Partners across India are on different incentive structures, but surge is always passed on

Other people have said Ola doesn’t pass the surge on, but Uber does. Yet others have said Delhi drivers have confirmed they get the surge separate from the incentive, but people in Bangalore have tweeted that Bangalore drivers don’t make the surge. So it could vary from city to city, or from provider to provider. (Note: I only have feedback from multiple drivers, so take all opinions as such)

As we’ve noticed, removing surge pricing only hurts the cab aggregators. Not the drivers. Because the drivers get their payout no matter what.

The maximum you can charge in Karnataka is about Rs. 25 per km (at night) and about Rs. 20 per km in the day. A “Surge” price of even 1.5x takes the total cost up higher than the maximum!

This is probably why the Karnataka Govt has stopped this. In general, if people are angry that the government is trying to dictate prices, please remember that public service prices are usually regulated to an upper limit, and even Airlines have been stopped from charging over certain approved fares. Mutual fund commissions are regulated. The amount a broker can charge is regulated (upper limit). The idea here is that when you have a large population that potentially depends on you, the way for the regulator to build trust is to create frameworks where one doesn’t feel cheated – otherwise as a public they will cry for larger regulation, and in India, they will get it. While this may not be great for a person who thinks a sucker and his money should be parted, or that the buyer beware philosophy must prevail, the larger fact is that such situations create a massive trust deficit because you know that people cheat you all the time.

Sure the alternatives are not much better – like autos, who won’t even come in the direction you want to go. And you still have the ability to take a Meru or a full service cab. But then, since there are upper limits on those fares, there should be upper limits on the Uber/Ola fares too – just level the playing field a little more.

Fixing it:
Charge the Maximum, But Offer Discounts Through The Day

Uber can still charge you a surge – just not as high as they currently offer. They can offer you the ride at Rs. 25 per kilometer and at “good” times, offer a discount of 50%, taking your cost down to Rs. 12.5 per kilometer. As the demand goes up, the discounts can come down.

It’s still a surge, but the government will like it better.

Oh, and for the math, Uber and Ola will still lose money, but hey, that’s fashionable nowadays. They might make the profit grade if they hit extreme scale and are able to cut driver incentives. This is a tough ask, but like Ravi Shastri says, the game is on and all three results are possible.

Disclosure: I Still Use Uber/Ola, But A Lot Lesser

At a personal level, I’ve started to use my car much more – I was almost completely on Uber. Because:

Uber and Ola are useful to drive into the city where parking is a pain, for trips after a pub visit or when I need to have relatives travel (where I can book and pay). So for that I would love to see these companies continue to make things available for me, and I would happily take other public transport as well.

Please take a minute and answer the poll – Share your opinion with us. You can choose more than one option from below.

Counter Arguments On Uber Economics: What About The Cost of Owning a Car, And Other Deeply Insightful Questions

Ola & Uber Raised More Money in 2014 That all the IPOs in India! We Tell You how These Companies Work