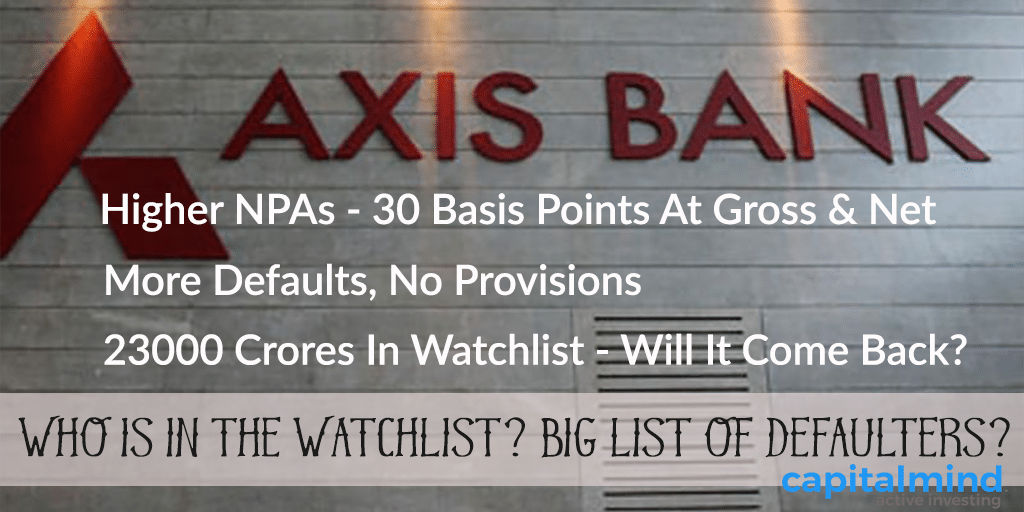 Axis Bank has revealed in its results today that seem shocking. For one, their profit fell for the quarter – a decline of about 1% year on year. For the full year, they were able to show a growth of 12% on EPS though, but much of that is because of the previous quarters.

What’s changed? The massive increase in provisions.
They saw much higher NPAs – about 30 basis points more at both the gross and the net levels. The increase in both levels means that they saw more defaults, and then didn’t provision so much for them. (Net NPAs are Gross NPAs minus provisions, roughly)

Now this is 13% of Axis Bank’s total corporate loan book. (It’s only 4% of its total assets, and that’s a small relief, but still) 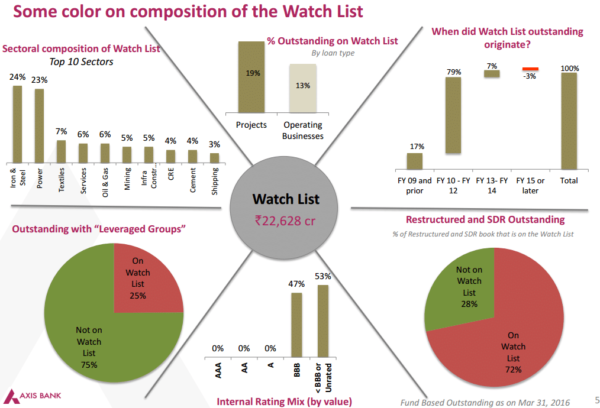 As you can see, this is largely about Iron and Steel and then, Power and Textiles.
Most of these loans were given in 2010 to 2012.
72% of their restructured accounts are on the watch list.
They expect 60% of the watch list – about Rs. 13,500 cr. to flow in as NPAs in the next two years. To give you context, their current Gross NPA level is Rs. 6088 cr. They might actually see their NPA Level TRIPLE over the next 8 quarters.
They will reveal more information every quarter:

This is good disclosure. But the scale of this stress has not been otherwise known, and it’s possible that other banks too should have such an internal watch list they aren’t telling us about. Banks like ICICI (who reveals results this Saturday) and SBI will probably have more negative surprises.
We don’t know who’s in the watch list. But we will soon see a big list of defaulters, as the list seems to have been leaked to the press. And then it’s going to be conjecture.
India’s debt issues are just starting, but it’s actually good to see them hit the system – you can’t get better until you acknowledge the problem.