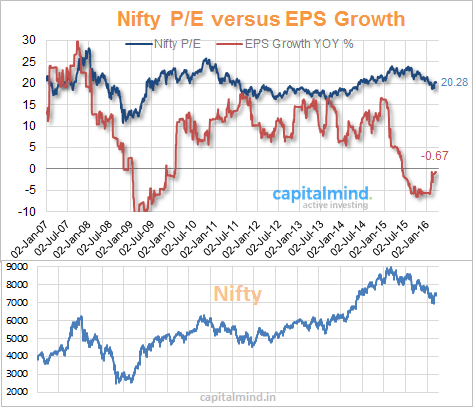 The P/E ratio of the CNX 500 shows that we’re still overstretched on valuation. The broad index has a P/E of 22, and that’s quite high consider it has seen an earnings growth that is -2.24%! 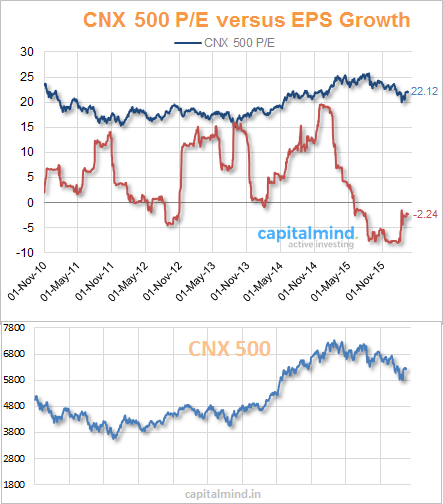 While markets don’t always tend to correct with the P/E as a benchmark, it is a useful barometer to understand what valuation you are paying, with respect to earnings growth. Many will tell you that oh, last year was bad, this year will be better, so earnings growth will be positive.

But earlier, in December 2014 or Jan 2015, no one through that the trailing 15% earnings growth we saw would fall down to a negative 9% number in a year. In fact, we paid a 25 P/E then, assuming that the 15% earnings growth would grow to 25% or something. That assumption was wrong, and it’s equally likely that today, any thought process behind a 20% earnings growth next year will also be wrong. In fact, you might see an earnings growth of 15%, but the P/E itself could drop to 15 – which entails a 22% drop in the index next year!

The Nifty: At P/E of 20, but horrible earnings growth

Due to some changes in the Nifty, the EPS growth has risen recently. But it is still at an abysmal -0.67% over a year back.

Ok, brother. But explain this: 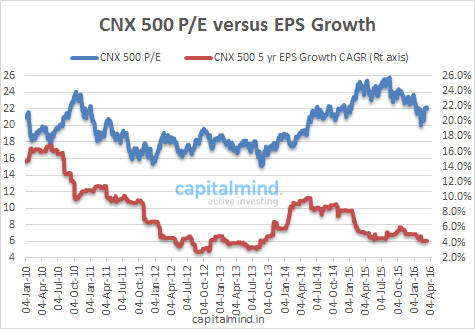 This is abysmal. Our broadest index is the 500 stock index that’s the CNX 500 (whose new name is the Nifty 500, but I avoid that name for its confusion)

And that very index has seen EPS growth – as a five year compounded rate – going from 18% to as low as 2% (over five years CAGR). And today, it’s at  just 4% CAGR. In effect, earnings growth is much lesser than inflation.

If there’s one thing that we should be careful about when we say that India stands out as a growth story, please look at the above chart and come back down to earth.