Earlier in February 2016, when the government announced the FY16 Budget, a lot of noise was raised regarding one particular focus – interest rates.

There was plenty of furore created as Jaitley first decided to normalize EPF investments by taxing the funds at exit (in my view, this was a step in the right direction. Considering our financial markets have to develop as the years go on, providing a risk-less extra return on one asset class heavily distorts people’s investment objectives). Of course, he has since retracted those moves amid much public angst and show of dissent. What about the other measure?

We are of course, referring to linking the rates on Small Savings (SS) Schemes, to the market rates. The Finance Ministry announced some radical measures around the rates that various Small Savings Schemes currently offer.

Update from Finmin: PPF Is Not Taxable, But EPF Corpus is Taxable at Exit And More

The products that are colloquially referred to as Small Savings Schemes include:

The main reason why the Ministry is taking such a move, is to enable the easy transmission of rate cuts by the RBI, through to the consumers via banks. Banks are claiming that the attractiveness of these SS schemes, reduces the competitiveness of their interest-bearing products, as customers prefer to move to these smaller schemes where returns are higher. Apparently, the issue of the schemes’ higher interest rates having an impact on monetary transmission had been raised by the RBI with the government. Banks had also raised the issue at the pre-budget consultations held with finance minister Arun Jaitley.

Based on the latest revision (18th March, Ministry of Finance), the rates for some of these schemes have been altered (some way more than others) effective April 2016. The rates would get revised every quarter based on G-sec yields of comparable maturities for the previous 3 months.

As per information from the RBI, at the end of August 2015 deposits under all the savings schemes put together, totaled INR 6.41 lakh cr. This included funds allocated towards Deposits, Certificates and the Public Provident Fund (PPF) schemes. 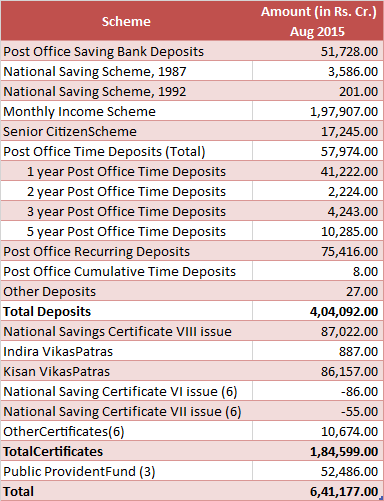 Of these, the schemes that have seen revised rates as of the latest announcement are: 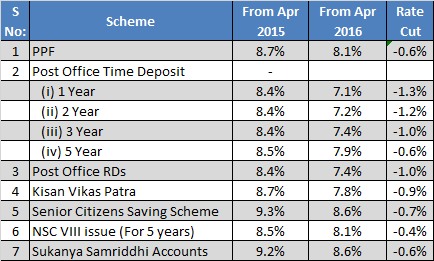 How Will This Aid the FinMin?

Now the RBI releases lagged data on the amount outstanding under each of these schemes. The latest data is as of August 2015 (I’m still wondering why the near 7-month delay). Based on this data, and the rate cuts for each of the schemes, we can arrive at a rough estimate of the savings accrued to the govt. coffers: 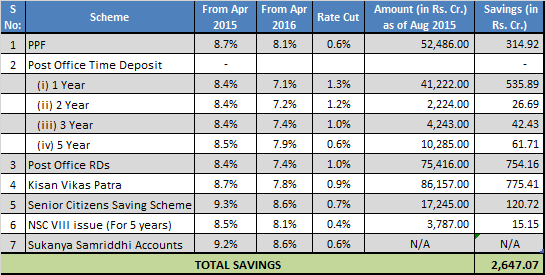 P.S. These rates are all annual rates. However, the rates are rest quarterly. In order to ease calculations, we have made the simplifying assumption that these rates will remain constant for the whole year, and hence the rate cut( in % points), will be the same throughout the year.

As per protocol, the government intends to reset these rates every quarter to benchmark them against G-secs of comparable maturities, providing an additional spread for each scheme. There is no doubt about it – we are going to have reduced expenses because of this exercise. But at just Rs. 2,600 cr. per year. we believe that the resetting of interest rates will spur on the active risk-seeker to look for other avenues of investment where he can get higher returns. For the maverick fixed-income chaser, this could be solid corporate bonds and the likes.

At Capital Mind, we have recently started a series of posts, videos and educational content exclusively for our Premium subscribers, on the merits of Fixed-Income securities – the What the How and the Why. These tutorials help you understand the nuances of bonds, while giving you a clearer picture on how to buy them. Bonds can be phenomenally worthwhile if you understand how they work.

The bottom line: Don’t invest because of the tax saving based on existing tax regimes. The government can change on you and can change fast. Your money will be at stake.