India’s losing its love from Indians abroad: Deposits from NRIs and remittances from Indians abroad have reached multi-year lows in the December quarter. But foreign investors are warming up to investing directly in companies even as they walk away from public markets. Here’s our view of the RBI Transaction Data in the Balance of Payments (how boring a phrase!).

Check out: What is the Balance of Payments?

But we’ll make it easier for you to understand.

Non Resident Indians Not Quite As Enthusiastic About India

Non-Resident Indians (NRIs) usually give money to India in multiple ways, but by and large the biggest thing they do is thulp a massive amount of “remittances” back to India every month. India has been the highest receiver of non-resident remittances – defined by the concept that the money is sent home and doesn’t need to be returned – in the world. But that claim might be fading, as remittances fall to a level not seen in five years: 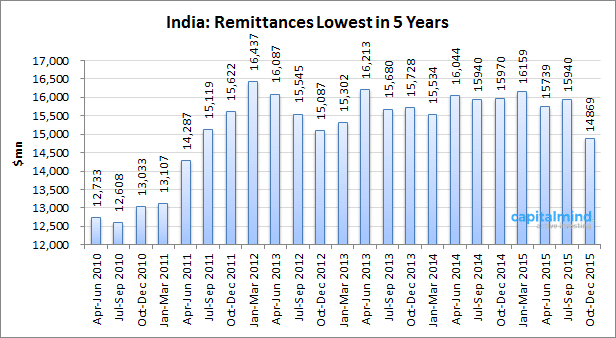 This might be an aftermath of the Gulf crisis. With the drop in crude prices, people in the Arab Gulf don’t have the same levels of income and it’s well known that Indians form a large part of the labour in these countries. Without jobs or with the fear of losing jobs, Indians resident in these areas might have a reduced amount of money to ship back home.

And then, you have the second big thing: NRI deposits. As non-residents, Indians get a slew of good features for deposits – from interesting Foreign Currency Deposit rates to the ability to invest in rupee deposits that they can use when they (eventually) come back home. That NRI deposit number has fallen – to the lowest in 18 quarters! 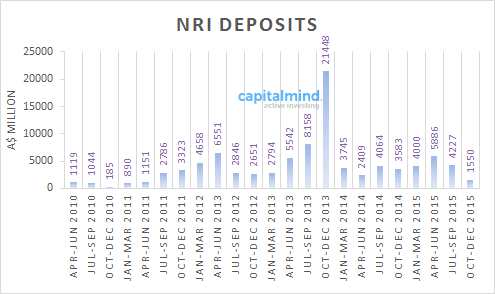 This could be due to the relatively unattractive rates in India compared to the depreciation of the currency. FCNR (dollar deposit) rates are probably less than most other countries now, due to high hedging costs for banks (they pay 6% to hedge the USDINR for a year). And rupee rates are hit by depreciation of the currency – so if they deposited in Dec 2014 when the rupee was 63 to the dollar, the Rupee fell to 66+ in Dec 2015, wiping out about 5% returns in dollar terms. For an 8% deposit, that’s just 3% in dollar terms which is unattractive (and in fact if they waited till January when the rupee hit 68, all interest gains were wiped out).

Expect this to continue as rupee rates continue to fall for deposits. And the Gulf thing isn’t going to get any better.

Foreign Portfolio Flows Fall for the Third Quarter in a Row

Foreign investors have been slowly exiting debt and equity markets. This data has been suddenly revised – we don’t know why – and past data was corrected massively. We present it in a chart – these are three quarters of negative net flows. 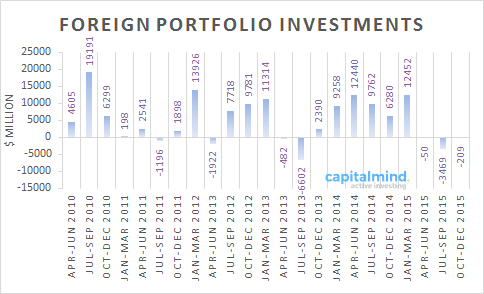 The recent surge in markets sounds like they are back with a bang, but they are not, really. In Jan to March 22, 2016, the net investment is still negative, at -8,000 crores. (This is after a Rs. 14,000 cr. net positive investment in March alone, so they went “deeply” negative before that)

Why do you think the Modi government loves startups? Because they bring in the FDI moolah. All those guys getting big ticket investments count as FDI – or direct investment into companies. This money is huge this quarter. How Huge? This is the highest level ever in any quarter – $14 billion.

That means India’s changing, and changing fast. But a bust in the startup bubble could make a serious dent into these flows. Note however that any purchase of stake by large insurance companies (who have upped their stake in their partner companies recently) will also count as FDI, so we can expect a short-term offset.

While the data is great – India’s Current Account Deficit is only $7.7 billion, a very manageable figure – the source of its financing is starting to move. From portfolio flows into equity and debt markets, the FDI area is seeing more attention, even as we lose NRI interest in deposits and remittances. It would of course be better if we just managed to export more – but as the data shows, we are just importing less instead, due to lower crude and gold prices. This is shaky – and gives us only temporary relief – especially if as it seems, the startup ecosystem sees a major correction. Already, the holes in the import-export situation mean that the rupee has fallen by over 5% in a year; unless we get back the portfolio flows of earlier, we will just see more rupee depreciation to finance the deficit.