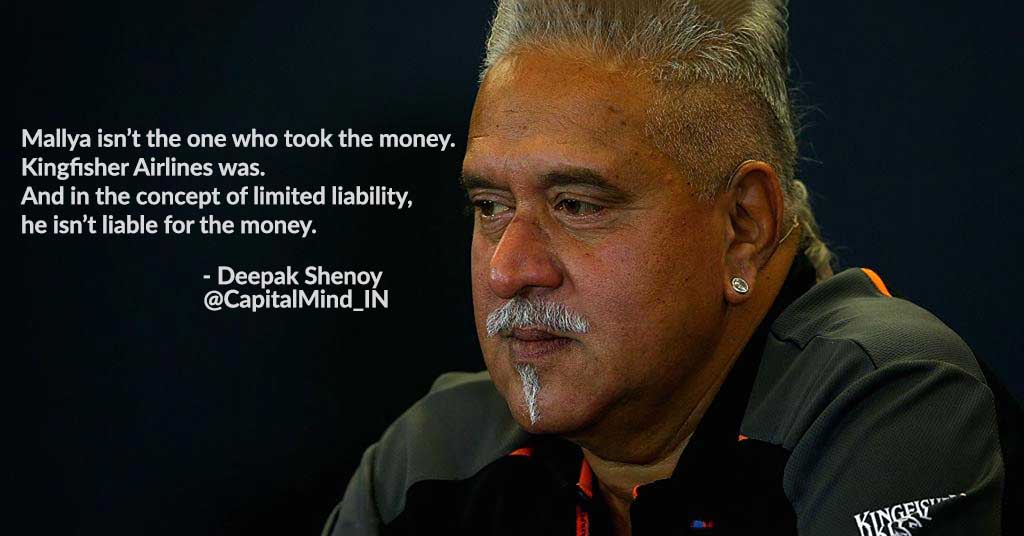 The Mallya controversy never ends. After the death of Kingfisher Airlines in 2012, the banks that needed to get paid a massive amount of money seem to have woken up. The money they are owed is apparently more than 7,500 crore rupees. The problem? There is nothing in the airline. The planes were rented, the offices were rented, you can’t own people, and the operations were simply dependent on a license that was taken away in 2012.

In 2016, a flurry of activity has brought focus back on Vijay Mallya, the flamboyant owner of the airline, because he celebrated his birthday in a big way, continues to own and sponsor cricket teams, and was the face of Brand Kingfisher, a beer brand famous across the country. Just recently, his flagship company, United Spirits Limited, was bought by Diageo, who discovered weird large loans to other UB group companies (controlled by Mallya) that had no reasonable explanation. In February, USL decided to kick Mallya out of the board, paying him $75 million as a non-compete fee, and would withdraw all repurcussions on money lent to UB group companies.

This would be a good thing, except: Kingfisher Airlines’ loans have been guaranteed, apparently by Mallya and by UB Holdings. We know this from a recent SBI Auction Notice: 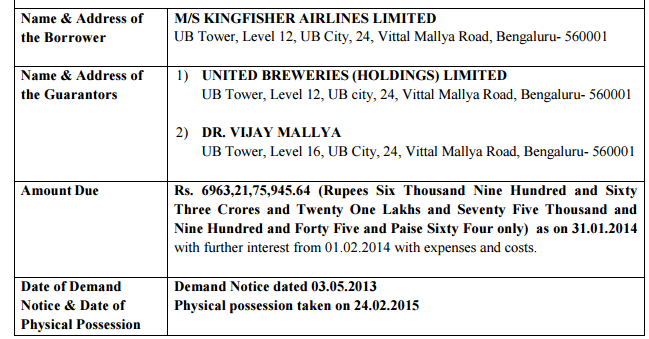 So the loans of Kingfisher were guaranteed by UB Holdings – a listed company – and Vijay Mallya. Mallya is now listed as a “wilful defaulter” by some banks, and he has challenged this label from United Bank of India (though other banks have also called him that).

What follows here is my view of this exercise.

Mallya isn’t the one who took the money. Kingfisher Airlines was. And in the concept of limited liability he isn’t liable for the money. There is one exception – if there is fraud, like in the NSEL-FT case, where the limited liability veil can be lifted if the fraud was conducted in connivance with the promoter. In this case there is no case of “fraud” against Mallya – even the labour ministry, which tracked the PF submissions, seem to have said the company had met its obligations.

Mallya only has to repay because he gave a personal guarantee for his loans. The law doesn’t allow “summary” attachment of a guarantors assets. The banks apparently got a list of assets that amounted to Rs. 1,500 crores. They attached what they could – the Kingfisher house, a villa in Goa and so on. But for the rest they have to go through courts – and while some say they have, I believe the fault here lies with the banks for not attempting to enforce guarantees fast enough.

There isn’t any law that prevents banks from actually taking securities as collateral. And many do. So why didn’t banks take Mallya’s 52 lakh shares in the listed company, UB Holdings (market price: Rs. 18), and the 2.13 crore shares of the listed United Breweries (Market price: Rs. 802) as collateral? Mallya’s 2 crore shares in UB Holdings are already pledged – we don’t know which bank has them. Why isn’t that bank – whoever it is – selling those shares and recovering money? Remember – you don’t even have to go to a court to sell these shares if they are pledged to you. Yet, they don’t. Are we going to blame Mallya, or shine a torch on the face of the bankers who have been sleeping?

And then: the second guarantor for the above loan, at least, is the listed UB Holdings Ltd. This is a listed company with assets. You can proceed much faster against a listed company in a court. And yet, the banks haven’t progressed much there. Why not clean up UB Holdings? It owns about Rs. 4,000 cr. worth of shares (United Breweries and United Spirits alone) and about 1,000 cr. of fixed assets. All they seem to have got is a villa that UB Holdings owns in Goa, and nothing else. They didn’t even get the shares pledged to them. Why would a banker not do that? Why take a personal guarantee of a company and not make shares pledged against the loan?

The answer seems to be: Political pressure. I call BS. Banks don’t lend such large amounts on pressure – they lend through bribes, as we have seen in the Bhushan steel case, but after a smart CAG, they don’t really have to lend to any company under pressure. Bankers can always get written orders if they need to protect themselves. And if we let bankers go with this excuse, we’ll never really make banking better – they’ll always hide behind the word “pressure”.

Only SBI among all the bankers seem to have understood the situation enough to file multiple cases and to seize property. And even that isn’t enough. As much as I feel Mallya should honour his personal guarantee, it’s also silly of banks to have asked for one without attaching his assets. Taking someone’s word for it is not feasible in this country – can you believe that a bank will let you or me say “okay, don’t worry, we’ll pay” work as a guarantee? Even for educational loans for children that are guaranteed by parents, banks demand to take a property as collateral. Why did they spare Mallya? Don’t give me the pressure bullshit.

Mallya is an NRI and lives at least six months a year outside India. His leaving is no big deal. And he may return too, after the brouhaha dies, or worse, if a court rules that his personal guarantee is invalid. Which, by the way, has happened – many high courts have ruled that a personal guarantee for a loan taken by a corporate entity may not be enforceable. After all the person giving the guarantee didn’t get the money, the company did.

This is not a post about stocks, just an opinion.

Disclosure: I own a few shares of United Spirits. Not that it matters, because it’s owned by Diageo now and Mallya’s off the board.