Periodically, AMFI releases a wonderful package of data concerning Mutual Funds. This includes AUM data, net inflows and outflows each month, Commissions data and so on. What they also do, is give out information regarding the different categories of MFs and the types of investors. Based on this information, we can get some insights into, for example; how have Retail investors reacted to the Budget vis-a-vis Mutual Fund entries or redemptions? Or where have FIIs pumped most of their money? Or is there more money lying around in Income MFs as compared to Equity MFs?

Let’s check out the Industry and the performances of various types of Mutual Funds over the last 12 months, starting March 2015. 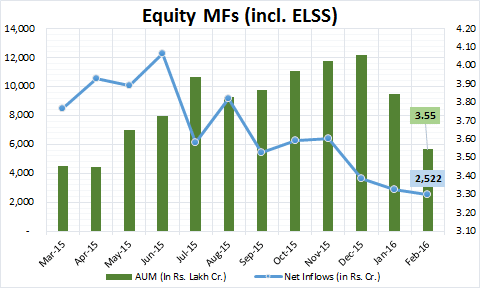 Equity Mutual Funds are those that invest principally in stocks. For the sake of analysis here, we have combined pure Equity MFs with the tax-advantaged ELSS (Equity-linked Savings Scheme). For February 2016, pure Equity MFs registered INR 1,634 cr. inflows and ELSSs registered a net Inflow of INR 888 cr.

Inflows into all Equity MFs combined, fell for the 3rd straight month, as February 2016 registered a net Inflow of INR 2,522 cr. This was well short of the INR 12,273 cr. inflows that were witnessed in the month June 2015. Now the effect of the Budget on investors’ confidence in the markets will be more visible to us from March onwards, but the data so far has disappointed.
For the sake of analysis here, we have combined Equity MFs with the tax-advantaged ELSS (Equity-linked Savings Scheme). For February 2016, pure Equity MFs registered INR 1,634 cr. inflows and ELSSs registered a net Inflow of INR 888 cr.

The Assets Under Management have recorded an even steeper decline in the opening months of the year. AUM for Equity MFs currently stand at INR 3.55 lakh cr. (trillion). That is a decline of 12.56% from its year-end close value of INR 4.06 lakh cr. This is despite the schemes receiving consistent inflows, which evidently reflects poor performance of the underlying assets.

An Income Mutual Fund is a special type of MF which focuses on generating current income as opposed to capital appreciation. Their assets include corporate bonds, G-secs and even dividend-paying stocks. Since bonds are a considerable part of the assets here, AUMs fall and rise with changes in interest rates.

We have included money apportioned to ‘Gilts’ in this category as well. Gilt Funds primarily invest in Government Securities of varying maturities. 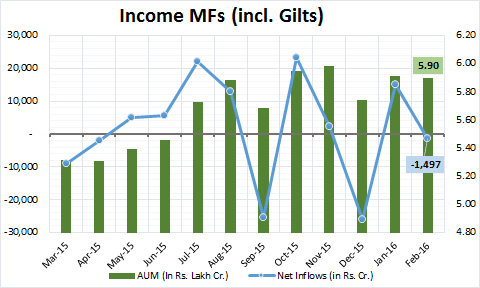 AUM under Income MFs currently stand at INR 5.9 lakh cr. This is in the upper ranges of what has been seen over the last 12 months, with only 3 months of the preceding 12, registering higher AUM values.

Money Market Mutual Funds are those funds that invest in bonds of a shorter-term maturity. These include T-bills, corporate bonds, debentures and the likes. The assets invested in by these schemes are subject to 3 main risks:

ETF Mutual Funds are a kind of passively managed portfolios that are intended to track the performance of some index or the other. As a result, their returns are the ones that most closely mimic the overall market return. We have included Gold ETFs under this purview as well. 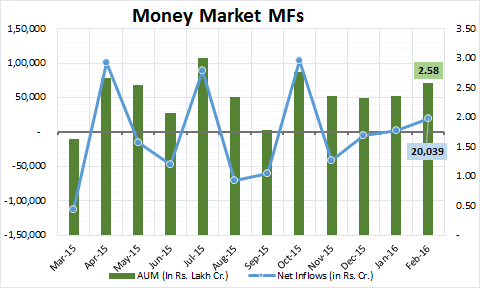 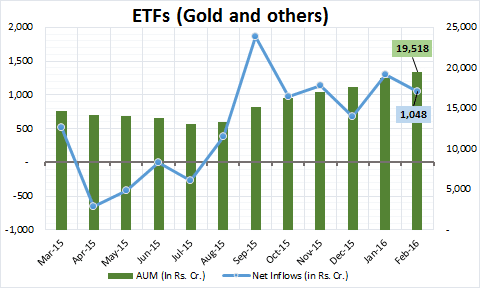 In February 2016, Money Market Mutual Funds continued their surge upwards, as they recorded a 4th consecutive month of increasing inflows (or reducing outflows). There was an influx of a fresh INR 20,039 cr. worth of funds. This was in fact, the class of Mutual Funds that attracted the highest inflows in February.

ETFs have witnessed positive inflows for 7 straight months now, culminating in a Net Inflow of INR 1,048 cr. in February. However, Gold ETFs continue to register Outflows; a trend that has been going on since March 2015.

AUMs for Money Market Mutual Funds have just risen in February to INR 2.58 lakh cr. after 3 months of near-stationary results.

Slipping quietly under the radar, ETFs have seen their AUMs rise consistently since July 2015. February ended with an AUM value of INR 19,518 cr. – the highest in the last 12 months! Quite a study in contrasts.

Overall, AUMs of all Mutual Funds have fallen again to INR 12.95 lakh cr. 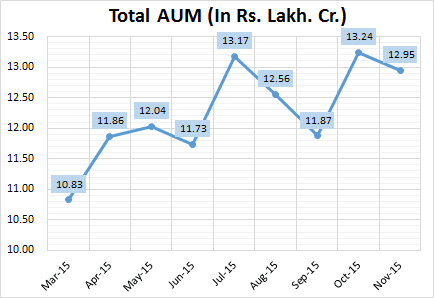 The last couple of months have not been easy for the investor. There were manifold fears surrounding assets’ performance – be it global economic stagnation, continuing quarters of shoddy corporate results, terrible banking balance sheets among others. However, markets have been rebounding since after the FinMin presented his Budget on February 29th this year. Renewed investor confidence could possibly be evinced by a rise in inflows into Mutual Funds as a way of participating in the growth story. However, could certain new taxation policies raised in the Budget (10% Dividend Distribution Tax, for eg) have a negative effect on interest in Mutual Funds?

We will wait for the March data to see how the investment community has responded. We will continue this series on Mutual Fund performance with a deeper look at how different kinds of investors – Retail, HNI, FIIs etc. – have allocated funds across the Mutual Fund spectrum.