Ever since the Finance Ministry announced Taxation of Dividends Received (Above INR 10 lakh) in the Budget 2016, companies have been lining up furiously to reward their share-holders before April 01. This is the date from which any Individual or HUF receiving dividends greater than INR 10 lakh, would have to pay 10% Dividend Distribution Tax. Read our short post on the Introduction of Dividend Distribution Tax.

As a result, there has been a slew of corporate board meetings as companies scramble to figure out how much they should distribute to share-holders, while keeping in mind, the deadline of March 31. Keep in mind, this is mainly for the benefit of Promoters and Big Individuals, likely to receive more than INR 10 lakh on account of their ownership positions,  who would want to take the cash now rather than after April. These investors are the ones generally who take home a lion’s share of the dividend and they do not like to share this extra topping with the government.

We have created a Dividend Tracker, which we update at the end of every day so as to capture two sets of information:

You can visit this Dividend Tracker page to keep a lookout for your invested companies declaring dividends.

Here are the list of posts where in we tracked the dividends for the previous weeks(Links open in new tabs):

70 companies have announced their Dividends so far. These include some of the biggest blue-chip companies such as Coal India, ONGC, Bajaj Auto and many more. 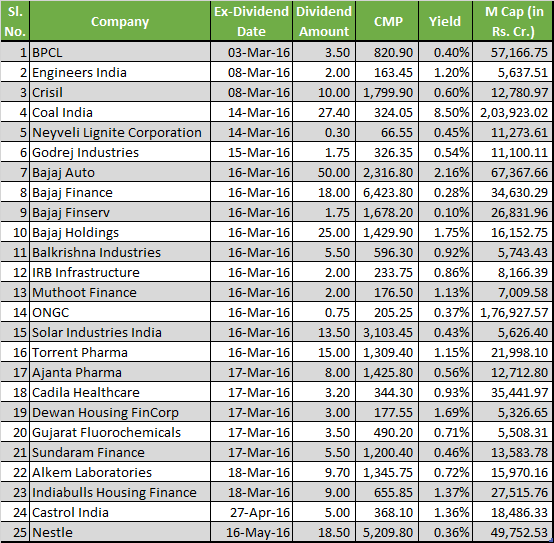 The list above shows only those companies with Market Cap > INR 5,000 cr. For the more comprehensive list of Dividends Announced, check out our Dividend Tracker.

What are the repercussions on the financials of the company that has announced dividends because of this March effect? Consider this: Company ‘A’ makes INR 1,000 as Net Profits for the year. It decides to give out INR 800 to shareholder’s and retain the INR 200. Intuitively, this makes sense. I pay out from what I receive.

Coal India had an EPS of INR 5.89. But Dividends of INR 27.4 per share? Where would these additional funds come from?

What this means, is that in order to distribute cash to their share-holders, companies will have to draw down their Equity Reserves. This could have some major ramifications on the capital structure of the company. For instance, let’s consider a hypothetical company ‘Jaitley Needs More Cash Inc. (JNMC)’. JNMC has equity of INR 100, which includes Share Capital of INR 25 and Reserves of INR 75. It also carries debt of INR 50, bringing the D/E ratio to a healthy 0.5.

What if, because of the new taxation rule, JNMC decides to issue dividends of INR 25? This will have to come from the Reserves, thus bringing Equity to INR 75. The new D/E is now 0.67 – a 34% increase!

Of course, this is a massive simplification of the real facts. Let’s look at the companies with the highest Dividend Yields as per their latest announcements. We performed this analysis for the Top 5 companies in this list as of 9th March, based on Dividend Yield. The results, may surprise you:

If we make the simplistic assumption, that all the Profits earned during the 3 quarters of FY 16 so far, would have been added to the P&L account, we can arrive at the current Book Value of Shareholders’ Equity – that is the BV as of March 31, 2015 plus Profits of the 3 quarters.

This is not a surprise for Coal India investors. The last 2 years (FY15 and FY14) saw something very similar happen.

If you see, the Reserves are now lesser than what they were at the end of FY13!

What Happens After the Dividend is Announced?

Their share price would subsequently drop by the INR 27.4 on the ex-date; albeit only for a short while until Investors start to bring the prices up and down based on Demand and Supply. The net effect is that 25.30% of the equity book value is being realized as cash right now, as opposed to retaining it for investing in growth opportunities or expansions. Cash now, vs uncertain higher cash flows later.

We will publish a post daily with some insights on what Dividend Announcements means for the companies as we go along. For a short summary, do have a look at the Dividend Tracker which we have created, and which we update daily. You can visit the Dividend Tracker page to keep a lookout for those of your investments declaring dividends. Hope you find this tracker useful. Do share your comments and views. If you also like us to track any additional details, do let us know and we will make our best effort to incorporate them.