Lupin was and is all over the news. Why? Yesterday IIFL published an article in relation to the FDA’s inspection of Lupin’s Mandideep facility based on a report (we haven’t seen this report yet). Flashback to the fact that the company’s Goa plant was under scrutiny by the US FDA just last week and there was no information about the Mandideep facility scrutiny.

Excerpts from the IIFL report:

Lupin’s Mandideep unit which manufactures the key revenue contributing Cephalosporin product range along with several large APIs was inspected by USFDA between 8th Feb and 19th Feb 2016. Both the API as well as the Formulations unit at the facility were inspected and were issued a ‘483 letter.

There are only two observations for each of the API and the Formulation units. Our read of the observations is that they are of serious nature. We believe that Lupin will take 18 months to complete remediation at Mandideep.

With Goa and Mandideep, almost entire US business for Lupin (ex-Gavis) has come under regulatory scrutiny. We had downgraded the stock to ADD on account of repeat observations in Goa. We will review our rating with the new event. (refer table at the bottom with the management comments).

It wasn’t a major issue that the company’s Goa plant was under fire from the US FDA since there have been a wave of inspections, Form 483’s and Warning letter issued by US FDA to other Indian Pharma manufacturers as well – Sun Pharma, Dr. Reddy’s, Cadila Healthcare, IPCA Laboratories, Emcure Pharma and not to forget the UKMHRA notice on the Marksans Goa plant.

The issue reached a boiling point and affected the share price only because of a single reason i.e. The company failed to confirm or dismiss the IIFL report which was a bad good sign as the company should have been the first to disclose the inspection details rather than a third party disclosing it to the general public leading to a crazy merry go ride of the stock.

The company did come out with an update earlier yesterday stating the speculation of the audit at Mandideep facilities and the observations along with it. The company clarified this only around 2pm after the merry go ride though the markets were soothed by the Morgan Stanley report (we haven’t seen the report yet) – The observations may be benign as all the four are classified as voluntary action initiated, Morgan Stanley said quoting the company’s management. The international brokerage does not see the issue escalating into a warning letter for the facility.

If you dig a little deeper and listen to the December, 2015 earnings call – the company did mention that 3/12 its plants had received Form 483 i.e. Goa, Indore and Aurangabad. This is what the company said earlier:

9 out of the 12 audits were without any 483. We had 9 observations in Goa and 3 each in Indore and in Aurangabad; Indore, we have already had a close out, Aurangabad, we believe is going to be fine as well. Goa, we have answered all the issues that the FDA had raised, we believe that we addressed them to the FDA satisfaction, of course, we are chasing the FDA to see if they concur and do a close out on the EIR, that has still not happened, we followed up with the FDA and they said that it is still pending final review, so we are waiting for it to be closed.

There was no mention of the fact that the Mandideep facilities (the facility contains 2 units i.e. 1 for API Manufacturing and the other unit for Formulation) was being re-scrutinized as the earnings call took place.

Based on the data available from US FDA, there are 10 manufacturing units registered with the US FDA and with the above comment provided by the management in its earnings call, it is clear that the Mandideep facilities were being re-inspected due to some earlier irregularities. This is also ironed out by the fact that the company received the EIR with the VAI status (explained below).

The Form 483 (explained below) has not been made public by the US FDA and is available only under the Freedom of Information Act. However, the company did come out with another press release today:

In connection with the note published by IIFL Capital, here is the clarity being provided on the observations: 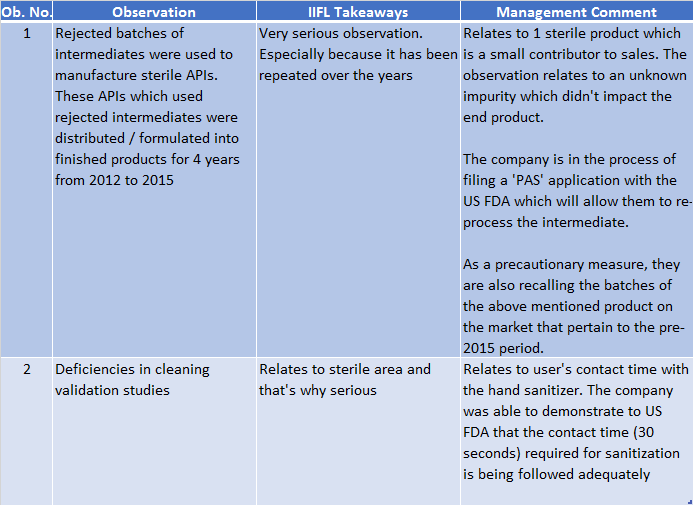 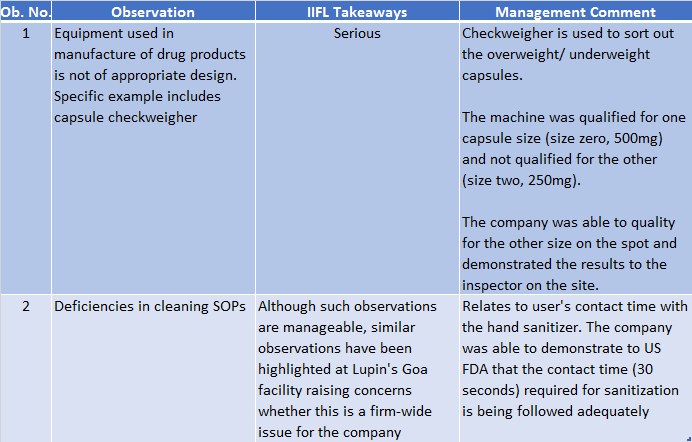 Since the company confirmed there is no financial impact, it is not so much of a worry. But in this case we rest our thoughts since it would be inappropriate to take a call based on the data disclosed by both the parties (IIFL and Lupin). We will wait for the FDA to release the copy of the Form 483 issued to Lupin so that we can better judge the extent of the hit the company would need to take.

Note that they haven’t got an import alert; which means they CAN export from that plant. They haven’t even got a Warning Letter – which would only apply if the response to the Form 483 was not adequate. They have already recalled the API that was apparently under concern. Without a warning or an import alert, there is no impact to future exports to the US from Mandideep by Lupin. There is
also no ANDA that has been filed from the Mandideep plant, so future approvals are also not at stake.

If the above statements are true, then the financial impact to the company is tiny. However we need to see the actual 483 form to understand if the story is complete or if there are more missing links. This form may not be available for a while since the FDA updates its web site with a huge lag.

Also please note that Lupin has 7 more FDA approved plants, and the management has mentioned they have all been inspected. If that’s the case, then will the market see yet another shocker in terms of FDA form 483s soon? The concern now is that the management is not revealing information on it’s own, and we are finding out about FDA inspection results from brokerages instead. This is not good corporate governance.

This form with the eponymous number 483 is used by the investigator conducting the investigation (FDA investigator) in order to document his findings. It is delivered directly at the end of the inspection and should be answered officially. The answer is expected within 15 working days after issuing Form 483. This is the only way to ensure that the response is taken into account when a warning letter (see below) is issued. However not in every inspection a Form 483 is issued.

The EIR is issued by the investigator in addition to Form 483. This should be done within 30 working days. The EIR will then be reviewed by the competent FDA centre. The following statuses are assigned:

NAI: No Action Indicated – there were no objectionable conditions found during the inspection.

VAI: Voluntary Action Indicated – there were objectionable conditions found but the authorities do not need to take any measures. All measures (CAPAs) by the company are taken on a voluntary basis.

OAI: Official Action Indicated – there were objectionable conditions found and further regulatory action is initiated (such as a Warning Letter).

The EIR is made available to the inspected company, but it can also be requested by other companies under the so-called “Freedom of Information Act”. Experience has shown however that it can take quite a long time until an external EIR is transferred.

A Warning Letter is issued especially in the case of serious findings or if the response to Form 483 is classified as inadequate. After the review by the competent centre, the District Offices issue the warning letters and not the investigator himself. The company is obliged to comment in due time and explain in detail how the failure will be corrected and its recurrence prevented (CAPA). Warning letters are generally published on the FDA homepage.

You can the latest posts containing the copy of the form 483’s below: (these are accessible only by premium subscribers)