Jindal Steel and Power Limited has been downgraded to “default” (D) by Crisil. The rationale is simple:

The rating downgrade reflects delays by JSPL in payment of interest on its term loans; the delays were due to weakened liquidity. Liquidity deteriorated significantly as the steep fall in steel realisations coincided with high debt repayment obligations. Pressure on liquidity intensified further due to delays in materialisation of asset monetisation plans and refinancing of debt.

JSPL’s steel business remains vulnerable to volatility in demand and in prices of metal, while its power business is susceptible to demand and price volatility in the merchant market and lack of raw material integration. The group is also exposed to risks related to regulatory changes in the mining sector. However, it has a healthy market position in the steel industry, value-added product profile, and proximity to raw material sources. Successful debt refinancing and asset monetisation will be critical for the group and will assist in tiding over the current liquidity constraint.

Means: they have to roll over loans, and they have to sell assets. Apparently, the problem isn’t just local. JSPL has also, it seems, defaulted on a $25 million loan from a Japanese bank. This has prompted other lenders to do an “early recall” of other loans to JSPL that, if it happens, will require JSPL to pay up $550 million.

This is not yet a bank default, perhaps

Banks get to wait 90 days before calling a loan an NPA. And currently, only that bank which has seen an actual default takes the hit after 90 days; while other banks should technically be sharing information and also marking down provisions for a JSPL loan. If JSPL can default with Bank X, it can also default with Bank Y.

Bankers have traditionally been very lax about such events. They prefer to wait until the shit hits the fan and then claim helplessness. At this point, this is no longer acceptable. They waited with Mallya (and continue to not take over his 1700 cr. holdings of UB, for inexplicable reasons). But JSPL has over 39,000 cr. in loans – it’s 5x Mallya. (The Kingfisher Airlines default was 7,500 cr.)

The right thing to do now, would be to immediately work with Jindal on taking over management control and/or selling assets forcibly to cut exposure; the process is going to take over a year. But we believe banks will somehow give JSPL money through a restructuring or a 5/25 scheme to push the problem further down the line.

We wrote last month (The Risk in Debt Funds Surfaces as JSPL gets Downgraded) that JSPL is a massive default if it occurs, and in mutual funds, Franklin MF had the biggest exposure. While they have cut their exposure to half in February, here’s the situation as of Feb 29:

(This doesn’t include Jindal Power, which will likely be affected only when it is downgraded as well)

For Franklin, even though their holdings may not have defaulted, the downgrade to “D” by Crisil itself will mean they have to downgrade the bond values substantially. The mark down will be visible by the end-day NAVs today.

And, it seems, they sold some of these bonds at a 25% loss, according to a report in the Economic Times. A 25% haircut is big but there are two reasons why they would have taken this loss:

We don’t know which of these (or both) impacted the decision to take a large haircut but it gives you an idea of how complex the situation is for bond funds; for them, a default is immediate, and they don’t get 90 days to call something an “NPA”. They have to act really fast. 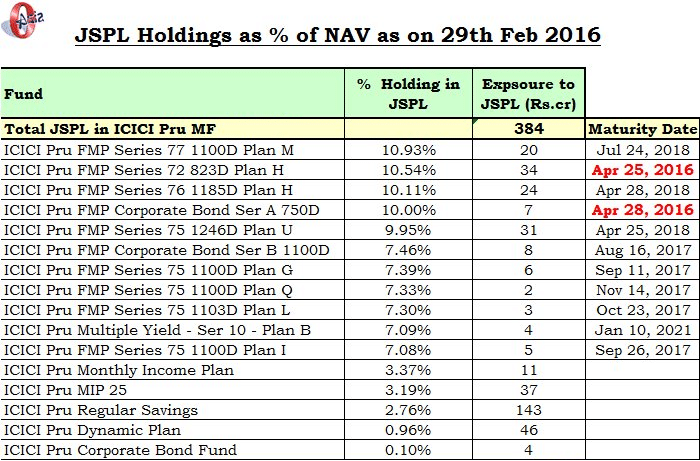 FMPs are more complex. You can’t exit, as an investor in the FMP. The maturity is fixed, so investors will only see the loss – the fund, here, has no redemption pressure. However, look at the size of the exposure here – 14% of one fund! And in Feb, the last downgrade was just a couple notches – this time, it’s a full downgrade to default, so the hit will be higher.

Note: According to value research, the Series 77 Plan M fund saw a drop to 10% in terms of JSPL as a % assets.

Should We Sell All These Funds?

You can’t do anything if you own the FMPs. You just have to wait.

If you own the Franklin or ICICI funds, the hit will be taken today. Even if you do exit now, you will take that hit. At best you will save yourself further damage.

Franklin MFs are known to have less-than-pristine debt on their books. That’s how they even got some fancy returns. We even wrote about other companies that haven’t defaulted but have very little owned cash flows, whose debt is owned by Franklin Templeton MF. Many advisors know this. And that’s fair to take a higher risk for a higher return. But many such funds don’t give you the impression it’s higher risk (like a “low duration” fund, or a “short term income” fund) and while advisors should tell you that about this risk, they either choose not to, or simply don’t know.

I have been on record saying the exposure to such debt funds should be reduced to a much smaller exposure, so much that you are okay if there are a few such defaults (where the time for recovery is longer). If you can’t stomach any risk, then you shouldn’t even be i
n such funds (or, for that matter, in most corporate bond funds).

The JSPL situation will see some action soon. Either banks will give it more money and push the problem forward, or they will become an NPA in bank books. The fact that it’s a 39,000 cr. loan default will ensure that banks fight to the end to not have to call it an NPA. But a default in two places – a foreign loan and a local loan – indicates big trouble. Even with minimum import prices and increase in steel duties in India, a global player like JSPL can’t really compete internationally. This is a warning bell for all steel companies and the banks or funds that lend to them.