The defence ministry has revealed the new Defence Procurement Procedure from private companies, in the Defence expo in Goa. The policy intends to increase the participation of domestic Indian companies as suppliers for defence expenditure.

What is the meaning of DPP?

Defence Procurement Procedure (DPP) is a set of guidelines approved by Defence Acquisition Council (DAC) for procurement of defence equipment and technology. Though defence procurement is a complex and strategic process involving various factors, DPP only provides the framework and criteria for allotment of defence contracts to private players. 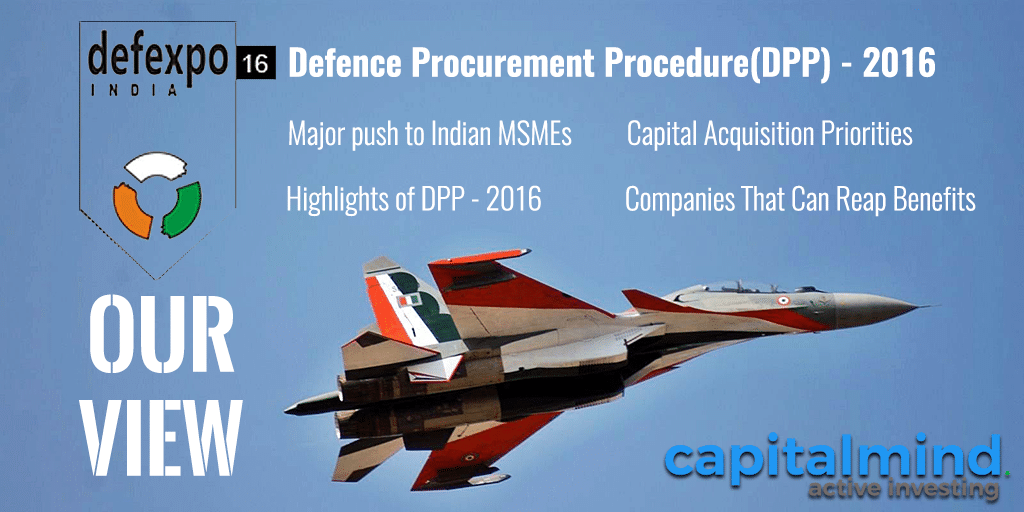 With the new DPP, the government has given a big push to the domestic players in the defence sector. The DPP has a new category called Indian Designed Developed and Manufacture (IDDM) and it has been given the highest priority. Technology development plays a vital role in defence sector but not much importance has been given till now, but with the new DPP in place – design and development has been given the highest priority, pushing the private players to invest more into Research and Development.

With 100% refund in delay of procurement from vendor by the government is definitely a pro defence industry step. The government will pay if they delay their procurement by more than 24 months, including R&D cost. With India being the world’s largest importer of arms (Source), the DPP 2016 takes the first step towards making the Indian defence system self-reliant and cutting down imports.

DPP 2016 explicitly mentions that the following priorities have to be taken into account while procuring the defence equipment, in the order of high priority to low priority.

The basic idea behind the 2016 DPP is to give the domestic defence industry a push and make it a manufacturing hub with initial technology from the foreign partners. With the new category IDDM, there’s definitely a huge inflow of funds into Research and development sector.

The scope has also been provided for smaller players to supply the Indigenous parts for the foreign vendors. The increase in offset to Rs 2000 Cr. from previously Rs 300 Cr. has been put in place because foreign players used to easily inflate contracts above the lower limit of 300 Cr. just so that they can cover the investment (30% of the product deal) they need to do  in Indian firms because of offset clause.  (Contracts above the limit don’t have the indigenization requirements)

With 100% refund for delayed procurement by government addresses the previous issues of risk taken by industry on R&D. On the other end, the government has also put liquidated damages charges if there is delay in delivery by the vendor. (1.5% per week, maximum up to 15% of contract value.)

The earlier DPP didn’t entertain single vendor situations, but now in case of single vendor bid, the procurement commences if all the criteria are met.

Though the new DPP is revolutionary compared to its predecessors but still the defence industry in India faces problems. The first one being the monopoly in defence technology maintained by government backed defence PSU’s and the second being the partiality towards the foreign vendors. Majority of the technology is controlled by PSU’s and domestic private players are just meager assemblers or supplier of small parts. For domestic private players to come in the forefront is still a long way away.

Compared to foreign vendors Indian manufacturers need to wait for the c
ertification from defence ministry whereas foreign vendors are self-certified. Also the foreign vendors are exempted initially from customs duty where as domestic vendors need to get their duty (excise/customs) reimbursed which is a tiring process. Still, the new DPP is definitely aiming towards the positive side of the Make in India program and is a pro Indian defence industry.

Astra Microwave: Provides technology and equipment for RADAR, telemetry and ground based surveillance for defence. Has made a JV with Israel’s Rafael tactical radio communications and electronic warfare systems

Nothing changes overnight, but this policy will help Indian manufacturers provide more to our defence procurement, which is the single largest expenditure (after interest payments) of the central government. Foreign vendors have been preferred largely because politicians have been able to channel kickbacks from them abroad, and the biggest example was the Bofors deals in the 80s.

Now that we can buy more from India, it’s up to companies to step up their manufacturing to meet defence requirements. It’s also up to the government to reduce corruption so that defence bureaucrats will not jeopardize procurement from Indian players. In fact the defence Minister Parrikar has said to the effect that instead of bribing people, just reduce the price of your contracts instead!

Either this becomes a new era in the Indian defence sector, or the bureaucracy gangs up to hurt the intentions of both maximizing Indian content and minimizing corruption. Time will tell, but let’s hope it’s all positive.