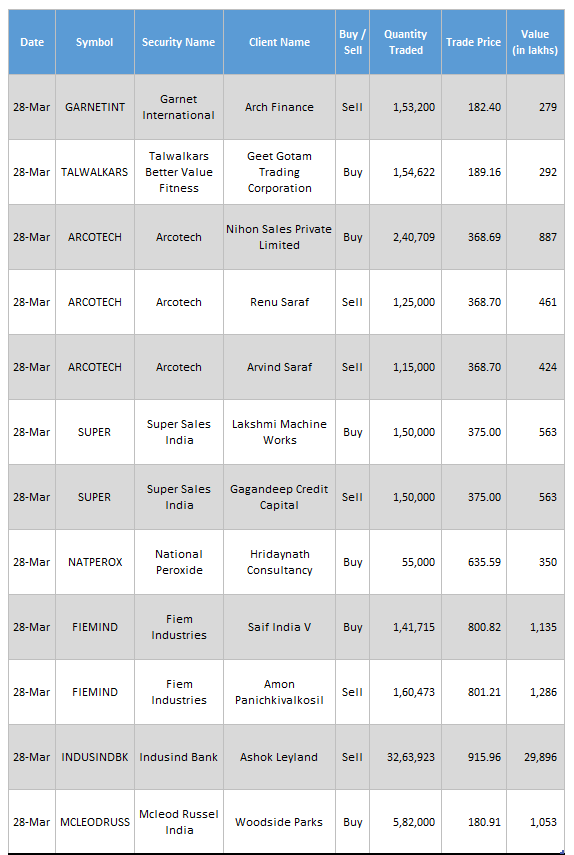 The company has established itself as one of the leading Non-Ferrous Engineering Industry mainly in Copper/Brass Strips and Foils in the Country by creating a niche in producing micro thin foils up to 0.035 mm. The company produces all Non-Ferrous alloys i.e. Copper, Brass, Phosphor Bronze, Nickel Silver, Nickel Brass, Cupro Nickel, Aluminium Bronze, Tin Bearing Copper and Silver Bearing Copper etc.

The Company’s manufacturing facility is in Industrial Growth Centre, Bawal which is conveniently located on the National Highway No. 8 and is only 60 kms from the Indira Gandhi International Airport at New Delhi.

Saif India V – a registered FII purchased 141,715 shares or 1.18%. This was sold by an individual Amon Panichkivalkosil.

The company is engaged in the business of infrastructure and finance. The Company has also entered into the mining sector and textile sector. The principal business activity of the Company includes trading in shares. Its segments include Shares and Securities, and Textile. Shares and Securities Segment consists of income from share trading, intra-day transaction, investments and dividend. Textile Segment consists of sales of garments and dyeing done on job work basis. The Company, through its subsidiary Sukartik Clothing Pvt Ltd, manufactures seamless garment.

IndusInd Bank Limited is a Mumbai based Indian new generation bank established in 1994. The bank offers commercial, transactional and electronic banking products and services. IndusInd Bank was inaugurated in April 1994 by then Union Finance Minister Manmohan Singh. IndusInd Bank is the first among the new-generation private banks in India.

McLeod Russel India is the world’s largest tea growing company. They manufacture approximately 100 million kilograms of high quality tea a year from our tea estates in Assam and West Bengal, India, Vietnam, Uganda and Rwanda and are responsible for employing over 90,000 people.

NPL is a pioneer in India for peroxygen chemicals and is the largest manufacturer of Hydrogen Peroxide in India, with an installed capacity of 95,000 MTPA on 50% w/w. basis. It’s fully integrated manufacturing site for Hydogen Peroxide is located at Kalyan in Maharashtra (India).

Hydrogen Peroxide is a highly versatile chemical used in various industries for Bleaching, Chemical synthesis, Environmental control/ Effluent treatment, Sterilisation etc. The single most important constituent of Hydrogen Peroxide is the “active oxygen” that it provides in the aforementioned end-uses.

Talwalkars Better Value Fitness Ltd, popularly known as Talwalkars, is India’s largest chain of health clubs. It has 152 Health Clubs across 80 cities in India on a consolidated ba
sis, with over 200,000 members.