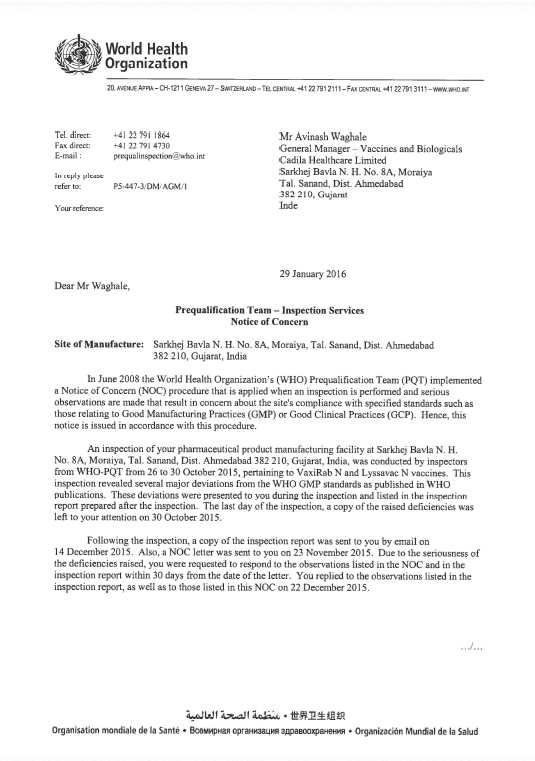 Cadila Healthcare was slapped with a World Health Organization (WHO) Notice of Concern (NOC) on the 29-Jan-15 (Note date: It’s three months ago) for the serious observations for not maintaining Good Manufacturing Practices (GMP) at the company’s Moraiya manufacturing facility in relation to 2 vaccines i.e. VaxiRab N and Lyssavac N.

When the investigation revealed these critical issues (26th to 30th October, 2015) – the company immediately stopped production, conducted an internal investigation and initiated a voluntary recall of all the batches of Lyssavac-N (Anti-rabies Vaccine) manufactured after April 2015.

WHO has said that it will withhold prequalification of all new products manufactured at this site within a reasonable time frame. The suspended manufacturing activities for vaccines and biologicals at this site will only resume after acceptable CAPAs have been submitted, assessed and confirmed through an onsite inspection to have been effectively implemented. If the observations are not corrected within the given time period, WHO will suspend the products listed as prequalified from the Moraiya manufacturing site.

Here are some of the violations highlighted in the Notice of Concerns which the company is yet to resolve and has time until the end of December, 2016 to resolve this post which a satisfactory inspection activity would lead to lifting of the NOC. The points below do not contain the additional actions/ activities recommended by the WHO in relation to Good Manufacturing Practices (GMP):

Here is what the company said:

“There have been some reports regarding the pre-qualification plant inspection of the vaccines facility by WHO in terms of the possible linkage with our oral solids and injectable facilities at the Moraiya manufacturing complex.

In this regard, we hereby inform that we have a separate manufacturing facility for vaccines and this does not form a part of the oral solids and injectable facilities at Moraiya, which cater to the US markets. Regarding the anti-rabies vaccine manufactured at the vaccine facility we have already responded to WHO and have been implementing remedial measures. There is no significant impact on the business and there were no exports of this product to the US. Thus it does not impact our US business”

The company has already initiated the voluntary recall of the 64 final bulks/ final finished batches if the non-prequalified VaxiRab N vaccine and Prequalified Lyssavac N vaccines ready for local sales as well as to countries including Angola and Georgia.

The impact is that all

Some analysts estimate a revenue hit to the extent of Rs. 35 Crore and this is not the first time the company’s plant has come under fire. Earlier in January, the US FDA issued warning letters to the company for both its Moraiya and Ahmedabad facility. It would be interesting to see if the UK MHRA and other International Agencies also impose such bans and put the company’s manufacturing facility on a watch list. (remember the January US FDA warning letter led to a huge drop in the share price).

While we do not have a call on the company, it’s important to note that the Moraiya facility the WHO has banned imports from, is not the same buildings as the one supplying to the US. The US building has earlier received warning letters from the US FDA already, but those are separate. The immediate damage is that the company loses less than 1% of revenues (Cadila makes 10,000 cr. in revenues per year, and the loss due to this directly is 35 cr) which is peanuts.

But the larger issue is: how the heck is a company like Cadila getting a
way with false data, and a badly designed quality system? How can drugs that test positive for contamination be recorded as uncontaminated? Obviously this is a failure of the company, not just the tester involved. This brings into question the drug testing techniques they currently employ anyhow; and if the culture of doing such things is not addressed, there will only be more such alerts in future.

Here is what others had to say about this:

Disclosure: Capital Mind had earlier recommended Cadila Healthcare as part of a momentum portfolios, but at the moment it is not a stock in any recommended portfolio. The authors at Capital Mind  do not own it in their personal/family accounts, and the company does not own any position in the company’s stock. There is no business relationship between the companies mentioned and Capital Mind.