The Budget 2016 saw several small changes here and there, while the truly substantial ones were hidden deep in the fine print. Nothing truly head-turning, but a few were definitely eyebrow-raising; the EPF taxation issue and increased Service Tax come to mind. We had written a post as soon as the Budget was out on Feb 29, giving you small tidbits about what the key take-aways were.

Among the more talked-about news regarding the Budget, revolved around the issue of Indirect Taxes. This Budget focuses on meeting the fiscal deficit targets as stated by the FinMin (3.5%) through increased taxes, and a reduced growth in Expenditure. One such way, is through Indirect Taxes.

To put it simply: Indirect Taxes are taxes that the end-consumer pays for indirectly, as opposed to a Direct Tax such as Income or Capital Gains Tax, which you would pay straight to the government coffers. Indirect Tax is usually levied on the price of a good or a service. Because this tax is supposed to hit the end-consumer, the middle-man or the ‘agent’ whose service you avail of, collects the tax from you, and pays it to the government on your behalf.

But that was just the starting point. How has it changed over the years?

Remember that teeny-weeny line item on your pub bill which says “Swachch Bharat Cess’? Indirect Tax. Introduced in the previous Budget. How about that annoying item, which coaxes you into buying a Rs. 150 serving of ice-cream, only to realize that something called VAT has bumped up the actual price to Rs. 175. Yup, Indirect Tax. As is the ‘Service Tax’.

Ever wondered: Why are petrol prices still the same, when crude oil is tumbling in the markets?! Well, because the government jacked up the Excise Duties levied on fuel, thereby negating the positive effects of a crude oil drop. This is also a form of Indirect Tax, as the effects are passed down directly to the consumer.

There are many theories around the application of Indirect Taxes, and its usefulness to an economy, apart from raising funds for the Central Government. The problem with Indirect Taxes, is that everybody pays the same amount of tax for the same good/service, regardless of their income. The poor and the rich pay the same, which isn’t the case for Direct Personal or Corporate Income Taxes. It is for this very reason, that arguments have been raised calling Indirect Taxes a regressive regime.

Now, did we mention the part where it lines the country’s pockets? Right, then why bother, it is always going to be around.

Every year, the Budget gives the Finance Ministry a chance to review their tax policies and the efficacy of the tax regime that was in place for the preceding 12 months. Indirect Taxes are a key component of the Revenues earned by the government – in fact, for 2015-16 and 2014-15, Indirect Taxes accounted for  48.21% and 43.85% of Gross Tax Revenues respectively.

Budget 2016: Pay Pollution Cess on Cars and even more on SUVs

Budget 2016: Update from FinMin: PPF Is Not Taxable, But EPF Corpus is Taxable at Exit And More 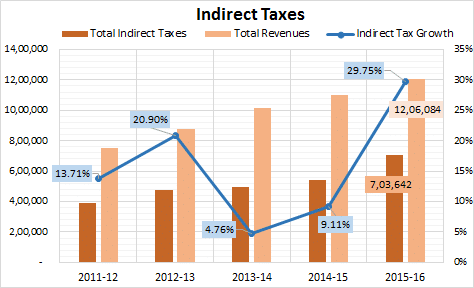 Indirect Taxes was 8.6% greater than was expected, mainly coz of increased excise revenues from crude oil. It was in fact higher than the previous year by 29.8%! This was despite reduced inflation. Inflation as you know, increases prices, which in turn increase Indirect Tax collection as these taxes are based on price. Despite the reduced inflation, Indirect Tax Collections were much higher than FY 2014-15; this was mainly due to the massive excise duty collections on Crude Oil. Excise Duties saw a mammoth near 50% jump from the previous year!

Indirect Tax Collections are expected grow 10.8% through to next year.

Thus, making a few adjustments to the items covered under Excise, Customs or Export Duties, or by increasing the rates charged on such items, the  government can massively affect Tax Collections. Tax Collections are the major contributors to Revenues and the ability to augment revenues can have a significant impact on the fiscal deficit. Fiscal Deficit is an issue that has been given much importance by both the RBI and the Finance Ministry, as a skewed Fiscal Deficit metric can have dangerous repercussions for a growing, developing economy such as ours.

This Budget gives the FinMin, the chance to overhaul the policies or make minor changes, in order to balance their books. Let’s see what the FinMin had in store for us this year, as far as Indirect Taxes are concerned.

If you sift through the Budget Memorandum, to the section called ‘Customs’ and past the changes in semantics that were proposed, what you will come across, are certain products for which the customs rate have been increased. These include:

Even export duties have been modified; a few of them quite surprising:

Levied on the sale, or production for sale, of specific goods or a tax on a good produced for sale, or sold, within a country or licenses for specific activities. There are some usual victims here, including:

You can read more on the Impact of the Budget on Service Taxes in our post.